Sharyl Attkisson, CBS’s top investigative reporter: gone, resigned, floating free, unchained, now viewed by the news establishment as an outsider, a defector, a weirdo with an axe to grind.

Among the controversial stories she covered at CBS: Fast & Furious and Benghazi. Just as she was digging below the surface of the Obama Benghazi coverup, she was cut off and shut down by her network bosses.

Here’s the crux. The Rhodes brothers. Ben Rhodes, David Rhodes. Ben is a deputy national security advisor to Obama and writes speeches for him. In September 2012, Ben was “instrumental,” according to ABC News, in changing the White House talking points (the story) on what happened in Benghazi.

Ben’s brother, David, is president of CBS News. Attkisson was working for David. She was investigating all the changes (12) in the Benghazi talking points. She was shut down.

Nothing to see there, move along, eyes straight ahead, go back to sleep, zombie-zombie, it’s all good don’t worry, be happy, hope and change, the audacity of whatever.

Now, on top of this, Attkisson’s computers, at work and at home, were hacked while she was still at CBS. The network acknowledged this and said “they were investigating.” They’re still investigating. So are other unnamed entities. 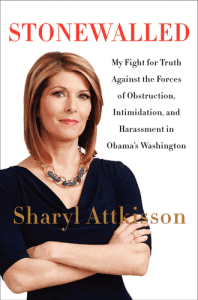 Who hacked her computers? CBS? The White House? NSA? In her book, “Stonewalled,” Attkisson details how her computers were hacked in late 2012 during her reporting on Benghazi. Attkisson alleges that government agencies were behind the attack, and also claims that her TVs and phone were tampered with. Someone she knows finds a “stray cable” attached to her FiOS box, which can be used to download data.

Attkisson covered other stories at CBS that were highly problematic for the White House. Fast & Furious, for example. And in the summer of 2009, Attkisson struck gold on Swine Flu. You know, the pandemic that wasn’t. She discovered that the CDC, which is tasked with tracking numbers of cases of outbreaks, had, get this, stopped counting Swine Flu cases in America. Stopped.

But the CDC was still trumpeting the extreme danger of Swine Flu, with no way to measure its true impact.

Dr. Peter Doshi, long after the whole Swine Flu dud was over, wrote a stunning report for the British Medical Journal Online. Seems that every year, hundreds of thousands of samples from suspected and diagnosed flu patients are sent to labs for analysis—and only about 16% of these samples turn out to be positive for the flu.

That’s a killer of a revelation. Among other things, it means that most people who are told they have the flu couldn’t possibly have been protected by any flu vaccine, even assuming the vaccines are useful and effective…because these people don’t have the flu.

I wrote Attkisson about Dr. Doshi’s finding, and she got back to me, in essence saying, well, yes, this is why the CDC stopped counting Swine Flu cases. Huge numbers of people who were being diagnosed with Swine Flu didn’t have any kind of flu at all. CBS shut down Attkisson on both the Fast&Furious story and the Swine Flu story.

Here’s an interesting bombshell. On April 1, 2011, Attkisson authored a piece for CBS News, “Vaccines and Autism: a new scientific review.” She dispelled the notion that the vaccine-autism connection was a dead issue. All sorts of red flags went up the flagpole. Mainstream media are supposed to treat vaccines, all vaccines, as holy sacraments of the medical cartel. Praise them, bow down to them, never accuse them of doing harm of any kind.

Sumner Redstone, the executive chairman of CBS, Attkisson’s employer, has a very significant stake in vaccines. His Foundation, on its site, states: “The Sumner M. Redstone Foundation’s contribution to the Global Poverty Project raising $118 million in pledges for vaccines…”

Redstone’s Foundation has also donated $1 million to a charity called Autism Speaks, which supports genetic testing for the diagnosis of Autism. You can be sure this charity has zero interest in reviving the vaccine-Autism debate and exposing the fact that there is most definitely a connection.

So Attkisson was stepping on Sumner Redstone’s toes with heavy boots.

The first casualty in mainstream news is the truth.

Attkisson is a whistleblower of sorts in educating the public about the biased media.  Her latest book, The Smear, reveals the tactics used to influence opinions in order to obscure the truth.