Hunter Biden introduced his father, then-Vice President Joe Biden, to a top executive at a Ukrainian energy firm less than a year before the elder Biden pressured government officials in Ukraine into firing a prosecutor who was investigating the company, according to emails obtained by The Post.

The never-before-revealed meeting is mentioned in a message of appreciation that Vadym Pozharskyi, an adviser to the board of Burisma, allegedly sent Hunter Biden on April 17, 2015, about a year after Hunter joined the Burisma board at a reported salary of up to $50,000 a month (NOTE: It was actually $83,333 per month although many media continue to report the $50,000).

“Dear Hunter, thank you for inviting me to DC and giving an opportunity to meet your father and spent [sic] some time together. It’s realty [sic] an honor and pleasure,” the email reads.

An earlier email from May 2014 also shows Pozharskyi, reportedly Burisma’s No. 3 exec, asking Hunter for “advice on how you could use your influence” on the company’s behalf.

The blockbuster correspondence — which flies in the face of Joe Biden’s claim that he’s “never spoken to my son about his overseas business dealings” — is contained in a massive trove of data recovered from a laptop computer. 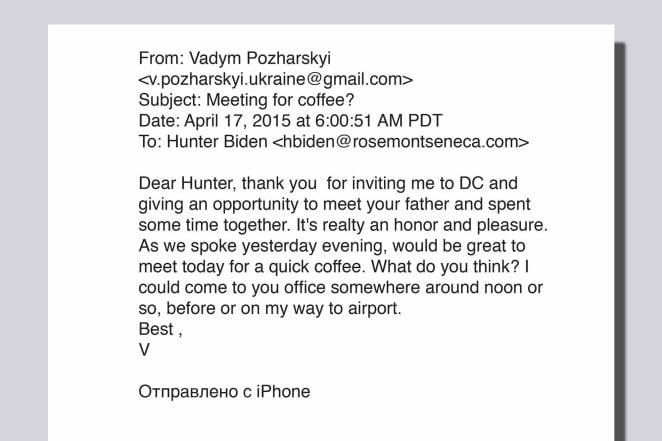 The computer was dropped off at a repair shop in Biden’s home state of Delaware in April 2019, according to the store’s owner.

Other material extracted from the computer includes a raunchy, 12-minute video that appears to show Hunter, who’s admitted struggling with addiction problems, smoking crack while engaged in a sex act with an unidentified woman, as well as numerous other sexually explicit images.

The customer who brought in the water-damaged MacBook Pro for repair never paid for the service or retrieved it or a hard drive on which its contents were stored, according to the shop owner, who said he tried repeatedly to contact the client.

The the FBI took the controversial Biden computer after a subpoena and DID NOTHING!!! Another corrupt FBI cover up again proves they are a deep state organization working against the people, not for them. The FBI is one of the major reasons that Americans feel there is a two-tiered system of justice.  The Democrat Party and its leadership are immune to investigations for their many corrupt deeds but Republicans, unless

Go to Term Page
" >RINO’s, are indicted for made up lies they didn’t make to the FBI.

How many stories landed with the FBI that were ignored because the participants were on the team protected by the FBI?  How many criminals walk free because the FBI buries their crimes and refuses to investigate?  Maybe it is time to shut down the FBI and start over.2