The pro-life advocate group Children of God For Life broke the news that San Diego -based Semonyx  uses aborted embryonic cells to test fake flavoring chemicals labeled HEK-293 (HEK stands for Human Embryonic Kidney cells, with 293 denoting that the HEK was from the 293rd experiment).

The 1973 science fiction film Soylent Green was about food produced from human body parts. Science fiction is now a scientific reality. Famous food companies have now been exposed using tissue from aborted babies to make flavor additives in processed foods. Among the food companies working with Senomyx are: 1)PepsiCo, (2) Nestlé, (3) Kraft Foods, (4) Firmenich (a Swiss perfume and flavoring company), and (5) Ajinomoto Group (makers of meat glue and aspartame).  Campbell Soup severed ties with an outcry from the public and concerned shareholders. In addition, HEK-293 is found in beauty products, vaccines, and medicine. One year after the discovery LifeSiteNews.com reported that the Obama Security and Exchange Commission had decided that PepsiCo’s arrangement with  Senomyx simply constitutes “ordinary business operations.”

“We’re not talking about what kind of pencils PepsiCo wants to use — we are talking about exploiting the remains of an aborted child for profit,” said Debi Vinnedge, Executive Director of CGL, concerning the SEC decision. “Using human embryonic kidney (HEK-293) to produce flavor enhancers for their beverages is a far cry from routine operations!”

The aborted human fetal cell line is known as “HEK-293,” and it is used to see how the human palate will react to synthetic flavors. Since most of today’s processed food lacks flavor, companies like Semonyx are hired to develop flavors on their own.

“What they don’t tell the public is that they are using HEK 293 — human embryonic kidney cells taken from an electively aborted baby to produce those receptors,” said Debi Vinnedge of the pro-life group Children of God for Life. “They could have easily chosen animal, insect, or other morally obtained human cells expressing the G protein for taste receptors.”

According to the Weston A. Price Foundation: “Senomyx’s salt taste, savory flavor, and sweet flavors — as well as all their other flavor enhancers — are purposefully developed so that they stimulate your taste buds without them actually tasting anything … Much like MSG, these flavor enhancers operate on the neurological level to produce these reactions …Since they are not actually ingredients but rather ‘enhancers’ they are not required to be listed in a package’s ingredients except as ‘artificial flavors’ … [And] because very small amounts of the additives are used … Senomyx’s chemicals have not undergone the FDA’s usual safety approval process for food additives.“

“Their products, which are intended to provide enhancements to savory, sweet, and salty flavors, as well as block bitter flavors and provide cooling taste sensations, are being marketed as a way to help companies “improve the nutritional profile of their products and/or achieve a competitive advantage maintaining or enhancing taste.”

The idea is that a food company can use a Senomyx chemical to enhance the sweetness of sugar or savory flavors, allowing them to boast “reduced sugar” or “no MSG,” giving the illusion that the product is healthier. In reality, it will contain a little-tested chemical that is NOT listed on the label.

Amazingly, these flavor-altering compounds are used in small amounts (less than one part per million), which means companies like Senomyx do not have to go through the Food and Drug Administration’s (FDA) approval process typically necessary to release food additives. Instead of the lengthy FDA process, the compound only has to be classified as “generally recognized as safe” (GRAS) by the Flavor and Extract Manufacturers Association —  a process that can take as little as 18 months, with a mere 3 months of safety testing on rats.” – Dr. Mercola

Planned Parenthood’s hand in this nauseating maltreatment of human beings represents only the tip of the iceberg and has been the source of tremendous benefit for one company purchasing PP’s baby parts and then selling them off to biomedical researchers for profit.

That company is StemExpress, and it describes itself as “a multi-million dollar company that supplies human blood, tissue products, primary cells and other clinical specimens to biomedical researchers.” It also boasts of offering “the largest variety of raw material in the industry, as well as fresh, fixed and cryopreserved human primary cells.”

On the company’s site, which has been experiencing difficulty in recent days owing to high traffic, StemExpress openly states in bold print its “human tissue products range from fetal to adult” while guaranteeing that “every sample delivers the purity, viability and quality” the buyers look for.

Taking its cues from Amazon, StemExpress provides easy-to-use shopping carts complete with user-friendly dropdown boxes that allow the customer to purchase products like a “fetal liver” of their choice for as low $610. 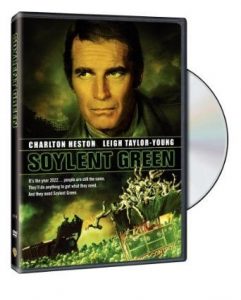 New York. 2022 A.D. Teeming with jobless, homeless people. Teetering on the edge of anarchy, the government rations synthetic food. Those who control the supply have unlimited wealth and power–as long as no one discovers the awful truth behind the source of Soylent Green. Academy Award-winner Charlton Heston (Ben-Hur, The Ten Commandments)stars as Thorn, possibly the last honest detective on the undermanned police force, who investigates the brutal murder of a prominent member of the Soylent Company, manufacturers of the artificial nourishment.During the course of his probe, Thorn discovers the horrifying main ingredient of the mass-produced food. Caught between personal integrity,the quest for justice and knowledge that could lead to the death of millions, will Thorn expose the deadly secret?