Herbert A. Philbrick, nine years an undercover FBI agent, operating in the top level of the Communist apparatus in the United States, had this to say in an article titled “The Communists Are After Your Church!” in the Christian Herald:

“It is no accident that your church is the number-one target of the Communist conspiracy in America today. . . . Virtually no Communist or Communist-front activity takes place today without ministerial and church support, sponsorship or participation…”

In 1942 1 was ordered by the Party to maintain strong ties with the Baptist church, the denomination with which I had been affiliated since early youth. I did this, joining the First Baptist Church of Wakefield, Massachusetts. . . .

“The most shocking fact was that there was also a special subversive cell of hardened, disciplined, trained agents of Stalin, men who were ministers of the Gospel! . . .

“I am not guessing about this.I saw those ministers in action-ruthless Communist leaders, prostituting the Christian ministry to the evil ends of atheism and oppression. They knew exactly what they were doing” (Article, “The Communists Are After Your Church!” in Christian Herald, April, 1953).

Mr. Philbrick worked for nine years with the Communists while counterspying on them for the Federal Bureau of Investigation. He became aware of Communist tactics when he was drawn into the Cambridge Youth League in 1940, and instead of resigning in righteous indignation, went to the FBI’s where it was suggested that he stay and learn more about the league.

His nine years of counter-espionage ended with his testimony at the trial of the eleven top U.S. Communists before Judge Harold Medina in 1949. His testimony cracked the Communist defense and helped convict them of conspiring to overthrow the U.S. Government.

The people of this country, Mr. Philbrick stated, are barraged with the greatest amount of information and misinformation ever in history. Some commentators try to emphasize the bad points of the American system, he declared, and point out that the people of this country are supposed to be living in fear, afraid to express opinions because they may be investigated by the FBI or congressional committees. 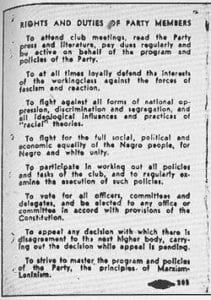 “The reason for this is that most Americans are optimists and don’t like to face unpleasant facts. The average decent American citizen finds it difficult to comprehend the criminal mind of a communist and his teachings to overthrow by force and violence the government of this country, and establish in its place the socialist regime of Soviet Russia.”

Many times, he added, in his nine years in the party he heard things he could hardly believe.

As to what makes a communist, and how and why some persons turn traitor to their country, Mr. Philbrick used his own case as an example. He was duped and victimized, he said, in 1940 to join what proved to be a communist front organization, a fact which he discovered six months later, he declared. He stayed in, he said, because he wanted, as a liberal, to learn some of the answers for himself.

“But disloyalty is what the Communist criminal conspiracy had to change, because it is impossible to be loyal to your country and a communist at the same time. The teachers who work on the youths work on the mind, heart, and soul to make them hardened, steeled, disciplined Communists.

It took two long years, Mr. Philbrick said, before his teachers were satisfied that he could adhere perfectly to the dictates of the Communist Party, and had learned absolute discipline and blind obedience to the dictates of Moscow. At first, they pointed out, he and those accepted with him as Communists had to do all the dirty and unpleasant jobs, such as foment riots and civil unrest, peddle the Daily Worker and perform any other acts the party officers gave them.

At first, he continued, he did not realize the full significance of Communist insistence on secrecy of membership and their instructions to swear that he was not and never had been a member of the Communist Party or the Youth League.

Young people must be reeducated and taught Communist ethics, Mr. Philbrick continued. They must be so imbued with these ethics and Communist morality, he charged, that they must be prepared to repudiate ethics and morality as they are usually taught. For this reason, he declared, no Communist should ever be permitted to teach in our schools.

Communist morality, he stated, goes a step further in that it must be subordinate to the teachings of destruction of established governments.

By 1945, he continued, he was chosen, along with 15 others, after intense screening, to attend a deeply secret training school at which, for a period of ten weeks the Communist teachers, who were never named, taught and advocated that it is the absolute duty of every Communist to work for the complete destruction of the United States and work towards the establishment of a Communist state by any and all means. “This, mind you,” he said, “during the latter part of the war when Russia was our ally!”

“Communists have been taking over territory at the rate of 8,000 square miles per day, everyday, and the free people of the world have not won back one inch of that territory!” he declared. “The tide won’t turn,” he declared, “until we wake up, lose our apathy, and face facts.”

Communism as one very great weakness, Mr. Philbrick stated, and that weakness lies in the hearts, minds and soul of the little people behind the Iron Curtain, despite persecution purges, and brainwashing. “

“If the Communists thought they could win,” Mr. Philbrick declared, World War III would now be under way. But they don’t dare start it as long as they can’t depend on the people behind the lines.

“Our responsibility, he declared, “is the fight for freedom which is not free, but which must be earned. Only then can we do our part on the outside, as those behind the Iron Curtain do on the inside.

“Sometimes this shows up in church literature. The Communist Party leans heavily upon publicly printed and distributed magazines, papers and books which do not bear Communist Party identification as such. But one can spot the Communist influence by the terminology often used-the scoffing at capitalism, the labeling of the United States as ‘imperialist,’ the sneering directed at the profit motive. America is not wholly perfect. But neither is it wholly imperfect, as the Communists would have you believe.”