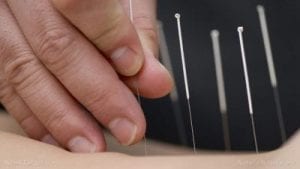 Acupuncture can alleviate the intensity and duration of menstrual cramps significantly, a recent study suggests. The Chinese traditional therapy was found to reduce these symptoms in more than half of the women in the study over eight weeks of treatment, with at least a 50 percent reduction in the reported severity of pain. Some of the participants even claimed to feel the benefits of the technique 12 months later.

The treatment could bring good news to the millions of women who suffer from period pain during their reproductive years. The therapy may be used to relieve various kinds of discomfort such as migraine, hot flashes in women during menopause, and chronic pain for people suffering with fibromyalgia.

Researchers found that traditional Chinese acupuncture, which entails inserting extremely fine needles into the skin at specific pressure points, brings greater pain relief compared to electro-acupuncture. The needles supposedly work by triggering the release of endorphin, the body’s natural pain-killing chemical, and serotonin, a chemical that affects a person’s mood and behavior.

Menstrual cramps, medically known as dysmenorrhea, are painful sensations felt before and/or during a woman’s period and can range from mild to severe. Pain occurs in the lower abdomen and lower back. The pain normally lasts for 48 to 72 hours, although it be longer in some women.

The pilot study involved 74 women aged 18 to 45 years with suspected or confirmed period pain. The participants kept a menstrual diary and were given both traditional acupuncture and electro-acupuncture therapy in high and low frequencies. A total of 12 treatments were performed over three menstrual cycles. All participants received treatment in the first 48 hours of their period.

Dr Mike Armour, from the National Institute of Complementary Medicine (NICM) in Australia, led the study and said the results are promising.

“Pragmatic trials of acupuncture have shown a reduction in pain intensity and an improvement in quality of life in women with period pain, however evidence has been limited for how changing the ‘dosage’ of acupuncture might affect the outcome.

“Our pilot study found that using manual stimulation of the needles, rather than an electrical pulse, commonly used in many Chinese studies for period pain, resulted in reduced need for pain relieving medication and improvement in secondary symptoms such as headaches and nausea.

“The latter was unexpected and will be explored further in future, larger trials.”

Armour believes that further trials may lead to development of evidence-based guidelines for acupuncture as treatment for menstrual pain.

You can read more stories on how acupuncture can help you at ChineseMedicine.news.