From the “where the rubber meets the road” department, comes this bombshell finding that flies in the face of claims about the universal boogeyman of “climate change” killing salmon due to it supposedly raising water temperature in streams where they spawn.

It seems they were wrong, dead wrong.

New University of Washington research published December 3rd in the journal Science, exonerates “climate change” in the salmon killing caper and finds a surprise villain; an additive to automobile tires, not “climate change.” In fact, the researchers specifically ruled out climate-driven temperature increase as a cause.

Basically, the process is like this: stormwater runoff carries tire wear rubber particles into streams from the nearby roads, where a chemical called 6PPD-quinone, a biproduct from the 6PPD preservative added on tires to prevent breakdown by ozone, leeches into the water. It has been determined that this chemical is highly toxic to salmon. Researchers say they identified 6PPD-quinone as the “smoking gun” behind salmon deaths in freshwater streams.

Here are some relevant quotes from the University of Washington press release, Tire-related chemical is largely responsible for adult coho salmon deaths in urban streams, bold mine:

“We had determined it couldn’t be explained by high temperatures, low dissolved oxygen or any known contaminant, such as high

Go to Term Page
" >zinc levels,” said co-senior author Jenifer McIntyre, an assistant professor at WSU’s School of the Environment, based in Puyallup. “Then we found that urban stormwater runoff could recreate the symptoms and the acute mortality.

“[We]…found something called 6PPD, which is used to keep tires from breaking down too quickly.

“It’s like a preservative for tires,” Tian said. “Similar to how food preservatives keep food from spoiling too quickly, 6PPD helps tires last by protecting them from ground-level ozone.”

“But when 6PPD reacts with ozone, the researchers found that it was transformed into multiple chemicals, including 6PPD-quinone (pronounced “kwih-known”), the toxic chemical that is responsible for killing the salmon.

This chemical is not limited to the Puget Sound region. The team also tested roadway runoff from Los Angeles and urban creeks near San Francisco, and 6PPD-quinone was present there as well. This finding is unsurprising, the researchers said, because 6PPD appears to be used in all tires and tire wear particles are likely present in creeks near busy roads across the world.” 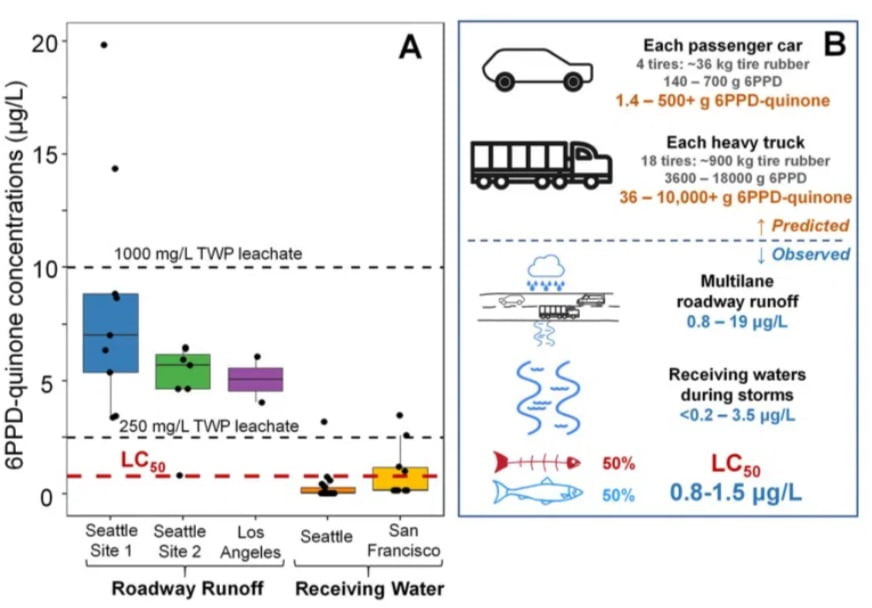 The findings suggest this is a worldwide problem, and since this research focused only on salmon, who knows where else in nature this chemical might be causing trouble.

Historically, climate activists like to use “climate change” as an immediate go-to cause for anything that they can’t explain, which is why I refer to it as the “universal boogeyman”. Now that real science without a climate change agenda has been published on the salmon issue, we can move from a baseless blame-game to a solution.

1 year ago
“These people are not representative of our country’s military,” said General Mark A. Milley, the chairman of the Joint Chiefs of Staff. The Pentagon is investigating veterans and members of the military who were in the crowd during the Capitol building breach on January 6 to combat and identify “white supremacy” and “far-right extremism.” This comes as over 25 thousand troops have been deployed in DC to provide security for the inauguration of Joe Biden due to alleged “external security threats.” So far, the FBI has identified six … Read More

1 year ago
The storming of the Red Fort in Delhi on January 26 marked an escalation of tensions between the Indian government – led by Prime Minister Narendra Modi – and farmers who have been protesting against agricultural reforms since August 2020. With footage of the farmers clashing with police going viral, the Red Fort incident also marked a spike in interest in the farmers’ movement around the world, much to Modi’s embarrassment. The authorities’ response to events at the Red Fort – a historic building symbolic of Indian independence, … Read More

2 years ago
After White House lawyers’ brief rebuttal (less than 3 hours) managed to tear apart Rep. Schiff and the House Managers’ 20-plus-hour ‘odyssey’ in the Senate impeachment trial, is anyone surprised that – right at the last minute – a ‘bombshell’ is leaked to the media that promises – as always – “this time we got him.” This time, The New York Times reports that President Trump’s former national security adviser John Bolton alleges in his forthcoming book that the president explicitly told him” “[Trump] wanted to continue freezing $391 million in security … Read More

2 years ago
Kobe (Covid in Hebrew) was one of those athletes that transcended the boundaries of their sport to become pop culture icons. More than a basketball superstar, Kobe was a household name – the type that was known throughout the world on a first-name basis. He was the personification of success and greatness. On the basketball court, he won everything that was possible to win and he was in the process of passing on this legacy to his four daughters. Off the court, he cashed in on some of … Read More

3 years ago
(CNN) — U.S. Customs and Border Protection made the largest seizure of fentanyl in the agency’s history on Saturday at the Nogales port of entry on the U.S.-Mexico border, Port Director Michael Humphries announced Thursday. Officers uncovered 100 packages of fentanyl weighing nearly 254 pounds and with an estimated value of $3.5 million, Humphries said. The fentanyl was mostly in powder form, with some in pill form. Fentanyl is a synthetic opioid. Unlike morphine or heroin, which are derived from the opium poppy, synthetics such as oxycodone and … Read More

4 years ago
Elite globalist, George Soros, issued a death threat to tech giants over what basically amounts to freedom of speech.  Because globalists cannot control the narrative on the world wide web, condemnation will have to suffice…for now. Billionaire hedge fund manager George Soros slammed Facebook and Google, two companies he’s invested in recently, noting that “the rise and monopolistic behavior” of tech platform companies has become a “global problem.”  Speaking at the World Economic Forum in Davos, Switzerland, Soros, called out Facebook and Google for “exploiting” social environments and causing “a variety … Read More

4 years ago
After 10 months of leading the FBI’s Trump-Russia investigation, counterintelligence official Peter Strzok had not seen compelling evidence that President Trump or high-level campaign officials colluded with the Russian government, according to a person familiar with his thinking. That account comports with a May 19, 2017 text exchange between Strzok and FBI lawyer Lisa Page that was released earlier this week. “You and I both know the odds are nothing. If I thought it was likely, I’d be there no question. I hesitate in part because of my gut … Read More

5 years ago
A dead body hanging upside down, struggling child with a knife to his neck, male & female genitalia high up on the walls of residential buildings. Some residents were shocked and many media outlets reported about complaints by some of the locals. The Bulletin magazine wrote that Brussels-City mayor Yvan Mayeur had said the painting could be seen as a call to violence, while Ans Persoons, Councillor in charge of culture and city planning said “I find it much too violent, and want to see it disappear as soon as possible.” The others, … Read More

6 years ago
Patriot and American hero, Levoy Finicum, who stood up to the fed’s for their massive land grabbing and bullying of small ranchers, was murdered by FBI and Oregon state troopers who tried to cover up the murder. The Hammond’s unknowingly reside on Uranium, metal, and mineral rich land according to a recent study by renowned terra firma researcher Dutchsinse, land that was promised to Russia by the Clinton’s in exchange for big donations to the corrupt Bill & Hillary Foundation that has been a pay-to-play slush fund for their first … Read More

17 years ago
George W. Bush permitted James Guckert to use an unprecedented Secret Service-approved alias (Jeff Gannon) while having access to the White House for two years as a pool reporter and was regularly called upon by George W. Bush and press secretary Scott McClellan during nationally televised presidential press conferences. The White House is the most difficult press conference in the world to attend, and only open to the most credentialed professionals from major media, yet Mr. Gannon received special White House permission without any connection to any media. Gannon … Read More

21 years ago
Following the disastrous earthquake in Gujarat, India of 2001, former president Bill Clinton visited the tragedy-stricken region to flaunt his new nonprofit, the American India Foundation, formed in a response to the devastating earthquake that killed 20,000 and injured 166,000.. The foundation was formed as a partnership between Clinton and millionaire and family friend Rajat Gupta who later spent time in federal prison for illegal inside trading. Upon visiting India, Clinton promised to rebuild 100 villages through the fundraising efforts of the American India Foundation (AIF). But it … Read More

45 years ago
On April 4, 1978, a conversation detailing the reasons for their pro-abolition positions to lower the age of sexual consent to 12 or 13 years of age was broadcast by radio France Culture in the program “Dialogues”. The participants, Michel Foucault, Jean Danet and Guy Hocquenghem, had all signed a 1977 petition, along with other intellectuals, demanding the legalization of pedophilia. Simone de Beauvoir (future feminist icon), alongside most of the Marxist French intelligentsia who signed the petition, also sought the immediate release of three individuals who were … Read More

84 years ago
Red Symphony -Interrogation of Christian Rakovsky, a Rothschild agent who was fighting for his life. His death sentence had already been pronounced. He basically said to Stalin’s men: ‘. . . if you interview me tonight, you will not kill me.” In light of Rakovsky’s powerful connections, Stalin was intrigued enough to order his chief interrogator, Gavriil G. Kusmin, to interview Rakovsky and see what he had to say. Red Symphony is a transcript of the interview – revealing astonishing explanations of Marx, Lenin, Trotsky, Hitler. Moreover, he … Read More

105 years ago
During the crucial years of the school changeover from academic institution to behavioral modification instrument, the radical nature of the metamorphosis caught the attention of a few national politicians who spoke out, but could never muster enough strength for effective opposition. In the Congressional Record of January 26, 1917, for instance, Senator Chamberlain of Oregon entered these words: They are moving with military precision all along the line to get control of the education of the children of the land. Senator Poindexter of Washington followed, saying: The cult … Read More

139 years ago
A speech given by Theodore Roosevelt in Buffalo, New York on January 26, 1883, it probed into the theoretical reasons why every citizen must be involved in politics and the practicality of serving in that capacity. People must not excuse themselves from politics just because they are too busy and then blame the government for its ineptitude. Of course, in a sense, the essential first man to be a good citizen is his possession of the home virtues which we think when we call a man by the … Read More