The number of early deaths caused by air pollution is double previous estimates, according to research, meaning toxic air is killing more people than tobacco smoking.

The scientists used new data to estimate that nearly 800,000 people die prematurely each year in Europe because of dirty air, and that each life is cut short by an average of more than two years. The health damage caused by air pollution in Europe is higher than the global average. Its dense population and poor air results in exposure that is among the highest in the world.

The new research, published in the European Heart Journal, indicates that while air pollution hits the lungs first, its impact via the bloodstream on heart disease and strokes is responsible for twice as many deaths as respiratory diseases. 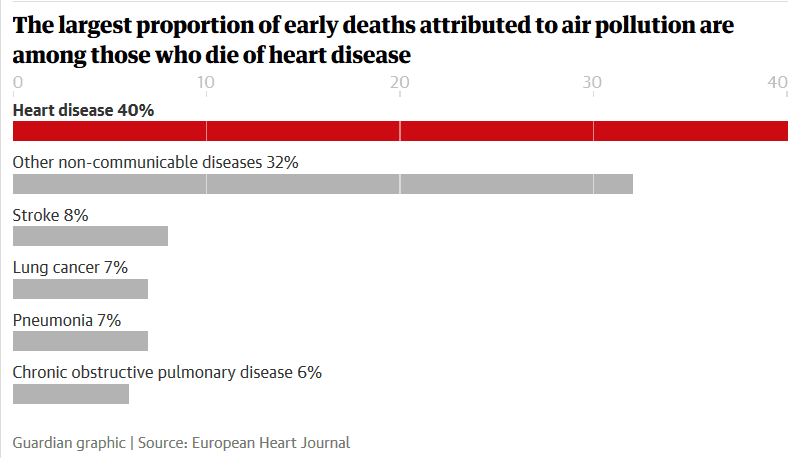 The analysis builds on research published in September and confirms that calculation of 8.8m early deaths a year from outdoor air pollution around the world, double previous estimates.

“To put this into perspective, this means that air pollution causes more extra deaths a year than tobacco smoking,” said Prof Thomas Münzel at the University Medical Centre Mainz in Germany and one of the scientists behind the new study. “Smoking is avoidable but air pollution is not.”

Prof Jos Lelieveld of the Max-Plank Institute for Chemistry in Mainz and also part of the team, said: “Since most air pollutants come from the burning of fossil fuels, we need to switch to other sources of energy urgently. When we use clean, renewable energy, we are not just fulfilling the Paris agreement to mitigate the effects of climate change, we could also reduce air pollution-related death rates by up to 55%.”

The new research combined three sets of data: air pollution exposure, population density and age, and the health impacts of toxic air. It calculated a much higher number of premature deaths because better data on the wide impacts of air pollution is now available. 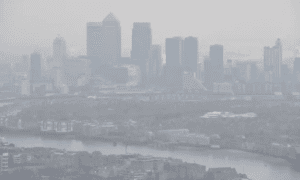 There was previously little data about the effect of high levels of air pollution and results from second-hand smoking studies were used instead, leading to an underestimate of deaths. There are now more than 40 large studies, including important research from China. Research also now covers a wider range of health impacts, including diabetes and high blood pressure, which also increases the estimated number of deaths.

Münzel said small particles, less than 2.5 microns in size (PM2.5), are not paid sufficient attention when tackling cardiovascular disease. “The prevention guidelines for CVD must adopt air pollution as an important risk factor,” he said. The EU’s PM2.5 limit is more than double the World Health Organization (WHO) guideline used by Canada and Australia.

“The EU is lagging a long way behind,” Münzel said.“We as doctors and patients cannot alter the limits for air pollution, so the politicians have to stand up and give us an environment that keeps us safe.”

Prof Metin Avkiran of the British Heart Foundation said: “Air pollution is clearly a huge problem across Europe. We need to see WHO guidelines in UK law in order to drive decisive action to protect the nation’s health.”

The scientists acknowledge there are large uncertainties in their early death estimates for Europe, which range from 645,000 to 934,000. Some deaths could have been misattributed to air pollution, but it is as likely that the true number of deaths could be even higher, they said.

The effects of air pollution on infant deaths was not included, because the evidence is not yet as strong. The new work also only considered PM2.5 and ozone, and not other particles, nitrogen dioxide or other pollutants.