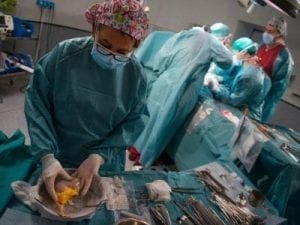 Analyzing medical death rate data over an eight-year period, Johns Hopkins patient safety experts have calculated that more than 250,000 deaths per year are due to medical error in the U.S. Their figure, published May 3 in The BMJ, surpasses the U.S. Centers for Disease Control and Prevention’s (CDC’s) third leading cause of death — respiratory disease, which kills close to 150,000 people per year.

The Johns Hopkins team says the CDC’s way of collecting national health statistics fails to classify medical errors separately on the death certificate. The researchers are advocating for updated criteria for classifying deaths on death certificates.

“Incidence rates for deaths directly attributable to medical care gone awry haven’t been recognized in any standardized method for collecting national statistics,” says Martin Makary, M.D., M.P.H., professor of surgery at the Johns Hopkins University School of Medicine and an authority on health reform. “The medical coding system was designed to maximize billing for physician services, not to collect national health statistics, as it is currently being used.”

In 1949, Makary says, the U.S. adopted an international form that used International Classification of Diseases (ICD) billing codes to tally causes of death.

“At that time, it was under-recognized that diagnostic errors, medical mistakes and the absence of safety nets could result in someone’s death, and because of that, medical errors were unintentionally excluded from national health statistics,” says Makary.

The researchers say that since that time, national mortality statistics have been tabulated using billing codes, which don’t have a built-in way to recognize incidence rates of mortality due to medical care gone wrong.

In their study, the researchers examined four separate studies that analyzed medical death rate data from 2000 to 2008, including one by the U.S. Department of Health and Human Services’ Office of the Inspector General and the Agency for Healthcare Research and Quality. Then, using hospital admission rates from 2013, they extrapolated that based on a total of 35,416,020 hospitalizations, 251,454 deaths stemmed from a medical error, which the researchers say now translates to 9.5 percent of all deaths each year in the U.S.

According to the CDC, in 2013, 611,105 people died of heart disease, 584,881 died of cancer and 149,205 died of chronic respiratory disease — the top three causes of death in the U.S. The newly calculated figure for medical errors puts this cause of death behind cancer but ahead of respiratory disease.

“Top-ranked causes of death as reported by the CDC inform our country’s research funding and public health priorities,” says Makary. “Right now, cancer and heart disease get a ton of attention, but since medical errors don’t appear on the list, the problem doesn’t get the funding and attention it deserves.”

The researchers caution that most of medical errors aren’t due to inherently bad doctors, and that reporting these errors shouldn’t be addressed by punishment or legal action. Rather, they say, most errors represent systemic problems, including poorly coordinated care, fragmented insurance networks, the absence or underuse of safety nets, and other protocols, in addition to unwarranted variation in physician practice patterns that lack accountability.

“Unwarranted variation is endemic in health care. Developing consensus protocols that streamline the delivery of medicine and reduce variability can improve quality and lower costs in health care. More research on preventing medical errors from occurring is needed to address the problem,” says Makary.

Michael Daniel of Johns Hopkins is a co-author on the study.

On the other hand, accidental gun deaths hover around 500 a year.

The number of overall gun deaths in 2015—accidental, homicides, and suicides—was approximately 36,000, two-thirds of which were suicides. So 250,000 malpractice deaths is nearly seven times higher than gun deaths, even when counting intentional gun deaths.

In 2014, gun control groups were seizing on firearm-related child deaths as a way to push gun control. But Breitbart News reported that more children were accidentally killed via fire and water than were killed by firearms.