It seems there are more “correlation and causation” effects from vaccines, especially with the much-touted ‘cervical cancer prevention’ vaccines known as Gardasil®, Gardasil 9® and Cervarix® – the Human Papillomavirus (HPV) vaccines manufactured by Merck & Company and GlaxoSmithKline, respectively! These vaccines are loaded with aluminum adjuvants.

Gardasil®
Each 0.5-mL dose of the vaccine contains approximately 225 mcg of aluminum (as Amorphous
Aluminum Hydroxyphosphate Sulfate adjuvant), 9.56 mg of sodium chloride, 0.78 mg of L-histidine,
50 mcg of polysorbate 80, 35 mcg of sodium borate, <7 mcg yeast protein/dose, and water for injection.
The product does not contain a preservative or antibiotics.

Gardasil 9®
Each 0.5-mL dose of the vaccine also contains approximately 500 mcg of aluminum (provided as
AAHS), 9.56 mg of sodium chloride, 0.78 mg of L-histidine, 50 mcg of polysorbate 80, 35 mcg of sodium
borate, <7 mcg yeast protein, and water for injection. The product does not contain a preservative or
antibiotics.

Note that under the Description, no amount in mcg or otherwise is listed for the aluminum content!

Genotoxicity The genotoxic potential of CERVARIX has not been investigated. (Pg. 15)

Carcinogenicity The carcinogenic potential of CERVARIX has not been investigated. (Pg. 16)

Even though the GlaxoSmithKline package insert for Cervarix® seemingly skirts stating the amount of aluminum in the GSK HPV vaccine, I was able to find the content of aluminum hydroxide on the European Union health documents website below and it is 0.5 milligrams!

According to the Abstract for the article by Lars Andersson,

The Centre for Cervical Cancer Prevention in Sweden has noted in its annual report a substantial increase in the incidence of invasive cervical cancer, especially during the two years 2014 and 2015.  [….]

The increase in the incidence of cervical cancer was shown to be most prominent among women 20–49 years of age while no apparent increase was observed among women above 50.

Lars Andersson is associated with the prestigious Karolinska Institute [1].

In the Introduction section of the Andersson article, he cites and translates “The Centre for Cervical Cancer Prevention (NKCx) in Sweden has noted in its annual report of 2017(1), which includes data up to 2016,” as follows:

The age-standardised incidence of invasive cervical cancer in Sweden has increased substantially in the last two years (20%) and there is a statistically significant increase for the entire period 2005–2015. The incidence in Sweden for 2014–2015 is 11.5 per 100,000 women. The increase in the last two years can be seen in all counties except Södermanland, Skåne, Jämtland and Västerbotten. Substantial and statistically significant increases are seen for Östergötland, Jönköping, Blekinge, Halland, Värmland, Örebro and Dalarna, with an average yearly increase of 7%–8%. Tendencies of substantial increases are also seen for Uppsala, Gotland, Västmanland and Västerbotten with yearly average increases of 4% or more.

The above information was gathered from the statistical database managed by the National Board of Health and Welfare in Sweden. 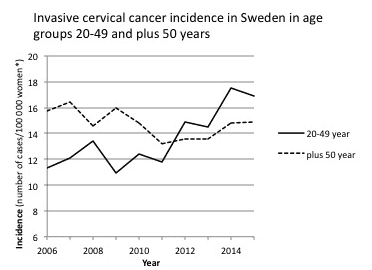 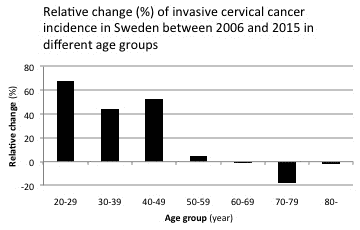 I encourage all readers, especially parents and young girls/women of HPV vaccination age groups, to read the comprehensive Discussion Mr. Andersson puts forth in that paper. 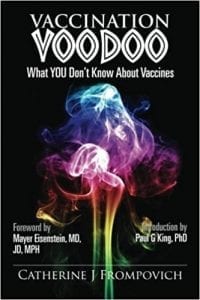 Catherine J Frompovich (website) is a retired natural nutritionist who earned advanced degrees in Nutrition and Holistic Health Sciences, Certification in Orthomolecular Theory and Practice plus Paralegal Studies. Her work has been published in national and airline magazines since the early 1980s. Catherine authored numerous books on health issues along with co-authoring papers and monographs with physicians, nurses, and holistic healthcare professionals. She has been a consumer healthcare researcher 35 years and counting.