Nine U.S. states halted the use of the swine flu vaccines after just three people died that year. All of them had heart disease, but back then, that did not matter. The vaccine were considered unsafe and pulled off the market in Alaska, Illinois, Louisiana, Maine, New Mexico, Texas, Vermont, Virginia and Wisconsin. Allegheny County, Pennsylvania (Pittsburgh) also halted the injections. The 1960s polio vaccines killed 11 children and paralyzed 200 more, but remained on the market as Polio was deemed more deadly than the vaccine.

“Polio is the iconic epidemic, its conquest one of medicine’s heroic dramas. The narrative is by now familiar: Random, inexplicable outbreaks paralyzed and killed thousands of infants and children and struck raw terror into 20th century parents, triggering a worldwide race to identify the virus and develop a vaccine. Success ushered in the triumphant era of mass vaccination. We were all saved by vaccines.”

This is the undying retort of everyone who questions the anti-vaccine stance.
I get it. No one wants polio to “come back”. Not even the anti-vaxxers. But, was it ever truly eradicated?

In the 50s, prior to the introduction of the polio vaccine, the majority of reported paralytic polio cases were documented as polio – even if they weren’t confirmed. This means that cases of aseptic (viral) meningitis or other enterovirus infections (typically coxsackie or echo viruses) which can cause transverse myelitis, were documented as polio. Cases of Guillain-Barre Syndrome (GBS), which is a known adverse reaction that occurs following vaccination (Pentacel insert, page 7) may have also been improperly reported as polio, since they have similar symptoms (demyelination). It’s even been discovered that Franklin D Roosevelt likely had GBS, not polio.

After the introduction of the polio vaccine, they began to test for and confirm suspected or reported cases of polio, thereby distinguishing between cases of polio and the other “polio-like” illnesses. By simply redefining the diagnostic criteria for what would be reported as “polio”, and no longer mislabeling polio-like illnesses as “polio”, this created an artificial drop in polio cases. The documentary “Vaccination: The Hidden Truth” (19:15-20:05) explains how this phenomenon also occurred in South America, showing that after the introduction of the polio vaccine, the reported or “notified” cases of polio actually increased, while the “confirmed” cases declined.

This is one major reason why “anti-vaxxers” take issue with the idea that the polio vaccine eradicated polio.

But, here’s another reason.

Less than 1% of all polio infections result in permanent paralysis. What about the rest?

Some cases of polio may result in temporary paralysis, or no paralysis at all. Symptoms of non-paralytic polio can be: fever, headache, sore throat, vomiting, fatigue, muscle aches/weakness, pain and stiffness in the back, neck or limbs, and – meningitis. Prior to the introduction of the polio vaccine, cases of temporary paralysis were documented as polio. Even cases where there was no paralysis, it was still “polio”. After the vaccine, only cases of permanent paralysis lasting longer than 60 days (page 9), were documented as polio. Again, by redefining the diagnostic criteria, this greatly contributed to the decline of documented cases of polio following the introduction of the vaccine. 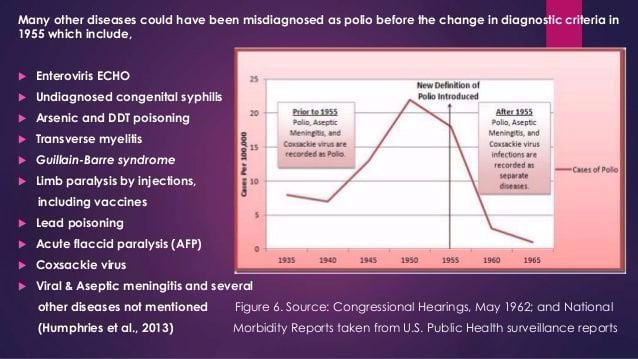 Under the new definition of polio, thousands of cases which would have previously been counted as polio would no longer be counted as polio. The change in the definition laid the groundwork for creating the impression that the Salk vaccine was effective.4

Prior to the introduction of the polio vaccine, a polio “epidemic” was defined as 20 cases per 100,000 population. After the vaccine, an outbreak was not labeled an epidemic until there were at least 35 cases per 100,000 population. As reported in the Chicago Tribune article, in 1960: “This change has resulted in a statistical – but not necessarily a real – drop in polio epidemics.” 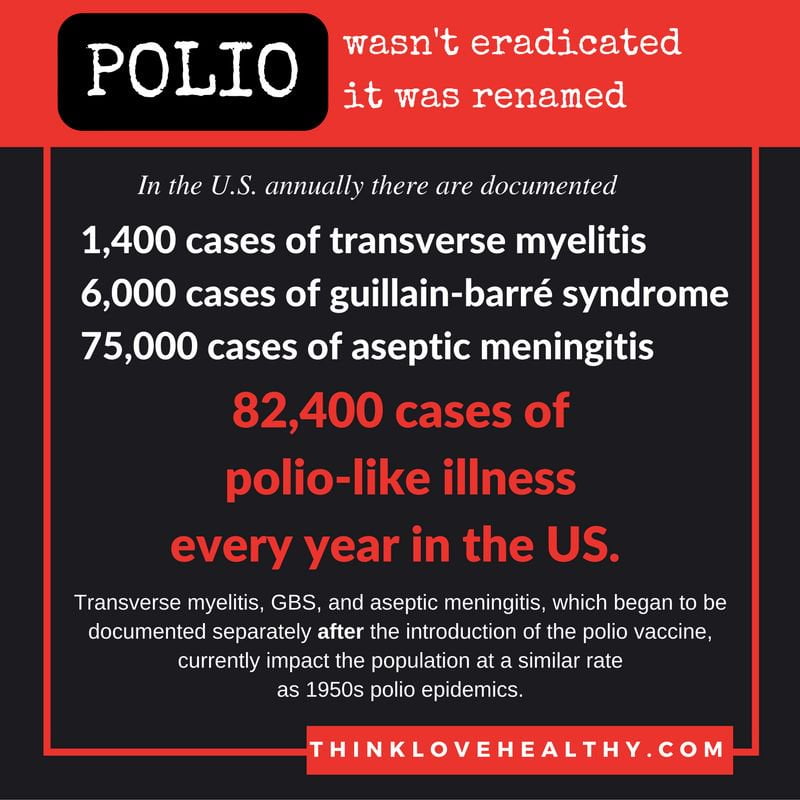 As it was noted above, transverse myelitis and GBS, both of which cause polio-like paralysis, are known adverse reactions to vaccination. Approximately 1,400 new cases of transverse myelitis and 3,000-6,000 new cases of GBS occur in the U.S. each year. There are more than 10,000 cases of aseptic meningitis each year, but this number may be as high as 75,000 due to lack of reporting. Aseptic meningitis has also been reported to occur following  vaccination (insert page 7, and in this study and many others). In contrast, at it’s peak incidence, there were over 52,000 cases of polio in 1952. Of those cases, 21,000 were associated with paralysis.

Let’s do some math.

Adjusted for population size (319 million), this affects 0.026% of the population.

One last note. In the 50s, smallpox and DPT (diphtheria, tetanus and pertussis) vaccines were in use. Not only have smallpox and DPT vaccines been found to cause transverse myelitis, but during that time, it was found that vaccinations and tonsillectomies could provoke polio infection during outbreaks or epidemics of polio. This was called “Provocation Polio“. The theory, is that deeply puncturing the muscle tissue via injection causes injury which makes the tissue susceptible to infection, which then allows enteroviruses to be driven deeper into the body where they bypass the gut and natural immune system responses, reach the central nervous system, and attack the spinal column. Tonsillectomies occur today, but were much more common in the 1950s, during polio epidemics.

I encourage you to fully read through the 1960 Chicago Tribune article on polio and the polio vaccine.

When it comes down to the facts, there’s nothing to claim. No one can truly claim that the polio vaccine eradicated polio in this country. Here’s what we do know: