On July 6, 1918, Allied troops readied themselves for a forgotten battle that turned the tide of World War I. Thousands of American servicemen marched through the night to position themselves for a surprise strike against the Germans.

A thunderstorm raged the third week of July 1918. Other than the occasional arcs of white-hot lightning, the night was so dark that the American Marines marched with each man holding one hand on the pack of the man in front of him to avoid getting lost. They hadn’t eaten in more than a day, and the men were bone-weary. Still, they were moving as quickly as possible on the slippery footing in the Retz Forest (France). Screened by the trees and the weather, they were rushing to get into position for a morning attack, hopefully before the Germans noticed what was happening.

Some men fell asleep while marching or while riding their horses. Along the way, they passed the grisly remains of previous battles: horses sliced into pieces and left to rot where they lay. Many were cut clean in half, and one, blown off the ground by artillery shells, dangled from a tree like a gruesome piñata. The sights and smells spooked the living horses, and the cavalrymen and artillerymen found it difficult to get their mounts to proceed through the forest. 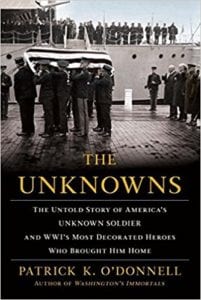 The story of that haunting night march and the deadly battle that followed is retold in my new best-selling book, The Unknowns: The Untold Story of America’s Unknown Soldier and WWI’s Most Decorated Heroes Who Brought Him Home. Recently released, The Unknowns follows eight American heroes who accomplished extraordinary feats in some of the

Go to Term Page
" >war’s most important battles. As a result of their bravery, these eight men were selected to serve as Body Bearers at the ceremony where the Unknown Soldier was laid to rest at Arlington Cemetery.

Some of those Body Bearers participated in the Battle of Soissons. One of them, Color Sergeant James W. Dell of the light artillery, was among the men who fired the first rounds of the battle. Hundreds of guns, including Dell’s 75, opened up before dawn, catching the Germans off guard. “We opened fire at 4:30 in the morning. It sounded as though thousands of guns were in action at one time, all firing at top speed. The ground shook with the violence of the firing.” Within minutes, hundreds of trees had toppled to the ground.

The Germans responded with deadly mustard gas. Infantrymen and Marines donned gas masks as they surged forward and began the laborious chore of breaching the huge mounds of barbed wire that screened the enemy positions, all while under fire from the deadly machine-gun nests.

Fighting their way out of the forest, the 49th Company of Marines, a band of brothers that The Unknowns follows through some of the toughest combat of the entire war, emerged into golden, rolling wheat fields. Here the eighteenth century met the twentieth century on the field of battle, infantrymen armed with bayonet-tipped rifles and cavalrymen armed with sabers and lances lunged forward, accompanied by rumbling tanks and thundering artillery, while airplanes dueled overhead.

The Germans had hidden machine-gun nests in the wheat, but they proved no match for the tanks. Heedless of the fire bouncing off their plating, the armored vehicles flattened the fields and located many of the nests. “Whole batteries were captured, and the guns were turned on the retreating Germans,” the operational report explained.

Continuing to advance, the 49th Marines found themselves fighting alongside Allied Senegalese troops near a steep ravine. “These [soldiers] from West Africa were enjoying themselves,” one Marine noted. “Their eyes rolled, and their splendid white teeth flashed in their heads. . . . They were deadly. Each platoon swept its front like a hunting pack, moving swiftly and surely together.”

The Germans lived in terror of being taken prisoner by the Africans, who had a reputation for committing atrocities. One American surgeon reported treating an African soldier who refused to let go of a bag until the man had fainted. Then the doctor “picked up the bag and looked in and found a German soldier’s head that had apparently been severed with a knife.”

By the afternoon of July 18, the Marines had advanced as far as the town of Vierzy, which they had been ordered to take. However, the Germans repulsed the initial attack. Colonel Hanson Ely, the indomitable commander of the 3rd Brigade who had been nicknamed “Steamroller” by his men, angrily asked the major in charge of the attack why he hadn’t yet accomplished his mission.

When the major replied that they had been held up, Ely, who spoke in a gruff manner with clenched teeth and rarely smiled, responded, “Held up, hell, you were supposed to take that town by four o’clock, and here it is six thirty and the sun is going down! Go get that—”

“But sir, I’ve sent for help from two companies. I’ve got to have some men.”

“Men? Men? Jesus! You want men? What’s the matter with all these men around you in the ditches here—are they Boy Scouts?” Ely acidly retorted.

“But these are runners, clerks, and orderlies and such as that. They’re only armed with pistols, and I’ve only forty, more or less. They can’t—”

In a silken purr, Ely responded, “They are Marines, aren’t they, major?”

“Aye, aye, sir,” the major replied, and then he and his men, with help from Ely’s 23rd Infantry Regiment, cleared the rest of Vierzy.

The Germans retreated to the northeast and consolidated behind their defenses. The Allies pursued with deadly consequences. Some Marine units experienced losses as high as 40 percent. An American Marine’s diary recorded the grotesque carnage that became so overwhelming it drove some of the men out of their minds.

“Overton was hit by a big piece of shell,” he wrote. “His heart was torn out. . . . A man near me was cut in two; others when hit would stand, it seemed an hour, then fall in a heap. . . In a shallow trench . . . I found three men blown to bits, another lost his legs, a fifth his head. At one end of the trench sat a crazy man who . . . with a shrill laugh, pointed and said over and over again, ‘Dead men, dead men.’ The man who had lost his eyes wanted me to hold his hand. Another with his back ripped open wanted his head patted.”

Pushing on despite their losses, the Allies shoved the Germans back to the Hindenburg Line. In one battle, they recaptured most of the ground the Germans had taken with their series of offensives in the spring of 1918, and the Americans had done much of the heavy lifting.

The tide of the war had shifted to favor the Allies. Soissons set the stage for the eventual armistice that would follow in just a few months’ time.

However, it was also for actions at Soissons that a young Gefreiter named Adolf Hitler received the German

Source Breitbart News: Patrick K. O’Donnell is a bestselling, critically acclaimed military historian and an expert on elite units. He is the author of eleven books. The Unknowns is his newest, and it is featured in Barnes & Noble stores. O’Donnell served as a combat historian in a Marine rifle platoon during the Battle of Fallujah and speaks often on espionage, special operations, and counterinsurgency. He has provided historical consulting for DreamWorks’ award-winning miniseries Band of Brothers and for documentaries produced by the BBC, the History Channel, and Discovery. PatrickkODonnell.com @combathistorian