An excerpt from ‘The American Hebrew Magazine’ dated 10 September 1920:

Czar Nicholas II abdicated in March 1917. Since Bolshevik leaders Vladimir Lenin and Leon Trotsky weren’t even in Russia then, how did they gain control of it by November 1917? Western analysts uncovered parts of this mystery, but much remained unknown due to the Soviet government’s stranglehold on its history – as Orwell said, “Who controls the present controls the past.” With glasnost, archives creaked open. Perhaps no one has collated the information better than Juri Lina, whose out-of-print Under the Sign of the Scorpion can be found online until his new edition is released this April.

The Rothschild-Illuminati axis, through their network of banksters and Freemasons, controlled the Bolshevik operation.

In 1992, the newspaper Literaturnaya Rossiya estimated that, including starvation and civil war, Soviet communism left 147 million dead. Even accepting the more moderate claim of Harvard University Press’s Black Book of Communism – that communism murdered “only” 100 million worldwide – what these numbers represent is beyond comprehension. Stalin reportedly said: “One death is a tragedy; a million is a statistic.”

Lenin and Trotsky repaid their masters. Lina writes: “In October 1918, Jewish bankers in Berlin received 47 cases of gold from Russia, containing 3125 kilos of gold.” The Grand Orient de France refurbished its Paris Lodge with money Lenin sent in 1919.  In New York, Kuhn, Loeb received, in the first half of 1921 alone, $102 million in Russian wealth.

Bolsheviks were predominantly Jewish – unsurprising given the long linkage of cabalistic Jews to Freemasonry and revolution. I state this objectively, without anti-Semitism. I am half-Jewish; my paternal grandparents emigrated from Russia in 1904.

From Hungary’s Bela Kun, to Germany’s Rosa Luxemburg, to America’s Rosenbergs (atomic spies), to Karl Marx himself, Jews were undeniably disproportionate among communists. This observation is not meant to stigmatize Jews. But why are communism’s victims forced to sit in the back of the holocaust bus? Why are we constantly reminded of Kristallnacht, but never the Bolsheviks’ destroying 60,000 churches and murdering over 300,000 priests?  Why was historian David Irving imprisoned for challenging the Shoah’s official version (“hate crime”), whereas New York Times correspondent Walter Duranty denied the Ukrainian Holocaust and received a Pulitzer Prize? Why are no Ukrainian Anne Franks honored in films? They are all God’s children.

Could Americans experience a modernized Red Terror? Though America would never have accepted outright communist revolution, it is now adopting measures accurately termed socialism. The Illuminati are employing a timeworn principle: To boil a frog, don’t toss him in boiling water – he’ll jump out. Instead, put him in lukewarm water and gradually raise the heat; the frog never realizes he’s been boiled. This slow warming is “Fabian socialism” (gradual communism).

This fulfills the famous revelation Ford Foundation President Rowan Gaither made to Congressional investigator Norman Dodd: that Establishment foundations planned “to alter life in the United States, that it can be comfortably merged with the Soviet Union.”

However, this had a corollary. East-West merger required communist states to temporarily abandon hard-line communism and adopt moderate socialism with democratic trappings. I consider this the likely purpose of Gorbachev introducing glasnost in 1989. The ending of Orwell’s Animal Farm, where the pigs and farmers became indistinguishable, is being played out.

Communist genocide was not confined to Russia. Under Mao Tse-tung, China’s death toll rose above 60 million; Pol Pot eliminated nearly one-third of Cambodians in the 1970s. Yet suddenly, in the 1990s, worldwide communism put on a smiley.

It made no sense; totalitarians do not voluntarily yield power. 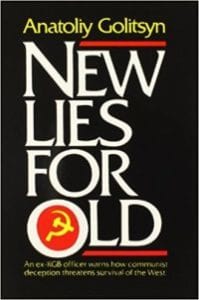 Glasnost’s meaning was disclosed by Anatoly Golitsyn, highest-ranking KGB officer to defect during the Cold War (Alfred Hitchcock dramatized his escape in Topaz). In Golitsyn’s 1984 book New Lies for Old, he revealed the groundbreaking strategy the KGB disclosed to him. His book predicted: Yuri Andropov’s replacement by “a younger leader with a more liberal image” [Gorbachev]; democratic liberalization throughout the Eastern bloc; the Berlin Wall’s fall and reunion of East and West Germany. Golitsyn’s book made 148 predictions; by 1993, 139 were fulfilled. Though a political prophet, the media ignored him.

Golitsyn warned the changes were a TEMPORARY DECEPTION. In the end, he wrote, “all the totalitarian features familiar from the early stages of the Soviet revolution and the postwar Stalinist years in Eastern Europe might be expected to reappear.”

Is America on the precipice of another “Red Terror”?

None of this should surprise us: the Rothschild-Illuminist-Masonic network that ruled in 1917 still rules in 2014.