On October 20, 1774, the First Continental Congress creates the Continental Association, which calls for a complete ban on all trade between America and Great Britain of all goods, wares or merchandise.

The creation of the association was in response to the Coercive Acts—or “Intolerable Acts” as they were known to the colonists–which were established by the British government to restore order in Massachusetts following the Boston Tea Party.

The Intolerable Acts were a set of four acts: The first was the Boston Port Act, which closed the port of Boston to all colonists until damages from the Boston Tea Party were paid. The second, the Massachusetts Government Act, gave the British government total control of town meetings, taking all decisions out of the hands of the colonists. The third, the Administration of Justice Act, made British officials immune to criminal prosecution in America and the fourth, the Quartering Act, required colonists to house and quarter British troops on demand, including in private homes as a last resort.

Outraged by the new laws mandated by the British Parliament, the Continental Association hoped that cutting off all trade with Great Britain would cause enough economic hardship there that the Intolerable Acts would be repealed. It was one of the first acts of Congress behind which every colony firmly stood.

To obtain redress of these grievances, which threaten destruction to the lives, liberty, and property of his majesty’s subjects, in North America, we are of opinion, that a non-importation, non-consumption, and non-exportation agreement, faithfully adhered to, will prove the most speedy, effectual, and peaceable measure: and, therefore, we do, for ourselves, and the inhabitants of the several colonies, whom we represent, firmly agree and associate, under the sacred ties of virtue, honour and love of our country, as follows:

And we do solemnly bind ourselves and our constituents, under the ties aforesaid, to adhere to this association, until such parts of the several acts of parliament passed since the close of the last war, as impose or continue duties on tea, wine, molasses, syrups, paneles, coffee, sugar, pimento, indigo, foreign paper, glass, and painters’ colours, imported into America, and extend the powers of the admiralty courts beyond their ancient limits, deprive the American subject of trial by jury, authorize the judge’s certificate to indemnify the prosecutor from damages, that he might otherwise be liable to from a trial by his peers, require oppressive security from a claimant of ships or goods seized, before he shall be allowed to defend his property, are repealed.–And until that part of the act of the 12 G. 3. ch. 24, entitled “An act for the better securing his majesty’s dock-yards, magazines, ships, ammunition, and stores,” by which any persons charged with committing any of the offences therein described, in America, may be tried in any shire or county within the realm, is repealed–and until the four acts, passed the last session of parliament, viz. that for stopping the port and blocking up the harbour of Boston–that for altering the charter and government of the Massachusetts-Bay–and that which is entitled “An act for the better administration of justice, &c.”–and that “for extending the limits of Quebec, &c.” are repealed. And we recommend it to the provincial conventions, and to the committees in the respective colonies, to establish such farther regulations as they may think proper, for carrying into execution this association.

The foregoing association being determined upon by the Congress, was ordered to be subscribed by the several members thereof; and thereupon, we have hereunto set our respective names accordingly. 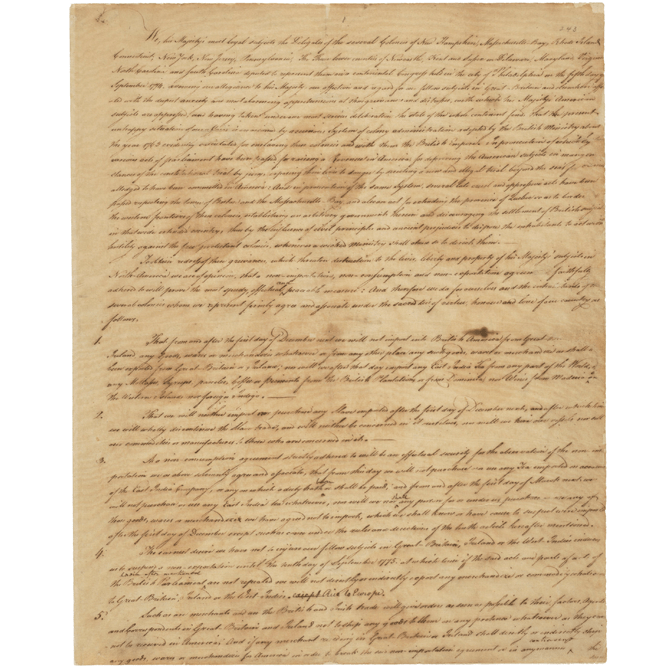 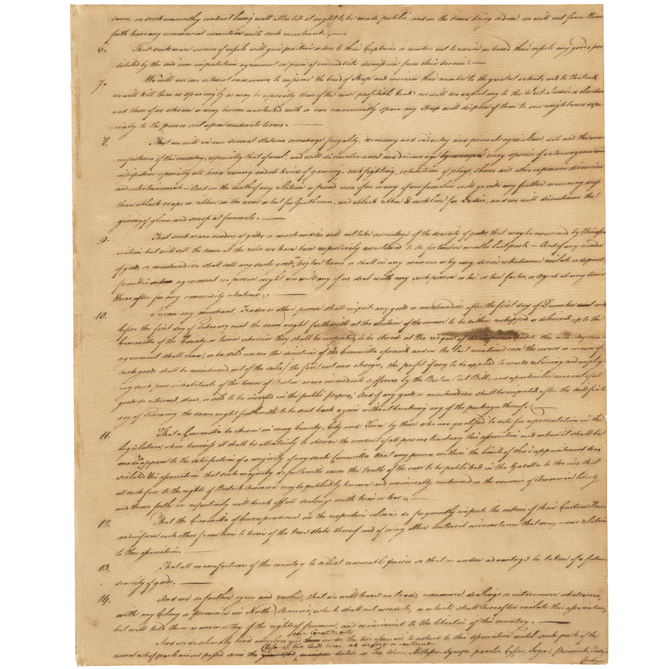 These 53 delegates signed the Association in Congress. Many local signings also took place.[7]