By the mid 1700’s Britain was at its height of power, but was also heavily in debt. Since the creation of the Bank of England, they had suffered four costly wars and the total debt now stood at £140,000,000, (which in those days was a lot of money). In order to make their interest payments to the bank, the British government set about a program to try to raise revenues from their American colonies, largely through an extensive program of taxation.

There was a shortage of material for minting coins in the colonies, so they began to print their own paper money, which they called Colonial Script. This provided a very successful means of exchange and also gave the colonies a sense of identity. Colonial Script was money provided to help the exchange of goods. It was debt free paper money not backed by gold or silver.

During a visit to Britain in 1763, The Bank of England asked Benjamin Franklin how he would account for the new found prosperity in the colonies. Franklin replied.

That is simple. In the colonies we issue our own money. It is called Colonial Script. We issue it in proper proportion to the demands of trade and industry to make the products pass easily from the producers to the consumers.

In this manner, creating for ourselves our own paper money, we control its purchasing power, and we have no interest to pay to no one.

America had learned that the people’s confidence in the currency was all they needed, and they could be free of borrowing debts. That would mean being free of the Bank of England. In Response the world’s most powerful independent bank used its influence on the British parliament to press for the passing of the Currency Act of 1764. This act made it illegal for the colonies to print their own money, and forced them to pay all future taxes to Britain in silver or gold.

Here is what Franklin said after that.

In one year, the conditions were so reversed that the era of prosperity ended, and a depression set in, to such an extent that the streets of the Colonies were filled with unemployed.

The colonies would gladly have borne the little tax on tea and other matters had it not been that England took away from the colonies their money, which created unemployment and dissatisfaction. The inability of the colonists to get power to issue their own money permanently out of the hands of George III and the international bankers was the PRIME reason for the Revolutionary War.

By the time the war began on 19th April 1775 much of the gold and silver had been taken by British taxation. They were left with no other choice but to print money to finance the war. What is interesting here is that Colonial Script was actually working so well, it became a threat to the established economic system of the time.

The idea of issuing money as Franklin put it “in proper proportion to the demands of trade and industry” and not charging any interest, was not causing any problems or inflation. This unfortunately was alien to the Bank of England which only issued money for the sake of making a profit for its shareholder’s.

Following is the text of the Currency Act of 1764. This was just one of a series of acts which led to greater discontent amongst the colonists. Eventually, this discontent would lead to the American Revolution. 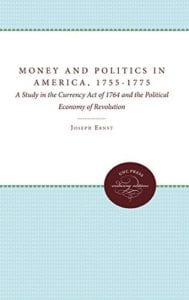 Money and Politics in America, 1755-1775: A Study in the Currency Act of 1764 and the Political Economy of Revolution

Although it is obvious that politics, money, and economic conditions were closely interrelated in the twenty years before the Revolution, this is the first account to bring together these strands of early American experience. Ernst also provides and analytical case study of the impact on America of British monetary policy during a period of dramatic shifts in the Atlantic economy and suggests that earlier studies are questionable because of theoretical misconceptions concerning the importance of visible” money.”

Originally published in 1973. A UNC Press Enduring Edition — UNC Press Enduring Editions use the latest in digital technology to make available again books from our distinguished backlist that were previously out of print. These editions are published unaltered from the original, and are presented in affordable paperback formats, bringing readers both historical and cultural value.