Sometimes called the Ems Telegram, was published on 13 July 1870 and incited the Second French Empire to start the Franco-Prussian War and to declare war on the Kingdom of Prussia on 19 July 1870. The actual dispatch was an internal message from Prussian King Wilhelm I‘s vacationing site to Otto von Bismarck in Berlin, reporting demands made by the French ambassador. Bismarck, the chancellor (head of government) of the North German Confederation, released a statement to the press that stirred up emotions in France and Germany.

The name referred to Bad Ems, a resort spa east of Koblenz on the Lahn river, then in Hesse-Nassau, a new possession of Prussia.

On 13 July 1870, King Wilhelm I of Prussia, on his morning stroll in the Kurpark in Ems, was stopped by Count Vincent Benedetti, the French ambassador to Prussia since 1864. Benedetti had been instructed by his superior, Foreign Minister Agenor, duc de Gramont, to present the French demand that the king should guarantee that he would never again permit the candidacy of a Hohenzollern prince to the Spanish throne. The meeting was informal and took place on the promenade of the Kursaal with the king’s entourage at a discreet distance. Politely and in a friendly manner, “with the courtesy that never failed him”, the king refused to bind himself to any course of action into the indefinite future. After their exchange, “the two departed coolly.”1

The evening of his encounter with Benedetti, Wilhelm sent a telegram to Bismarck through Heinrich Abeken (a Prussian politician and close confidant of the king and Bismarck) to report the new demands made by the French. Bismarck seized the opportunity to ‘wave a red rag in front of the Gallic bull’ and to push France into making a mistake that would have dire consequences. He edited the telegram, taking liberties to make it more provocative, and published it the German newspapers as the ‘Ems Dispatch’. His alterations made it seem as if the Prussian king and the French ambassador had insulted one another. His last masterstroke was his use of a mistranslation to stir up further animosity: the dispatch specified that the king would no longer receive the ambassador, and instead sent an subaltern ‘adjutant’ to inform him of Prince Leopold’s decision to renounce his candidacy. 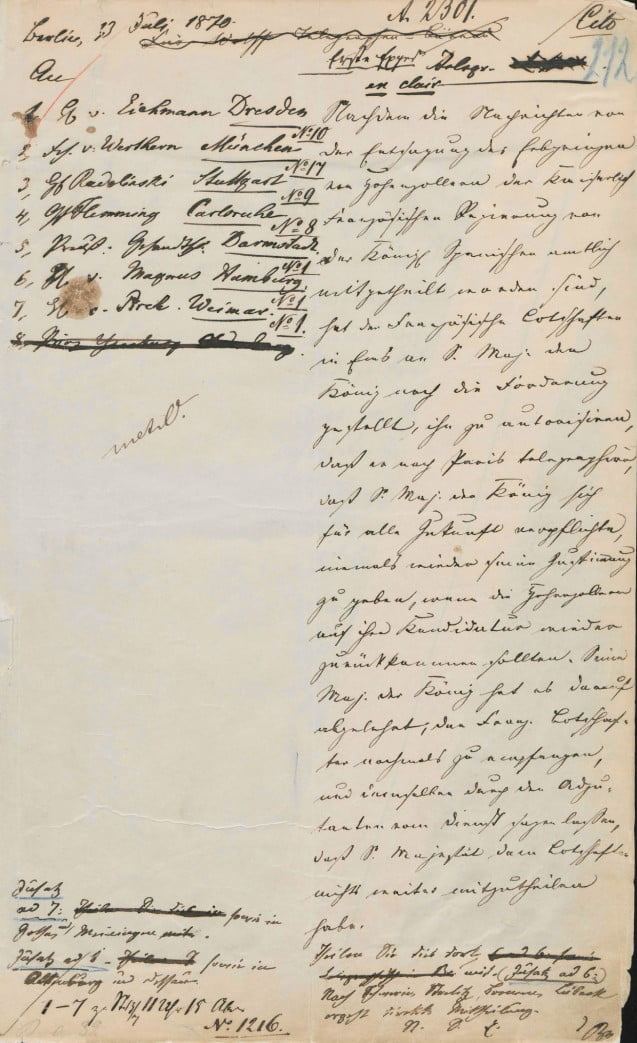 Bismarck was deliberate in his use of the word ‘adjutant’, which in the German army corresponded to a staff officer, but translated into French as an aide de camp [ADC], which is a non-commissioned rank. French pride was damaged to its very core, resulting in numerous nationalist publications and demonstrations. Nationalism also reared its head in Prussia, where the population responded in kind to the increasingly bellicose attitude of French public opinion. The situation deteriorated rapidly: the reservists were called up, and the Prussian embassy was attacked by protestors. The French Council of Ministers was hesitant to go any further, and even though King Wilhelm had renounced any aspirations to control the Spanish throne, neither the French nor Prussian press ceased with their pro-war publications, and the two states continued their march to war: a war that now seemed inevitable.

Despite the fierce opposition of certain deputies (led by Adolphe Thiers), who argued that the French army was not ready to enter into direct conflict with Prussia and its allies, the mobilisation was signed on 14 July 1870. The next day, a majority of deputies voted for war appropriations. On 19 July, they declared war. When the news broke out, the people of Paris spontaneously congregated in front of the Tuileries Palace. According to the French Minister of War, Edmond Le Bœuf, the French army was ‘prête, archi-prête‘ [loaded, locked and loaded] for war. Meanwhile the armies of the Prussians and their allies, in numbers twice as strong as the French, marched along the left bank of the Rhine, ready to bury the Second French Empire in a tomb on the eastern plains.2