Toward the end of 1775, Muhlenberg was authorized to raise and command as its colonel the 8th Virginia Regiment of the Continental Army. After George Washington personally asked him to accept this task, he agreed. However, his brother Fredrick Augustus Muhlenberg, who was also a minister, did not approve of him going into the army until the British burned down his own church in front of him. Then he joined the military himself.

According to a biography written by his great nephew in the mid-19th century, on January 21, 1776 in the Lutheran church in Woodstock, Virginia, Reverend Muhlenberg took his sermon text from the third chapter Ecclesiastes, which starts with “To every thing there is a season…”; after reading the eighth verse, “a time of war, and a time of peace,” he declared, “And this is the time of war,” removing his clerical robe to reveal his Colonel’s uniform. Outside the church door the drums began to roll as men turned to kiss their wives and then walked down the aisle to enlist, and within half an hour, 162 men were enrolled. The next day he led out 300 men from the county to form the nucleus of the 8th Virginia Regiment.

Muhlenberg’s unit was first posted to the South, to defend the coast of South Carolina and Georgia. In early 1777, the Eighth Regiment was sent north to join Washington’s main army. Muhlenberg was made a brigadier general of the Virginia Line and commanded that Brigade in Nathanael Greene’s division at Valley Forge. Muhlenberg saw service in the Battles of Brandywine, Germantown, and Monmouth. After Monmouth, most of the Virginia Line was sent to the far south, while General Muhlenberg was assigned to head up the defense of Virginia using mainly militia units.

At the Battle of Yorktown, he commanded the first brigade in Lafayette’s Light Division.[6] His brigade was part of the Corps of Light Infantry, consisting of the light infantry companies of the line regiments of Massachusetts (ten companies), Connecticut (five companies), New Hampshire (five companies), and Rhode Island and New Jersey (one each). They held the right flank and manned the two trenches built to move American cannons closer to Cornwallis’ defenses. The battalion commanded by French Lieutenant Colonel Jean-Joseph Sourbader de Gimat led the night bayonet attack that stormed Redoubt No. 10 on October 14, 1781.

At the end of the war (1783), he was brevetted to major general and settled in Montgomery County, Pennsylvania. 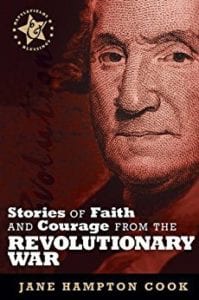 The book features 365 devotionals, one for each day of the year. • Each devotional features a 400-450-word story, a relevant scripture, and an application-oriented sentence prayer. • Each week highlights five stories that chronicle the Revolutionary War, followed by two weekend features called Weekend Reflection and Sabbath Rest. Weekend Reflection takes a modern-day twist on a topic, such as contentment and life purpose, presented in the preceding stories. Sabbath Rest highlights a sermon from the Revolutionary era. These 52 meaty messages show how scripture is as alive today as it was during America’s founding. These sermons also reveal the spiritual struggle facing the patriots as they decided to pursue independence, take up arms, and overthrow their government. • The devotionals come alive through the viewpoints of the Revolution’s key players, such as George Washington, King George III, Samuel Adams, John Adams, Thomas Jefferson, Abigail Adams, Martha Washington, Nathanael Greene, Henry Knox, and Benjamin Franklin. Excerpts from their original manuscripts, letters, and speeches give the book authenticity and accuracy. Unlike many books with historical subjects, this devotional incorporates faith as an important element in the decisions and emotions of these heroes and heroines. It will also show the life purpose of the patriots. • The themes presented in the book transcend generations, making the book relevant to modern day readers who also struggle with topics such as loneliness, contentment, purpose, fear, safety, God’s will, jealousy, rivalry, cooperation, and disappointment. • Because the stories chronicle America’s Revolutionary War and cover more than two decades, the book does not correspond to seasons and holidays. As a result, readers may begin the book any time during the year. The stories may be so captivating for some readers that they may read the book from “cover to cover.” • As readers consider the meaning of the American Revolution, they may also experience a revolution in their own hearts, one devotional at a time.