On June 24, 1717, the four freemasonic lodges in London were united into a Grand Lodge (sometimes called the Grand Mother Lodge) by three members who met at the Apple Tree Tavern, thus beginning the era of modern Freemasonry. Rather than being a guild of stone masons and builders, they altered their philosophy and became a pseudo-religion who “tried to cooperate with the Church so as to be able to work from the inside, rationalize the doctrine of Jesus and empty it gradually of its mystical content. Freemasonry hoped to become a friendly and legal heir to Christianity. They considered logic and the rules of scientific thinking as being the only absolute and permanent element of the human mind.” By 1725, the movement had spread to France.

The members of the Grand Lodge of England brought their fraternity to America. In 1730, Daniel Core was appointed Provincial Grand Master of New York, New Jersey and Pennsylvania, after the first lodge was established in Philadelphia. A lodge was established in Boston in 1733. By the time of the American Revolution, there were 100 Masonic lodges. The Masons were firmly entrenched in the eastern colonies, but since 95% of the population identified themselves as Christians, they had to modify their philosophies to include Christian teachings. The Grand Lodge of the United States was established in 1777, which officially cut all ties to their British counterparts. 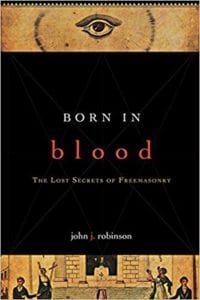 Its mysterious symbols and rituals had been used in secret for centuries before Freemasonry revealed itself in London in 1717. Once known, Freemasonry spread throughout the world and attracted kings, emperors, and statesmen to take its sacred oaths. It also attracted great revolutionaries such as George Washington and Sam Houston in America, Juarez in Mexico, Garibaldi in Italy, and Bolivar in South America. It was outlawed over the centuries by Hitler, Mussolini, and the Ayatollah Khomeini. But where had this powerful organization come from? What was it doing in those secret centuries before it rose from underground more than 270 years ago? And why was Freemasonry attacked with such intense hatred by the Roman Catholic church?

This amazing detective story answers those questions and proves that the Knights Templar in Britain, fleeing arrest and torture by pope and king, formed a secret society of mutual protection that came to be called Freemasonry. Based on years of meticulous research, this book solves the last remaining mysteries of the Masons―their secret words, symbols, and allegories whose true meanings had been lost in antiquity. With a richly drawn background of the bloody battles, the opportunistic kings and scheming popes, the tortures and religious persecution throughout the Middle Ages, it is an important book that may require that we take a new look at the history of events leading to the Protestant Reformation.