The Boston based “The Youth’s Companion” magazine published a few words for students to repeat on Columbus Day that year. Written by Francis Bellamy, the circulation manager and native of Rome, New York, and reprinted on thousands of leaflets, was sent out to public schools across the country. On October 12, 1892, the quadricentennial of Columbus’ arrival, more than 12 million children recited the Pledge of Allegiance, thus beginning a required school-day ritual.

At the first National Flag Conference in Washington D.C., on June 14, 1923, a change was made. For clarity, the words “the Flag of the United States” replaced “my flag”. In the following years various other changes were suggested but were never formally adopted.

In June of 1954 an amendment was made to add the words “under God”. Then-President Dwight D. Eisenhower said “In this way we are reaffirming the transcendence of religious faith in America’s heritage and future; in this way we shall constantly strengthen those spiritual weapons which forever will be our country’s most powerful resource in peace and 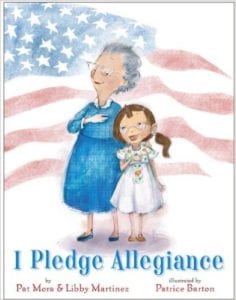 Libby’s great aunt, Lobo, is from Mexico, but the United States has been her home for many years, and she wants to become a U.S. citizen. At the end of the week, Lobo will say the Pledge of Allegiance at a special ceremony. Libby is also learning the Pledge this week, at school—at the end of the week, she will stand up in front of everyone and lead the class in the Pledge. Libby and Lobo practice together—asking questions and sharing stories and memories—until they both stand tall and proud, with their hands over their hearts. 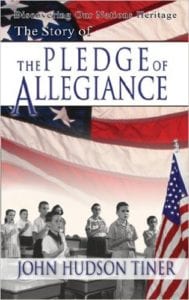 When American put their hands over their hearts to recite the Pledge of Allegiance, we know why it’s done. Yet how many of us know the story behind the Pledge? How did it come to be?

In this wonderful book, John Hudson Tiner provides the interesting detail behind the patriotic words, Learn facts about the various stages that culminated in the Pledge of Allegiance we say today. It has changed!

Read the stirring accounts of good men and women who boldly proclaimed that God is the source of this country’s many blessings. 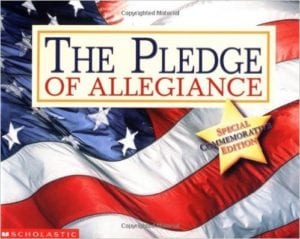 The text of the Pledge of Allegiance is illustrated with stunning photographs of American landscapes, monuments, and flags. The meaning of the pledge, its history, and information about the flag are included.