The British became concerned that Massachusetts towns had been withdrawing their gunpowder from the powder houses, so before dawn on September 1, 1774, 260 Redcoats acting on General Gage‘s order sailed up the Mystic River and seized hundreds of barrels of powder from the Charlestown powder house (next to the present site of Tufts University, in what is now Somerville). The only powder that was left to take belonged to the colonial government, so Gage was within his legal rights to seize it. But the seizure still incensed the public. The ―Powder Alarm, as it became known, was a serious provocation. By the end of the day on September 1, 20,000 militiamen had mobilized and started marching toward Boston.

In Connecticut and western Massachusetts, rumors quickly spread that the Powder Alarm actually involved fighting in the streets of Boston. More accurate reports reached the militia companies before those militia reached Boston, and so the war did not begin in September. The militia message, though, was unmistakable: if the British used violence to seize arms or powder, the Americans would treat that seizure as an act of war, and the militia would fight. And that is exactly what happened several months later, on April 19, 1775. 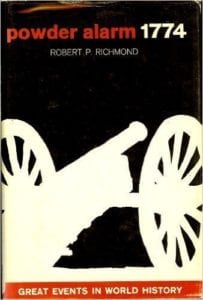