In an effort to raise funds to pay off debts and defend the vast new American territories won from the French in the Seven Years’ War (1756-1763), the British government passes the Stamp Act on this day in 1765. The legislation levied a direct tax on all materials printed for commercial and legal use in the colonies, from newspapers and pamphlets to playing cards and dice.

Though the Stamp Act employed a strategy that was a common fundraising vehicle in England, it stirred a storm of protest in the colonies. The colonists had recently been hit with three major taxes: the Sugar Act (1764), which levied new duties on imports of textiles, wines, coffee and sugar; the Currency Act (1764), which caused a major decline in the value of the paper money used by colonists; and the Quartering Act (1765), which required colonists to provide food and lodging to British troops. 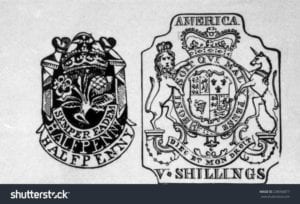 With the passing of the Stamp Act, the colonists’ grumbling finally became an articulated response to what they saw as the mother country’s attempt to undermine their economic strength and independence. They raised the issue of taxation without representation, and formed societies throughout the colonies to rally against the British government and nobles who sought to exploit the colonies as a source of revenue and raw materials. By October of that year, nine of the 13 colonies sent representatives to the Stamp Act Congress, at which the colonists drafted the “Declaration of Rights and Grievances,” a document that railed against the autocratic policies of the mercantilist British empire.

The British decided that they needed more control over the colonies, and more importantly, they needed more money from the colonies. The Crown was loaded with debt from the French and Indian War. Why shouldn’t the Americans — “children planted by our care, nourished by our indulgence,” as Charles Townshend of the House of Commons put it — pay off England’s debt?

In this speech, Barre referred to the colonists as “sons of liberty.” In the following months and years, as we know, the Sons of Liberty became increasingly resentful of English interference. And as the tides of American public opinion moved closer and closer to rebellion, Franklin’s disjointed snake continued to be used as symbol of American unity, and American independence.

Realizing that it actually cost more to enforce the Stamp Act in the protesting colonies than it did to abolish it, the British government repealed the tax the following year. The fracas over the Stamp Act, though, helped plant seeds for a far larger movement against the British government and the eventual battle for independence. Most important of these was the formation of the Sons of Liberty–a group of tradesmen who led anti-British protests in Boston and other seaboard cities–and other groups of wealthy landowners who came together from the across the colonies. Well after the Stamp Act was repealed, these societies continued to meet in opposition to what they saw as the abusive policies of the British empire. Out of their meetings, a growing nationalism emerged that would culminate in the fighting of the American Revolution only a decade later. 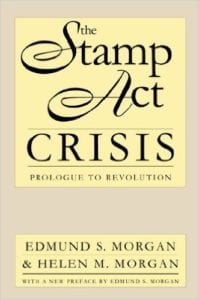 ‘Impressive! . . . The authors have given us a searching account of the crisis and provided some memorable portraits of officials in America impaled on the dilemma of having to enforce a measure which they themselves opposed.’–New York Times

‘A brilliant contribution to the colonial field. Combining great industry, astute scholarship, and a vivid style, the authors have sought ‘to recreate two years of American history.’ They have succeeded admirably.’–William and Mary Quarterly

‘Required reading for anyone interested in those eventful years preceding the American Revolution.’–Political Science Quarterly

The Stamp Act, the first direct tax on the American colonies, provoked an immediate and violent response. The Stamp Act Crisis, originally published by UNC Press in 1953, identifies the issues that caused the confrontation and explores the ways in which the conflict was a prelude to the American Revolution.

Benjamin Franklin Explains the Stamp Act Protests to Parliament, 1766 brings together a unique collection of primary source documents, organized and arranged as a dialogue, to examine the issues surrounding the Stamp Act. The selections–at the center of which is Benjamin Franklin’s examination in Parliament on February 13, 1766–are meant to be read as a continuous dialogue among leading colonists in America and politicians in England. While the individual documents were separated in time and space, here they are reconstituted as part of a consistent whole–a trans-Atlantic conversation about the nature of the empire, the rights of the colonists, and the powers of Parliament at a critical moment in American and British history. Some liberty has been taken in their editing in order to emphasize this conversational quality. A chronology preceding the documents indicates the sequence of their production, and a bibliographical essay at the end of the documents directs students to useful secondary sources. 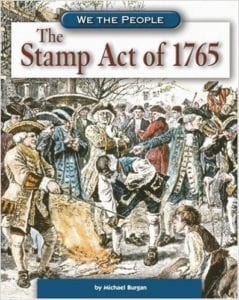 Formerly an editor at the educational publisher ‘Weekly Reader’, Michael Burgan has been a freelance writer for 17 years. He has written more than 250 books for children and young adults, specializing in U.S. history, geography, and biographies of world leaders. He has also written fiction and adapted classic novels. Burgan has won several awards for his writing, and his plays for adult audiences have been staged across the United States. He graduated from the University of Connecticut with a BA in history. He currently resides in Santa Fe, New Mexico with his cat Callie.