Officially known as the

Go to Term Page
" >Asia Minor Agreement, the Sykes-Picot Agreement was a secret 1916 agreement between the United Kingdom and France, to which the Russian Empire assented. The agreement defined their mutually agreed spoils of
Go to Term Page
" >war and control in Southwestern Asia. In 1919, the British and French implemented the 1916 agreement and divided the Arab world into nation states. The Sykes-Picot Treaty divided the Ottoman Empire into Turkey, Syria, Lebanon, Jordan, Palestine, Israel, As Iran’s economy teeters on the brink of collapse under the tough sanctions regime imposed by the Trump administration, the Islamic Republic’s authoritarian leadership has spent its limited cash reserves to bolster terror groups such as Hezbollah and Hamas, as well as militant terrorists in Syria, Iraq, and Yemen. Iran has spent more than $16 billion during the past several years to fund militant terrorists across the Middle East, cash that was repatriated to the Islamic Republic under(...)
Go to Term Page
" >Iran, and Iraq and assigned those countries to the winners of WWI, except for the United States (forbidden by the US Constitution). This set the “stage” for Middle Eastern chaos which was the imperialistic parceling out of the spoils of war and the rich oil resources each country possessed.

There was no consideration for the people who lived in those countries, their well-being, or a just consideration for the resources that the countries themselves should benefit from, instead of the conquering nations who claimed everything of value for themselves. These arbitrary and greedy decisions have led to a continuing series of “oil wars.” They also allowed Edwin Pauley to divide the oil resources between his friends who were warlord bankers and oil barons, assuring that Pauley himself got his profits.

It was the negligence of Pauley’s mentor, Charles Dawes, that allowed the tenants of the secret Sykes-Picot Treaty (1916) and the Brest-Litovsk Treaty (1918) to go unchallenged because Woodrow Wilson could not get the Treaty of Versailles, the Fourteen Points, or the League of Nations ratified by the Versailles Peace Talks or the U. S. Congress.

Pauley learned from Charles Dawes how to starve and control a defeated nation and fleece its assets. He learned from his close friend Allen Dulles, who started the OSS (Office of Special Services) which became the CIA (Central Intelligence Agency), how to confiscate the spoils of war and turn them into CIA fronts that launder confiscated gold, currencies, assets, and oil into the open market. Edwin Pauley made sure that the CIA had control of the U.S. Treasury’s Exchange Stabilization Fund so that it could control the laundered spoils and ensure that currency wars would be controlled by the CIA.

The negotiations leading to the agreement occurred between November 1915 and March 1916  and it was signed 16 May 1916. The deal, exposed to the public in Izvestia and Pravda on 23 November 1917 and in the British Guardian on November 26, 1917, is still mentioned when considering the region and its present-day conflicts. 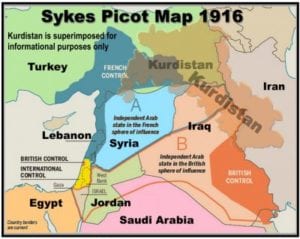 The agreement allocated to Britain control of areas roughly comprising the coastal strip between the Mediterranean Sea and the River Jordan, Jordan, southern Iraq, and an additional small area that included the ports of Haifa and Acre, to allow access to the Mediterranean. France got control of southeastern Turkey, northern Iraq, Syria and Lebanon. Russia was to get Istanbul, the Turkish Straits and Armenia. The controlling powers were left free to determine state boundaries within their areas. Further negotiation was expected to determine international administration in the “brown area” (an area including Jerusalem, similar to and smaller than Mandate Palestine), the form of which was to be decided upon after consultation with Russia, and subsequently in consultation with the other Allies, and the representatives of Hussein bin Ali, Sharif of Mecca.

The agreement effectively divided the Ottoman Arab provinces outside the Arabian peninsula into areas of British and French control and influence. In the Levant, it was initially used directly as the basis for the 1918 Anglo–French Modus Vivendi which agreed a framework for the Occupied Enemy Territory Administration. More broadly it was to lead, indirectly, to the subsequent partitioning of the Ottoman Empire following Ottoman defeat in 1918.

The Acre-Haifa zone was intended to be a British enclave in the North to enable access to the Mediterranean. The British later gained control of the brown zone and other territory in 1920 and ruled it as Mandatory Palestine from 1923 until 1948. They also ruled Mandatory Iraq from 1920 until 1932, while the French Mandate for Syria and the Lebanon lasted from 1923 to 1946. The terms were negotiated by British diplomat Mark Sykes and a French counterpart, François Georges-Picot. The Tsarist government was a minor party to the Sykes–Picot agreement, and when, following the Russian Revolution, the Bolsheviks published the agreement on 23 November 1917, “the British were embarrassed, the Arabs dismayed and the Turks delighted”.

The agreement is seen by many as a turning point in Western and Arab relations. It negated the UK’s promises to Arabs made for a national Arab homeland in the area of Greater Syria, in exchange for supporting the British against the Ottoman Empire.