The names of some of the largest GOP critics of President Donald Trump are surfacing in the investigation of a politician indicted this week on charges of fraud, human smuggling, selling children, forgery, conspiracy and ripping off the Arizona Health Care Cost Containment System.

Maricopa County Assessor Paul Petersen has been indicted in Arizona, Utah and Arkansas on state and federal charges that he is running an illegal adoption ring.

In all, he’s facing 62 criminal charges involving dozens of pregnant woman brought in from the Marshall Islands to supply babies to Petersen’s clients and millions to his bank account.

“Make no mistake, this case is the purest form of human trafficking,” the U.S. Attorney for western Arkansas, Duane “Dak” Kees, said Wednesday at a press conference in Springdale Ark. where he announced the federal indictments.

But what IS NOT public, until now, is Petersen’s curious association with GOP critics of President Trump, including former US Sen. Jeff Flake, late Sen. John McCain, and Sen. Mitt Romney among others. Petersen also campaigned for and is friends with Arizona Gov. Goug Ducey and other politicians, according to records and sources.

Petersen’s reference in 2013 to being invited on a Marshall Island trip WITH Flake is something that promises to peak the interest of state and federal investigators.

“Any investigator worth their salt would want to know what else Jeff Flake was doing on these trips to the Marshall Islands,” said Thomas Paine of True Pundit who worked for many federal agencies investigating fraud and corruption. “I would want to interview Flake just to get a feel for his relationship with Petersen and information on these trips.

“Is this merely a strange coincidence? You rule out coincidences as part of a proper investigation but the emphasis here is in on the word proper.”

Petersen has bragged that his Mesa-based family has roots in Arizona for generations. Flake too hails from Mesa. 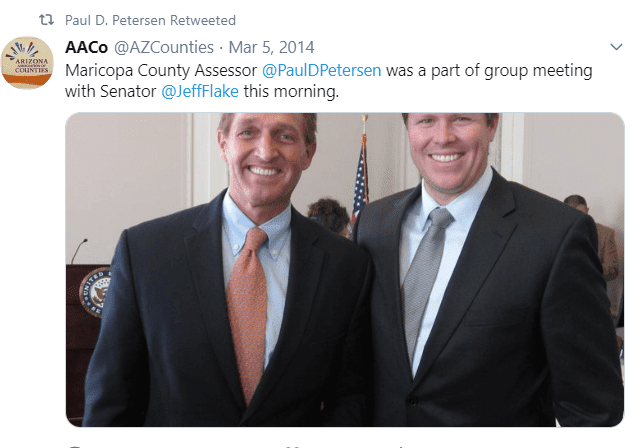 Federal law enforcement sources said they do not believe Flake has been interviewed about Petersen. However, additional photos that have surfaced showing Petersen with politicians like Flake and the late John McCain should likewise intrigue ethical investigators.

What was Petersen’s relationship with McCain? Petersen is mentioned in a news piece detailing McCain using his influence to secure $15 million in federal funds linked to a land purchase in Maricopa County to benefit a large political mega donor who piped almost $225,000 into McCain’s coffers.

Are there more questionable land deals to be probed? 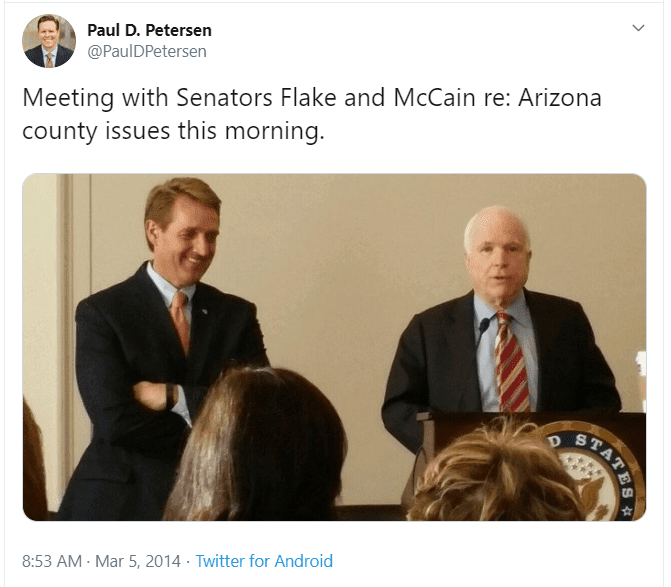 The indictment against Petersen, for the most part, said he began bringing pregnant women into the United States from the Marshall Islands in 2014. Petersen and his solo-practitioning law firm charged as much as $40,000 per adoption, placing the newborns with American parents — in many cases — against the will of their foreign birth mothers. At the same time Petersen was rubbing elbows with high profile politicians as an elected official himself and drawing a public salary. 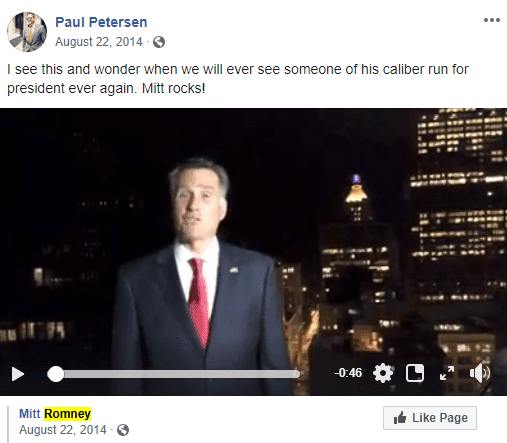 Today, Arizona Gov. Doug Ducey called for Peterson to step down and resign as Maricopa County Assessor. Ducey made no mention of Petersen’s work on Ducey’s campaign, however. Or Ducey’s shout outs to Petersen on social media.

Petersen, who was arrested Tuesday afternoon in Gila Bend, issued a statement saying he has done nothing wrong and is “extremely proud” of his work “to help mothers and fathers and create new families.”

Petersen, who works as an adoption lawyer in all three states, is charged with 32 counts in Arizona, 11 counts in Utah and 19 federal charges in Arkansas.

According to authorities, Petersen and his Marshallese partner/translator, Lynwood Jennet, recruited pregnant women in the Marshall Islands and paid for them to come to Arizona, Utah and Arkansas where they would live in houses or apartments provided by Petersen.

The women in Petersen’s Arizona operation then would be directed to sign up for the state’s Medicaid program, falsely claiming they were state residents in order have their pregnancy and birth costs covered by taxpayers, the indictment claims.

Once born, the babies would be put up for adoption, earning Petersen a hefty commission and the birth mothers an all-expenses-paid trip either to Arkansas or back home to the Marshall Islands.

Marshallese women who want to adopt out their children cannot come to the U.S. without a special visa, according to a treaty provision enacted in 2003. This, to avoid exploitation of vulnerable women in the impoverished nation.

Per reporting: Before his election, Petersen served nearly eight years in the Assessor’s Office working as the assessor’s representative at the Arizona Legislature and as the agency’s public information officer, according to his biography on the county assessor’s website.

This story is developing.

Amazing Polly was connecting these dots a month prior to the arrest: