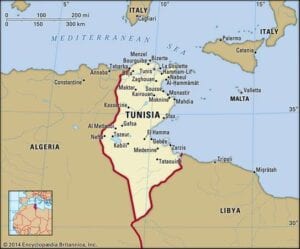 Tunisia, country of North Africa. Tunisia’s accessible Mediterranean Sea coastline and strategic location have attracted conquerors and visitors throughout the ages, and its ready access to the Sahara has brought its people into contact with the inhabitants of the African interior.

According to Greek legend, Dido, a princess of Tyre, was the first outsider to settle among the native tribes of what is now Tunisia when she founded the city of Carthage in the 9th century bce. Although the story is certainly apocryphal, Carthage nonetheless grew into one of the great cities and preeminent powers of antiquity, and its colonies and entrepôts were scattered throughout the western Mediterranean region. Carthage fought a series of wars with its rival, Rome. Rome prevailed in the mid-2nd century bce, razed Carthage, and ruled the region for the following 500 years. In the 7th century Arab conquerors converted the native Berber (Amazigh) population of North Africa to Islam. The area was ruled by a succession of Islamic dynasties and empires until coming under French colonial rule in the late 19th century. After achieving independence in 1956, Tunisia pursued a progressive social agenda and sought to modernize its economy under two long-serving presidents, Habib Bourguiba and Zine al-Abidine Ben Ali. However, Tunisia remained an authoritarian state with an all-powerful ruling party and no significant institutions of representative government. (For a discussion of political changes in Tunisia in 2011, see Jasmine Revolution.)

Tunisia’s culture is highly diverse, in part because of long periods of Ottoman and then French rule but also because populations of Jews and Christians have lived among a Muslim majority for centuries. Similarly, the capital, Tunis, blends ancient Arab souks and mosques and modern-style office buildings into one of the most handsome and lively cities in the region. Other cities include Sfax (Ṣafāqis), Sousse (Sūsah), and Gabès (Qābis) on the fertile coast and Kairouan (Al-Qayrawān) and El-Kef (Al-Kāf) in the arid interior.

Tunisia’s people are renowned for their conviviality and easygoing approach to daily life, qualities that Albert Memmi captured in his 1955 autobiographical novel Pillar of Salt:

We shared the ground floor of a shapeless old building, a sort of two-room apartment. The kitchen, half of it roofed over and the rest an open courtyard, was a long vertical passage toward the light. But before reaching this square of pure blue sky, it received, from a multitude of windows, all the smoke, the smells, and the gossip of our neighbours. At night, each locked himself in his room, but in the morning, life was always communal.

This warmth, joined with the country’s renowned hospitality and cuisine, has contributed greatly to Tunisia’s growing popularity as a destination for tourists from throughout Europe and the Americas. (Britannica)

Moderate risks of corruption are an obstacle for businesses investing in Tunisia. The country suffers from a culture of nepotism and cronyism, which are found throughout the government. These practices spurred popular upheavals in 2010, leading to the fall of the government in early 2011. Despite the uprisings of the Arab Spring, corruption is still rampant. High-level corruption is said to be replaced by petty corruption. Tunisia’s Penal Code criminalizes several forms of corruption, including active and passive bribery, abuse of office, extortion and conflicts of interest, but the anti-corruption framework is not effectively enforced, although the government has been taking preliminary steps to implement the laws (HRR 2016). Businesses may encounter bribery, extortion or facilitation payments, particularly in the public procurement sector. Even though gift-giving and gift-receiving are criminalized, these practices are commonplace in Tunisia. 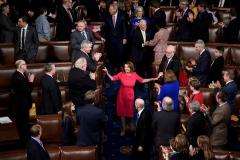