On April 26, 2017, an unsealed FISA Court Ruling unveiled a number of criminal activities that Barack Obama’s FBI and DOJ participated in during his time in office.  The report to date received little attention.  Now interest is brewing due to the recent actions of Congress and the report that is expected to be released in the upcoming weeks.

The FISA Court Ruling shows widespread abuse of the FISA mandate. According to the report, Obama’s FBI and DOJ performed searches on Americans that were against their 4th Amendment rights.  This went on for years.  One paragraph in the report states that 85% of the Section 704 and 705(b) FISA searches made during this time were non-compliant with applicable laws and therefore criminal.

FISA 705 warrants deal with US citizens outside of the country. 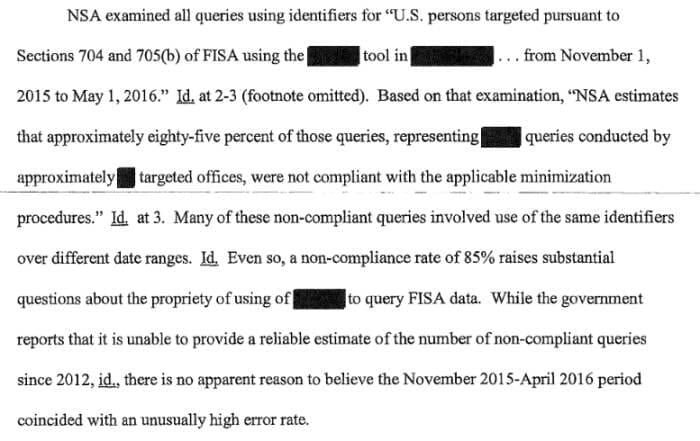 In addition, the report cites that at the same time that Obama’s DOJ and FBI were illegally searching Americans against their rights and unbeknownst to them, Obama’s FBI was providing this information to outside contractors who had no business or legal cause or claim the information.

The level of corruption within Obama’s FBI and DOJ is shocking. To date no one has been charged with crimes or is in jail as a result of the many crimes committed by this group of hoodlums.