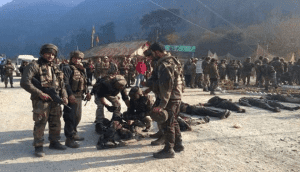 Pakistan’s media has developed a fascinating new thesis – India staged the Uri terror attack + to create hatred between the Sikh and Muslim communities in Kashmir.

Here’s how Pakistan’s The News International has come to the above conclusion.

“Sources in the security establishment insist that the military brigade headquarter (in Uri), which has been the target of what is believed to be India’s false flag operation, is Sikh dominated, chosen deliberately to antagonise the Sikhs from supporting the Muslims’ struggle in Kashmir,” the newspaper said today.

Pakistani security sources told the newspaper that “Sikhs have openly supported the just cause of Muslims” for independence in Kashmir. They then added that “it is always the Sikh community selected to suffer by the Hindu-led government in such self-designed attacks.”

“It is said that from this false flag operation, India wants to achieve more than one targets, including accusing Pakistan of backing terrorism, diverting the world attention from the killings by its forces in occupied , undermining Prime Minister Nawaz Sharif‘s address at the UN General Assembly session and creating hatred between the Sikh and Muslim communities in Indian-held Kashmir,” Pakistani security officials told The News International.

As evidence to show Uri was staged by India, the newspaper asked how terrorists could sneak in + so easily.

Go to Term Page
" >art laser sensors to detect any cross LoC movement,”the newspaper wrote. A source is quoted as telling the paper: “How then a handful of terrorists could sneak across, dodging the third largest army of the planet earth with its hi-tech gadgets and their ferocious K9 force?”

“Indian Home Minister Rajnath Singh, who is known for spewing venom against Pakistan, was to leave for his Russian tour on September 17 but cancelled his trip one day prior to the impending attack in Uri. ‘Hope he wasn’t waiting to see the unfolding of virtual play which he and (India’s National Security Advisor) Ajit Doval had jointly scripted,’ a source suggested.”

Another Pakistani newspaper Dawn called India bloodthirsty, in the light of BJP leader Ram Madhav saying that to avenge Uri a tooth for a tooth isn’t enough, and it should be “a jaw for one tooth.”

“…it was not a surprising reaction to the terror attack that came from Ram Madhav, an RSS-loaned trouble-shooter for the Hindutva establishment in Delhi. He promptly called for a jaw for each tooth, whatever that means in a region crawling with nuclear weapons,” Dawn wrote.

“For all the flaunting of Mahatma Gandhi’s name to appear in public view as a nonviolent polity, independent India has revealed a gargantuan appetite for inflicting violence, most of all on its own people,”Dawn wrote today.

The editorial then went into describing scripture.

“The Old Testament decreed an eye for an eye, a tooth for a tooth. Jesus subsequently softened God’s command. He advised offering the other cheek. Gandhi favoured the dictum as much as he could, but the extremist Hindus for all their loathing of the Christian faith settled for the Old Testament,” it said.