Anti-Trump impeachment witness Lt. Col. Alexander Vindman and his twin brother have been fired and escorted out of the White House by security, according to his Alexander Vindman’s attorney. 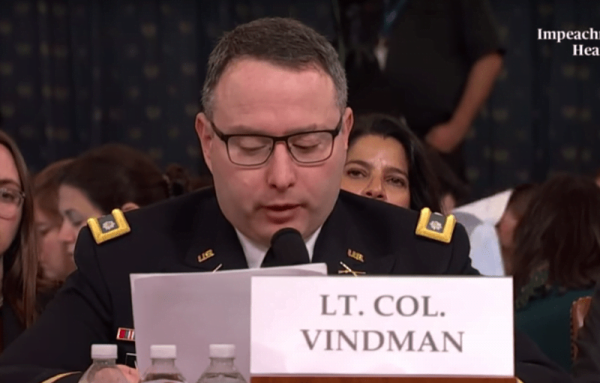 News — Lt. Col. Vindman was just escorted out of the White House by security and told his services were no longer needed.

I’m told Vindman walked out with his brother, who is an attorney for the NSC. It’s unclear if he was also fired but that was the expectation.

Vindman, a Ukraine specialist who sat on the National Security Counsel who was accused of being coached by House Intel Committee Chairman Adam Schiff (D-CA), was present on a July 25 phone call between President Trump and Ukrainian President Volodomyr Zelensky, when the US president asked that Ukraine investigate former VP Joe Biden and his son Hunter, as well as claims of pro-Clinton meddling in the 2016 US election.

He was also notably counseling Ukraine on how to counter President Trump’s foreign policy according to the New York Times, which led some to go as far as accuse him of being a double agent.

The now-former White House employee, who admitted to violating the chain of command when he reported his concerns over the call, had been rumored to be on the chopping block for much of Friday.

“He followed orders, he obeyed his oath, and he served his country… And for that, the most powerful man in the world – buoyed by the silent, the pliable, and the complicit – has decided to exact revenge,” said his attorney, David Pressman.

LTC Vindman escorted from WH, per his lawyer David Pressman: “He followed orders, he obeyed his oath, and he served his country… And for that, the most powerful man in the world – buoyed by the silent, the pliable, and the complicit – has decided to exact revenge.” pic.twitter.com/u0CAB13iln

Medal of Honor recipient MSG Leroy Petry defended President Donald Trump’s decision to fire LTC Alexander Vindman, saying that Vindman had shown he couldn’t be trusted. Petry made an appearance on Sunday morning’s “Fox & Friends” and responded to the news that Vindman had been fired from his post on the National Security Council and escorted from the White House.

“I respect Donald Trump’s actions on escorting him out of the White House because he, as a team player, he should have brought it up through the chain of command and then blown the whistle if it didn’t get approved,” Petry began. “So, exactly my insight is, I would fired him too, I can’t trust you on my team, if you can’t bring me things you don’t agree with.”

Petry went on to address the fact that House Speaker Nancy Pelosi and numerous others — including Vice President Joe Biden on the New Hampshire debate stage — had lauded Vindman as a hero.

“I appreciate your candor,” host Pete Hegseth, also an Army veteran, jumped in. “Wearing the uniform doesn’t make you immune from criticism especially on the National Security Council, it has now been identified you’re probably a part of leaking, certainly a part of concerted effort to hurt the president.”

Hegseth then pointed out what many have in the president’s defense: that every member of the National Security Council serves “at the pleasure of the president” and can be reassigned for any reason the White House chooses.

Petry went on to explain that Vindman, according to friends who had been with the lieutenant colonel in Ranger School, had referred to him as a “chow thief” and had not thought highly of him even then. “In ranger school, [they] said he couldn’t be trusted. They tried peering him out. They said, ‘Well, I guess it hasn’t changed much.’ Usually folks that try to make a big statue of something, what we call spotlighters in the military, trying to highlight themselves as a hero or doing something great. and you could do something great just doing your job.”

Hegseth jumped back in then to “translate” some of the military jargon Petry had used to describe Vindman, saying, “Chow thief, meaning that when there is limited food, you’re taking some so you can have some and your buddies don’t. Spotlight ranger is someone who, when the spotlight is on, you do a great job when spotlight is off, you’re not necessarily helping your buddies. And peered out means your fellow peers are voting against you to graduate from that particular school.”

The Vindman twins were just the beginning of the NatSec purge. The Washington Examiner reported the following Monday (Vindman’s fired on a Friday) that Trump cut 70 Obama-era holdovers from the NatSec.

President Trump is making good on his promises to “drain the swamp” and cut Obama-era holdovers from his staffs, especially the critical and recently controversial National Security Council.

Officials confirmed that Trump and national security adviser Robert O’Brien have cut 70 positions inherited from former President Barack Obama, who had fattened the staff to 200.

Many were loaners from other agencies and have been sent back. Others left government work.

Rep. Louie Gohmert (R-TX) said that Army Lt. Col. Alexander Vindman came off as more loyal to Ukraine than his oath to the United States and that he should face an Article 15 or court martial for his conduct. Gohmert made the comments in an interview on the WMAL-AM/FM Mornings On The Mall show with hosts Mary Walter and Vince Coglianese broadcast in the Nation’s Capital.