Violence and riots erupted the Sunday night in Kenosha, Wisconsin in response to an officer-involved shooting after Kenosha police responded to a domestic incident at a home and the riots continued for several more nights. The Democrat-media complex condemned Kenosha police for “shooting an unarmed black man in front of his children” for 4 straight days until it was learned that Jacob Blake was armed with a knife.

The suspect, Jacob Blake, is seen on video brawling with cops, ignoring officers and attempting to reach for something in his vehicle before being shot in the back multiple times. Wisconsin Democrat Attorney General Josh Kaul refused to tell reporters if Jacob Blake was reaching for a weapon prior to being shot by a police officer. It turns out there was a knife in Blake’s vehicle on the driver side floorboard!

This is the shooting video of Jacob Blake in Kenosha, WI. pic.twitter.com/yerWbsSxQU

On Tuesday, two people were fatally shot during the protests and a 17-year-old Kyle Rittenhouse from Illinois, who was there to protect local small businesses from looters and rioting arsonists after a day of lifeguarding and helping to clean graffiti at a nearby school, was arrested and faces several charges for the death of the two violent rioters.

The puppet Democrats in Wisconsin, including Governor Tony Evers wanted Soros-funded riots so they didn’t disclose that Jacob Blake was indeed in possession of a knife until after 3 nights of violence and bloodshed which ended in 2 deaths and many others wounded. On Wednesday, the Wisconsin DOJ confirmed that the Kenosha police officer who shot Jacob Blake is Rusten Sheskey and says Blake “admitted that he had a knife in his possession.”

“During the investigation following the initial incident, Mr. Blake admitted he had a knife in his possession. DCI agents recovered a knife from the driver’s side floorboard of Mr. Blake’s vehicle. A search of the vehicle located no additional weapons.”

Police also deployed a taser to attempt to stop Blake, but it was unsuccessful and Blake walked around the front of his SUV, opened the driver side door and possibly reached for something. At this point, the officer discharged his weapon. 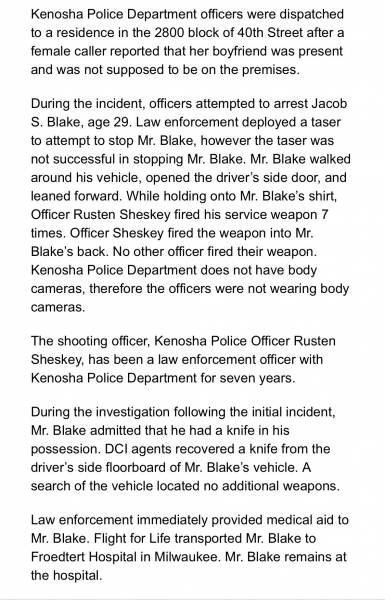 A Kenosha Black Lives Matter speaker at a Kenosha rally on the following Saturday went off script a bit and called for retaliation killings. The speaker told the hundreds in attendance, “You kill one of us, it’s time for us to kill one of yours… Why are we the ones who have to keep burying one of ours.” And then later that night one Trump supporter Jay Bishop, whose real name is Aaron Danielson, was gunned down in cold blood by far left antifa thug Michael Reinoehl from Oregon. Far left Antifa members cheered the news of the Trump supporter’s death.

President Trump planned a visit to the devestated town.