The British Brainwashing Corporation aka the BBC posted a hit piece defaming a whistleblower health worker who bravely spoke on social media revealing COVID is a “plandemic” and had received “messages of support from people including NHS workers who are speaking out“.

Now likely to be sanctioned or fired from her job for daring to speak the truth, Louise Hampton who works for the NHS, revealed that during the “crisis” she had little to no work to perform and was embarrassed that the public were encouraged to clap and celebrate the NHS “heroes” who were “risking their lives daily” to fight the deadly COVID-19 virus.

But so powerful was her video message it quickly racked up nearly half a million views across Facebook and Twitter before being banned. Here is how the BBC’s “Anti-disinformation Unit” reported the story: 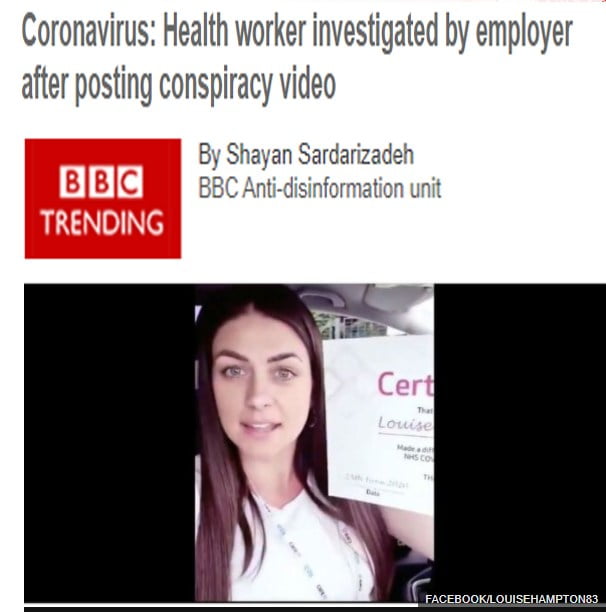 “A worker at a major NHS provider is under investigation by her employer for posting a video on social media in which she claimed that Covid-19 does not exist.

Louise Hampton, who works for Care UK, posted a video to Facebook on Wednesday in which she claimed her service had been “dead” throughout the Covid-19 pandemic and she had done nothing at all.

Brandishing her NHS badge and a certificate signed by a Care UK manager that thanked her for making a difference to patients, Ms Hampton said: “Apparently, I worked really hard during Covid.”

She then went on a rant peppered with profanity and claimed that she had done no work “because our service was dead. We weren’t getting the calls. It was dead. Covid is a load of …

In a statement, Care UK, which provides call centres and a range of other services to the NHS, said it was investigating.

“We are aware of this video, which we consider to be materially inaccurate in a number of ways, and can confirm that a member of staff is subject to investigation,” a spokesperson said.

“We expect all our colleagues and services to support the work of the NHS in giving the public the right information and support during the pandemic. Our call centres were, in fact, exceptionally busy, handling a peak of 400% more calls than usual. Our teams showed huge commitment and dedication in delivering the service, and we have rightly thanked them for the efforts they have made.”

In a later post, Ms Hampton claimed she had received “messages of support from people including NHS workers who are speaking out”.

However, copies of the video had already proliferated across social media sites. It was particularly popular in groups and communities promoting Covid-19 misinformation.

QAnon supporters – who believe Donald Trump is secretly saving the world from a cabal of paedophiles – have also spread unfounded theories about coronavirus, calling it a “deep state” hoax and promoting misinformation about face masks and vaccines.

She also made references to Plandemic, a coronavirus conspiracy theory video that went viral in May and was subsequently taken down by major social media networks.