an internationally renowned Serbian performance artist known for her work involving occult gory rituals. She came to notoriety during the PIZZAGATE scandal when John Podesta and his brother Tony, who were allegedly running a child sex ring, were being invited one of her “spirit cooking dinners”.[1] Abramovic is associated with the Rockefeller Modern Institute of Art.[2] In 1996, Abramović worked with Jacob Samuel to produce a cookbook of “aphrodisiac recipes” called Spirit Cooking. These “recipes” were meant to be “evocative instructions for actions or for thoughts”.[7] For example, one of the recipes calls for to “mix fresh breast milk with fresh sperm milk.”[8]

In 1997, Abramović created a multimedia Spirit Cooking installation. This was originally installed in the Zerynthia Associazione per l’Arte Contemporanea in Rome, Italy and included white gallery walls with “enigmatically violent recipe instructions” painted in pig’s blood.[9] Abramovic is a member of the State Department’s Art in Embassies Program. And here she is pictured with Jeff Koons (whose ex-wife said in an interview that he wanted sexually impossible things, and that one day she walked into the bedroom to see their son playing with Koons’ genitals, and Koons was letting it happen, laughing it off) in an article on Art in Embassies written by Hillary Clinton in 2013 (great year for the State Department, huh?) Koons, who has been pictured with the Rothschild family, is also on the Board of Directors of the International Centre for Missing & Exploited Children (the same one Richard Branson is involved with…Branson being the one that publicly promoted Terramar on Twitter in 2012, and hosted the NXIVM sex trafficking cult on his island). Koons Family Institute serves as the official research branch of the International Centre for Missing & Exploited Children (ICMEC).

She had a very difficult childhood and after birth, did not live with her parents for six years. Her Wikipedia article details the circumstances to some extent;[3] she goes into more details in her book: Walk Through Walls: A Memoir.[4][5][6]

Much of Abramović’s work has elements from Thelema, an occult (meaning hidden or occluded) religion founded by MI6-agent Aleister Crowley in 1904.

In 2013 AD Sara Wookey wrote, “An Open Letter From a Dancer Who Refused to Participate in Marina Abramovic’s MOCA Performance.” She is “a professional dancer and choreographer with 16 years of experience” and has “a Master of Fine Arts degree in Dance from the University of California, Los Angeles.”
Her issue pertained to “the conditions being asked of artists” and thus, her “overriding interest in organizing and forming a union that secures labor standards and fair wages for fine and performing artists.” Reportedly, “Abramovic’s call for artists was, as the LA Times quoted, for ‘strong, silent types’…I refuse to be a silent artist regarding issues that affect my livelihood and the culture of my practice.”

Now, I am certainly utterly empathetic to these point and more I will quote below but what, pray tell, was the masterpiece for which this extremely educated and experienced artist refused to participate? She auditioned and got the part for “nude females to re-enact Abramovic’s signature work, ‘Nude with Skeleton’ (2002), at the center of tables with seats priced at up to $100,000 each.”

I refused to participate as a performer because what I anticipated would be a few hours of creative labor, a meal, and the chance to network with like-minded colleagues turned out to be an unfairly remunerated job. I was expected to lie naked and speechless on a slowly rotating table, starting from before guests arrived and lasting until after they left (a total of nearly four hours).
I was expected to ignore (by staying in what Abramovic refers to as “performance mode”) any potential physical or verbal harassment while performing. I was expected to commit to fifteen hours of rehearsal time, and sign a Non-Disclosure Agreement stating that if I spoke to anyone about what happened in the audition I was liable for being sued…
I was to be paid $150. During the audition, there was no mention of safeguards, signs, or signals for performers in distress, and when I asked about what protection would be provided I was told it could not be guaranteed. What I experienced as an auditionee for this work was extremely problematic, exploitative, and potentially abusive. 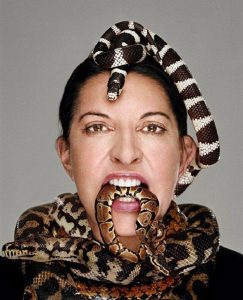 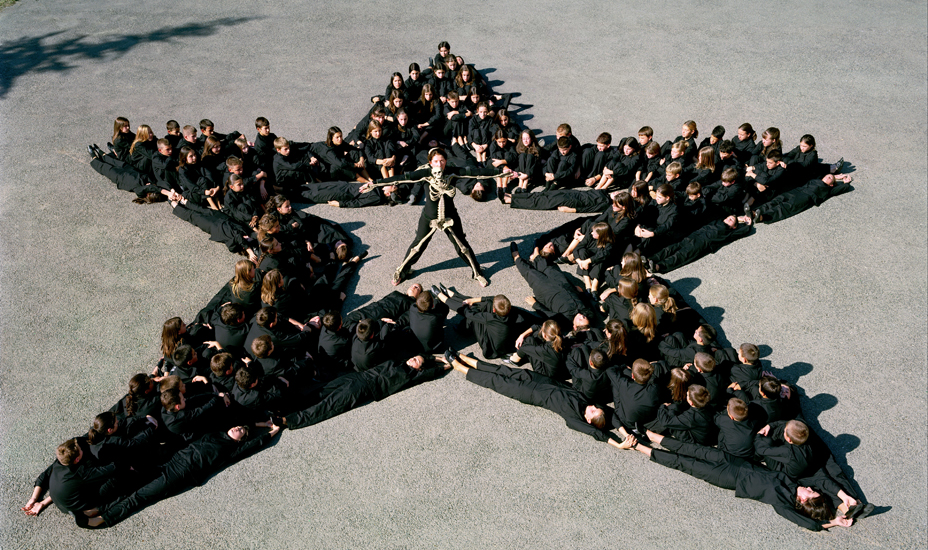 More of her disgusting art HERE