A Mesoamerican deity, also called Kukulkan and Nine Wind, highlighted in Acharya S’s The Christ Conspiracy, and even more so in Suns of God. In Christ Con, it is included the fact that mainstream scholarship does not allow for contact between the “Old” and “New” Worlds, but I suggested that the presence of the “mythos” or mythical archetype in Mexico centuries before “first contact” would serve as an indication that there was pre-Columbian contact.

(However, the core shared traditions may also predate the first migrations of peoples into the Americas, possibly traceable to back to Africa or points in between. Some of these parallels may also emanate from observations of globally detectable natural phenomena directly from a local perspective.)

After making the above disclaimer, I commented:

“However it got there, there can be no doubt as to the tremendous similarity between the Mexican religion and Catholicism.”

In both books, it is quoted and cited the abundant scholarship reflecting what the conquistadors/Jesuits themselves had recounted, common knowledge among modern comparative religion and Mesoamerican scholars.

Indeed, these correspondences were so commonly recognized that many natives reportedly converted to Christianity with relatively little effort because of the similarities between their religion and that of the Christians.

The speed with which many Mesoamerican people converted to Christianity had much to do with Quetzalcoatl.

Some people converted because they identified Cortes with their god; they believed the new rituals the Spanish missionaries introduced were another version of practices used to worship Quetzalcoatl.

This process was aided by a resemblance between the Spanish missionaries and the Aztec priests of Tenochtitlan, both of whom wore long black coats. Other people converted because they identified Christ with Quetzalcoatl.

Both figures had a message of peace; in addition, the myth of Quetzalcoatl’s descent into the underworld to find bones for a future human race, and the use of his own blood to bring the bones to life, had parallels in the story of Christ’s crucifixion, death and resurrection.

I continue to explore how this phenomenon has come to be and to raise this issue of the Mesoamerican correspondences to Christianity, included in 2012 Astrotheology Calendar:

Like Christ, Quetzalcoatl is born of a virgin, the goddess Coatlique, and is a great teacher of civilization.

Also like Jesus, Quetzalcoatl strikes down the Prince of Darkness and Evil (Tezcatlipoca), who attempts to deceive mankind.

Quetzalcoatl’s blood is used to convey life to the humans whose bones he saved, while Christ’s blood delivers eternal life and saves humans from death.

Quetzalcoatl became the “second sun,” while Jesus is the “sun of righteousness” arising with healing on his wings. (Mal 4:3) Both Christ and Quetzalcoatl are identified with the morning star. Quetzalcoatl also represents one of the four cardinal points, one of four “brothers,” while Christ has four brothers (Mt 13:55).

Both figures are depicted as light-skinned and bearded, and it is claimed of both that they will return to vanquish their enemies.

Jesus came with a sword and threatened to bring chaos to the earth, while Quetzalcoatl,

“caused a rain of fire to devastate the earth, drying up all the rivers and destroying man…”

Quetzalcoatl’s acts are also similar to several of the Jewish god Yahweh’s in Genesis, for example.

Also like Jesus, who identifies himself (Jn 3:14-15) with the serpent Moses raised up at Numbers 21:0, Quetzalcoatl and Kukulkan are identified with the serpent, a relationship dramatically reflected at Kukulkan’s temple at Chichen Itza.

These contentions are all cited using modern research such as can be found in National Geographic – Essential Visual History of World Mythology (pag. 391 – below images), articles on Wiki, which have been vetted for accuracy, and primary sources wherever possible. 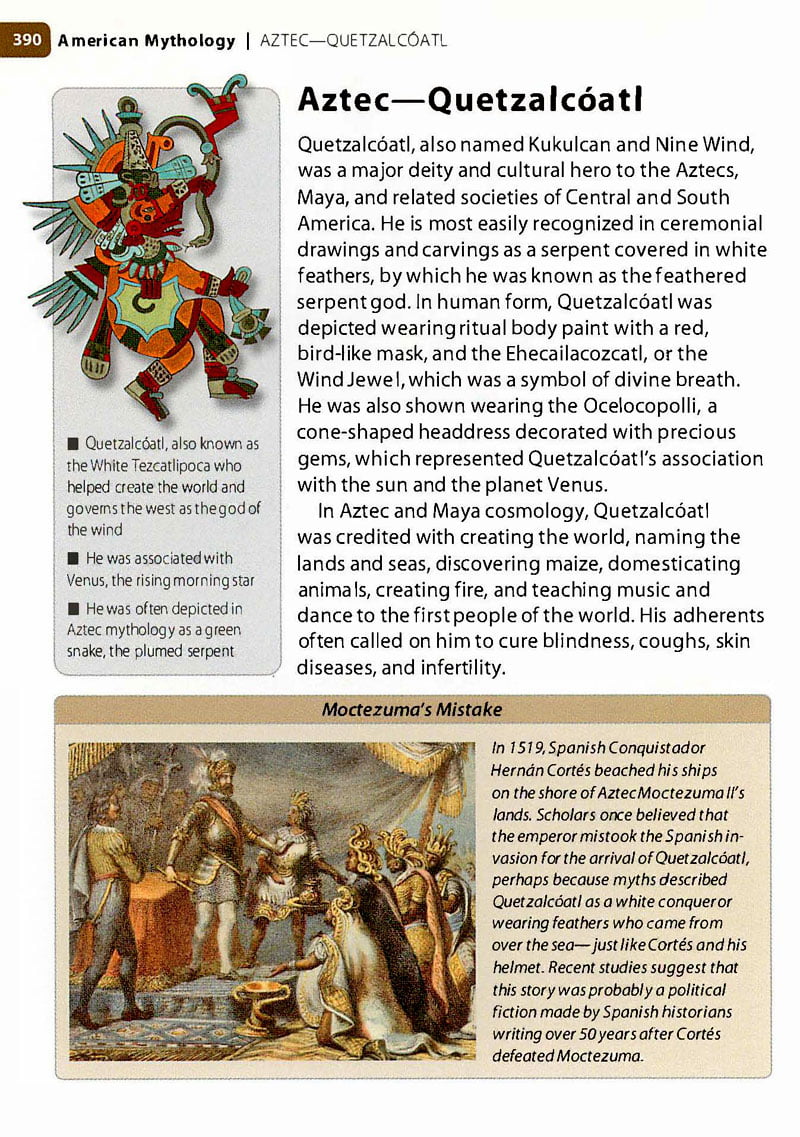 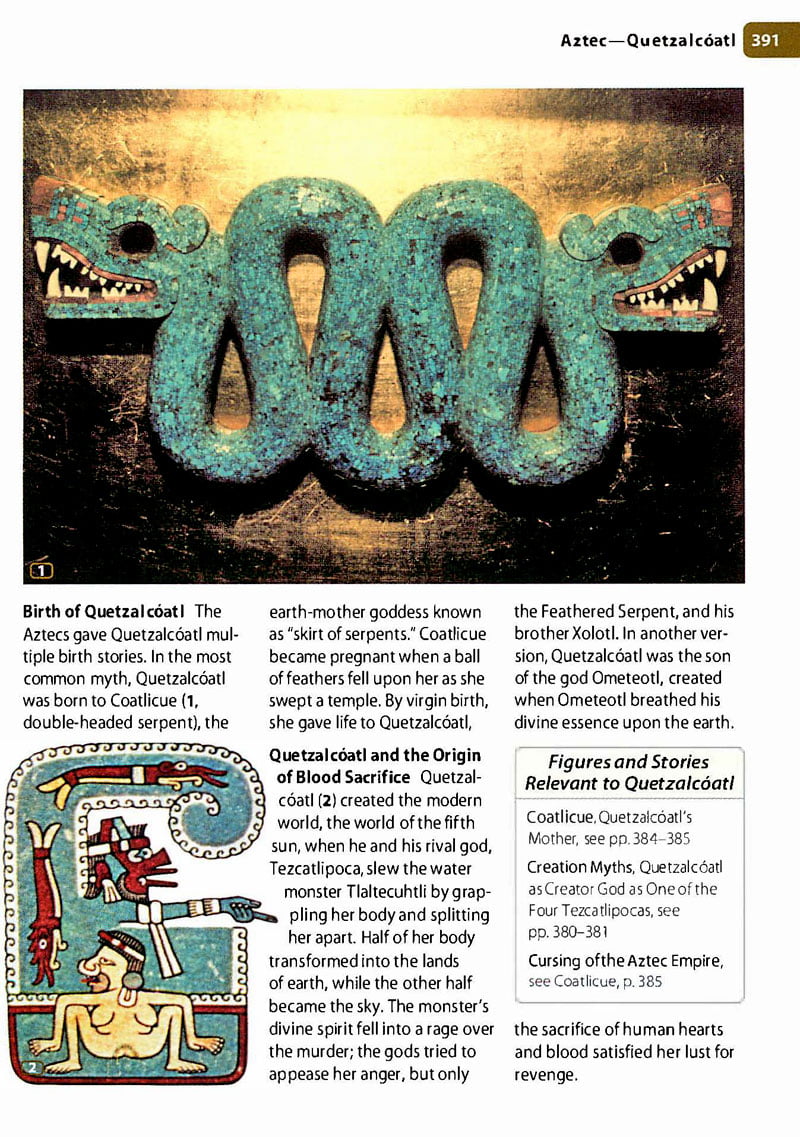 As concerns the virgin birth, it is clear that such a concept was understood to have been applied to a “priest-king” named Quetzalcoatl.

Based on the abundantly pervasive concept of the virgin birth found elsewhere, as well as the fact that kings, priests and other “authorities” have frequently been identified with or as gods, it is logical to suggest that the attribute attached to the supposed “king” Quetzalcoatl was also that of the god.

In Living Myths – How Myth Gives Meaning to Human Experience, under the entry “The Story of Quetzalcoatl: The Hero Becomes a God,” classical scholar J.F. Bierlein summarizes this issue:

Quetzalcoatl was many things:

These identities became fused together over time.

Concerning the birth of this composite figure, Bierlein further states:

There are several stories regarding the birth of Quetzalcoatl. One version has him born of a virgin named Chimalman, to whom the supreme god, Onteotl (the Great Father-Mother) appeared in a dream. Onteotl showed his/her face to Chimalman and her two sisters.

The two sisters died instantly from the gaze, but Chimalman, pure of heart, survived and conceived a son, Quetzalcoatl. In another version, the virgin Chimalman swallows a sacred piece of jade and conceives Quetzalcoatl.

A third story of Quetzalcoatl’s birth is directly tied to his identify as a deity of the sun and planet Venus.

In this story, Quetzalcoatl is the son of a mother who already has four thousand children who have left her and now form the stars of the Milky Way. This mother was saddened to be alone and have her children so far from her bosom. She began to weep from longing.

Some of the pertinent information concerning Quetzalcoatl’s virgin birth can be found in the Codices Telleriano-Remensis and Vaticanus A, folio 27v, from a Spanish commentator, Pedro de los Rios.

Once more, many of these commonalities between Christ and Quetzalcoatl were remarked upon by the first non-native chroniclers, not a few of whom were so mortified to find basically their entire religion among the “savages” that they felt the need to destroy thousands of Mesoamerican writings and artifacts.