While speaking at a conference in 2018, Wuhan Institute of Virology and collaborator and gain-of-function advocate Dr. Ralph Baric advised attendees on how to “make money” in the next pandemic.

Baric – who’s attended conferences at the Wuhan Institute of Virology and is described by Wuhan’s “bat woman” Shi Zhengli as one of her “longtime collaborators” – made the comments at an April 2018 event hosted at the University of North Carolina Chapel Hill. Baric – who’s described lifting bans on gain-of-function research as “critical” – also provided the Wuhan lab with humanized mice to likely conduct the controversial form of research with SARS-like coronaviruses.

“Gain-of-function represents one of those approaches that is a crucial tool for public health preparedness and response,” Baric asserted in 2014 while lobbying against a moratorium on gain-of-function research.

During his 2018 speech “Imagining the Next Flu Pandemic – and Preventing it!” he presents a slide titled “Global Catastrophe: Opportunities Exist.” The slide outlines what type of stocks and industries surged during the Ebola outbreak, which he uses to extrapolate financial advice on how to “make money in the next pandemic.”

“I wanted to give you good news. There are winners out there, right? So if you ever want to be prepared and make money in the next pandemic, if that’s what you want to do, buy stock in Hazmat suit makers and protective clothing or companies that make antiviral drugs for that particular pandemic,” he notes.

Baric adds that the aforementioned sectors and stocks would “probably do pretty well” before highlighting that “there are actually mutual funds for pandemic preparedness.”

“Some products do well. 1918 including masks, same thing today,” he advises. 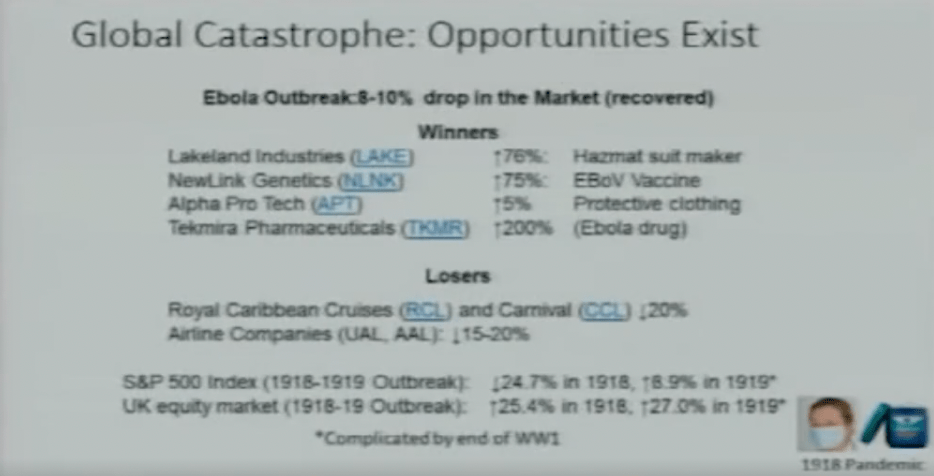 While speaking over the following slide – “Pandemics: Opportunity” – Baric posits that “pandemics really are times of opportunity.”

“There is an opportunity for people to have political gain, financial gain, and personal gain during times of social upheaval, and that will probably occur,” he adds. 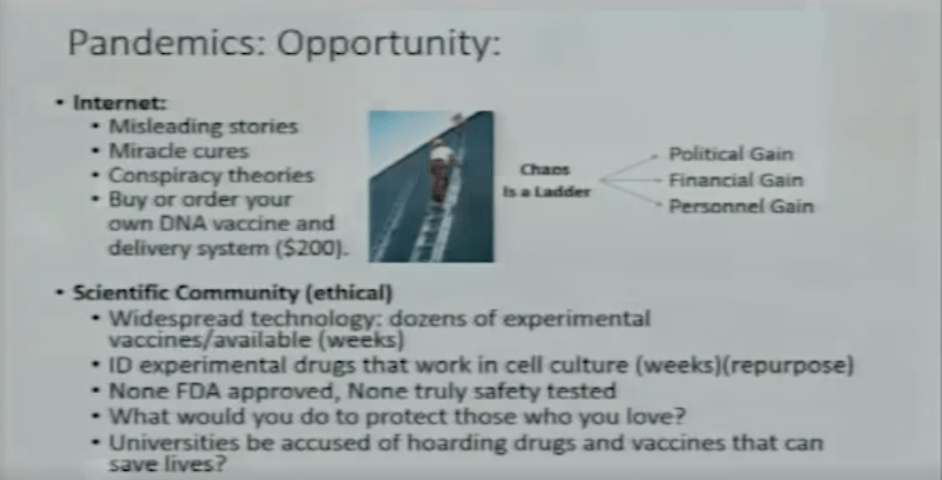