The Centers for Disease Control and Prevention (CDC) released a report Friday in which it quietly admitted that the mask mandates in America were allegedly responsible for less than a 2 percent decrease in COVID case growth after ONE HUNDRED DAYS. But still the CDC advises wearing masks, despite their own numbers. (READ: CDC Caught Inflating COVID Death Numbers By At Least 1600 Percent While Trump Was President).

The CDC claims that between March 1 and December 31 of 2020 the mask mandates, which were executed in the vast majority of United States counties, stopped COVID case growth rates by one half of one percent after 20 days and by less than 2 percent after 100 days. 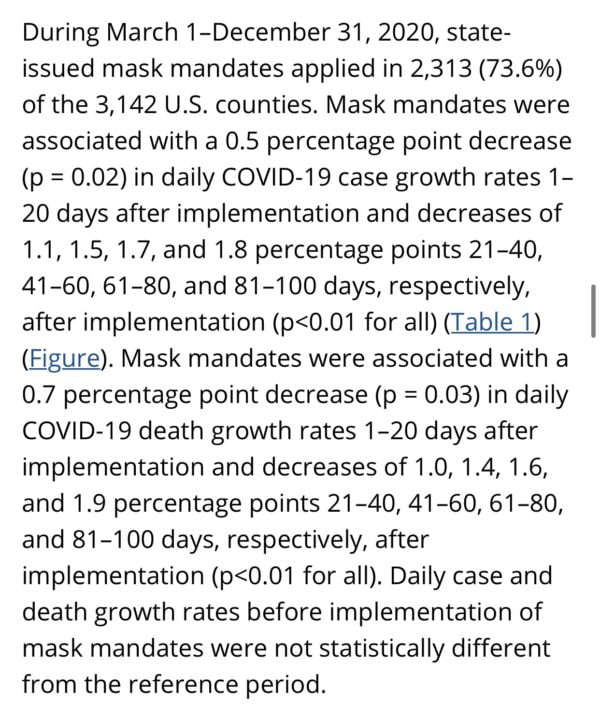 The CDC is now legally requiring red-blooded Americans to wear face masks on all public transportation as globalists try to push the concept of “double-masking” on the populace. Since the election, the World Health Organization admits that PCR tests are not totally reliable on the first try and a second test might be needed. This corresponds with CDC’s quiet admission that it blended viral and antibody test results for its case numbers and that people can test positive on an antibody test if they have antibodies from a family of viruses that cause the common cold. Hospitals in Florida had so many accuracy complications that Orlando Health had to admit that its 9.4 percent positivity rate got recorded at 98 percent. (READ: The TRUTH About Fauci and Gates And NIH Owning A Stake in the Vaccine).

“The groundbreaking peer-reviewed research…asserts that the CDC willfully violated multiple federal laws including the Information Quality Act, Paperwork Reduction Act, and Administrative Procedures Act at minimum. (Publishing Journal – Institute for Pure and Applied Knowledge / Public Health Policy Initiative) Most notably, the CDC illegally enacted new rules for data collection and reporting exclusively for COVID-19 that resulted in a 1,600% inflation of current COVID-19 fatality totals,” the watchdog group All Concerned Citizens declared in a statement provided to NATIONAL FILE, referring to the Institute for Pure and Applied Knowledge study.

“The research demonstrates that the CDC failed to apply for mandatory federal oversight and failed to open a mandatory period for public scientific comment in both instances as is required by federal law before enacting new rules for data collection and reporting. The CDC is required to be in full compliance with all federal laws even during emergency situations. The research asserts that CDC willfully compromised the accuracy and integrity of all COVID-19 case and fatality data from the onset of this crisis in order to fraudulently inflate case and fatality data,” stated All Concerned Citizens.

“On March 24th the CDC published the NVSS COVID-19 Alert No. 2 document instructing medical examiners, coroners and physicians to deemphasize underlying causes of death, also referred to as pre-existing conditions or comorbidities, by recording them in Part II rather than Part I of death certificates as “…the underlying cause of death are expected to result in COVID-19 being the underlying cause of death more often than not.” This was a major rule change for death certificate reporting from the CDC’s 2003 Coroners’ Handbook on Death Registration and Fetal Death Reporting and Physicians’ Handbook on Medical Certification of Death, which have instructed death reporting professionals nationwide to report underlying conditions in Part I for the previous 17 years. This single change resulted in a significant inflation of COVID-19 fatalities by instructing that COVID-19 be listed in Part I of death certificates as a definitive cause of death regardless of confirmatory evidence, rather than listed in Part II as a contributor to death in the presence of pre-existing conditions, as would have been done using the 2003 guidelines. The research draws attention to this key distinction as it has led to a significant inflation in COVID fatality totals. By the researcher’s estimates, COVID-19 recorded fatalities are inflated nationwide by as much as 1600% above what they would be had the CDC used the 2003 handbooks,” stated All Concerned Citizens.

“Then on April 14th, the CDC adopted additional rules exclusive for COVID-19 in violation of federal law by outsourcing data collection rule development to the Council of State and Territorial Epidemiologists (CSTE), a non-profit entity, again without applying for oversight and opening opportunity for public scientific review. On April 5th the CSTE published a position paper Standardized surveillance case definition and national notification for 2019 novel coronavirus disease (COVID-19) listing 5 CDC employees as subject matter experts. This key document created new rules for counting probable cases as actual cases without definitive proof of infection (section VII.A1 – pages 4 & 5), new rules for contact tracing allowing contact tracers to practice medicine without a license (section VII.A3 – page 5), and yet refused to define new rules for ensuring that the same person could not be counted multiple times as a new case (section VII.B – page 7),” stated All Concerned Citizens.

“By enacting these new rules exclusively for COVID-19 in violation of federal law, the research alleges that the CDC significantly inflated data that has been used by elected officials and public health officials, in conjunction with unproven projection models from the Institute for Health Metrics and Evaluation (IHME), to justify extended closures for schools, places of worship, entertainment, and small businesses leading to unprecedented emotional and economic hardships nationwide. A formal petition has been sent to the Department of Justice as well as all US Attorneys seeking an immediate grand jury investigation into these allegations,” All Concerned Citizens stated.

Here is a demonstration of the new COVID-19 testing methods in Chinese airports.

Have you printed your boarding pass yet? pic.twitter.com/3HCo5yaImD

NATIONAL FILE reported: National Institutes of Health (NIH) own a financial stake in the Bill Gates-funded Moderna Coronavirus vaccine, raising big questions about the supposed impartiality of the federal government’s policy decisions during the Coronavirus outbreak. NIAID director Dr. Anthony Fauci, a financial ally of Bill Gates whose institute is part of NIH, has been critical of Hydroxychloroquine and the FBI even raided a health spa serving intravenous vitamin C, which are competitors to a vaccine. (RELATED: Eight NIH Coronavirus Panel Experts Disclose Financial Relationships With Price-Hiking Drugmaker Gilead).

“We do have some particular stake in the intellectual property” for the Moderna vaccine stated Francis Collins, the director of NIH, in a revelatory recent Economic Club panel discussion. “One of the vaccines– the one that’s furthest along– what started, actually, at the federal government in our own Vaccine Research Center at NIH– then worked with a biotechnology company called Moderna to get to where we are now, with very impressive Phase I results and getting ready to go into a large-scale trial as early as July. That one, of course, we do have some particular stake in the intellectual property. Others, though, come from companies who’ve invested their efforts into getting them to the point where they might now be ready for a trial,” Collins stated.

“The U.S. government may jointly own a potential coronavirus vaccine. The National Institutes of Health (NIH) has played a critical role in coronavirus research for years. Building off this work, federal scientists have helped design and test mRNA-1273—a vaccine candidate developed in partnership with Moderna.[2] The federal government has filed multiple patents covering mRNA-1273. In this report, we describe two patent applications that list federal scientists as co-inventors.[3] If the government successfully pursued its patent filings, the resulting patents would likely confer significant rights. We also review recently disclosed contracts between NIH and Moderna. The agreements suggest that NIH has not transferred its rights, but instead maintains a joint stake.”

Continue Reading at The National File…