In Colonial America under the rule of King George in England, tyranny was rearing its ugly head with the passing of several of the tax acts including the currency act and stamp act imposing taxes on the colonies and creating increasing tension. The British would impose martial law in the later part of the decade to impose their mighty power over the colonist. The Seven Years

Go to Term Page
" >War, a global conflict known in America as the French and Indian War, officially begins when England declares war on France. However, fighting and skirmishes between England and France had been going on in North America for years. 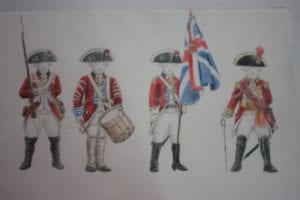 The British soldiers (redcoats) arrive in Boston under martial law to punish and control the defiant Americans in Boston who deemed the taxes implemented as unconstitutional since the Americans had no representation in Parliament to vote or voice their opinions. The British kept approximately 2000 redcoats in and around Boston. The troops disembarked and initially encamped on the Boston Commons, as well as, in the Court ...
Read More
June 15, 1767 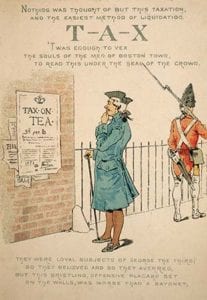 Townshend Acts, (June 15–July 2, 1767), in U.S. colonial history, series of four acts passed by the British Parliament in an attempt to assert what it considered to be its historic right to exert authority over the colonies through suspension of a recalcitrant representative assembly and through strict provisions for the collection of revenue duties. The British American colonists named the acts after Charles Townshend, who sponsored ...
Read More
November 29, 1766

Benjamin Franklin on the Price of Corn and Management of the Poor, written November 29, 1766: "I think the best way of doing good to the poor, is not making them easy in poverty, but leading or driving them out of it." ...
Read More
May 21, 1766 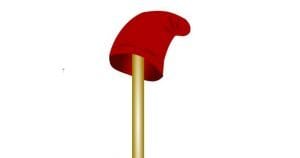 Although little is ever spoken of the liberty pole today, at the time of the American War for Independence and decades prior, they were the symbol of self-government and freedom from tyranny. Typically, wherever they were formed, Sons of Liberty gathered in town commons under a large tree. These trees-turned-meeting-places were soon known around the colonies as "Liberty Trees.” Some of the greens in towns with ...
Read More
March 18, 1766 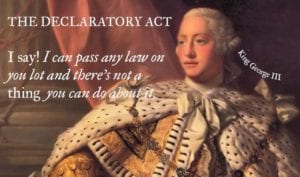 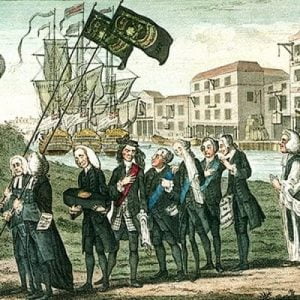 In an effort to raise funds to pay off debts and defend the vast new American territories won from the French in the Seven Years’ War (1756-1763), the British government passes the Stamp Act on this day in 1765. The legislation levied a direct tax on all materials printed for commercial and legal use in the colonies, from newspapers and pamphlets to playing cards and dice ...
Read More
September 1, 1764 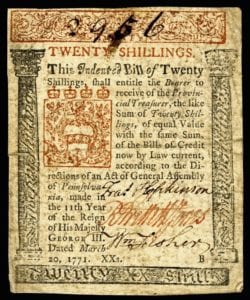 By the mid 1700's Britain was at its height of power, but was also heavily in debt. Since the creation of the Bank of England, they had suffered four costly wars and the total debt now stood at £140,000,000, (which in those days was a lot of money). In order to make their interest payments to the bank, the British government set about a program to ...
Read More

2 years ago
A spokesman for secretary of state Jesse White said the non-citizens are not illegal aliens, rather they are here legally and the new “Automatic Voter Registration” law was to blame. This is precisely why the Democrats are pushing for “motor voter” laws and other automatic registration laws. Out of the 574 non-citizens who were registered to vote in Illinois, 16 reportedly cast ballots in the 2018 election. (that number is probably much higher) WGN reported: Illinois lawmakers are raising questions about the integrity of state elections after the secretary … Read More

2 years ago
Headlines Jan 21, 2020 Mitch McConnell Drafts ‘Kill Switch’ Resolution To Halt Trump Trial If Democrats Try To Drag it Out Desperate Pencil Neck Tries to Run Senate Trial; House Intelligence Committee Chairman Adam Schiff (D-CA) argued on Tuesday that a refusal by the Senate to agree to Democrats’ demand to allow new witnesses and evidence in the impeachment trial without a vote would deem President Donald Trump guilty regardless of the verdict. He Can’t Stop Lying: Schiff Tells Senate he Gave Republicans Equal Time During Slap-Dash Schiff … Read More

2 years ago
Democrat Adam Schiff leaked sensitive and classified House Committee materials in his obsession to politically damage President Trump. In an exclusive report, The Gateway Pundit provides the evidence below. On July 12, 2018, Democrat Representative Adam Schiff sent John Szobocsan a letter on official letterhead requesting that Mr. Szobocsan participate in an interview in front of the House Permanent Select Committee on Intelligence (HPSCI): Mr. Szobocsan was an associate of Peter W. Smith who had tried to obtain Hillary Clinton’s emails and who then reportedly committed suicide in … Read More

Ocasio-Cortez: “The World Is Going To End In 12 Years If We Don’t Address Climate Change”

3 years ago
At a Martin Luther King Jr. Day event with Ta-Nahesi Coates, newly elected Rep. Alexandria Ocasio-Cortez (D-NY) issued a chilling warning about climate change. “Millennials and people, you know, Gen Z and all these folks that will come after us are looking up and we’re like: The world is going to end in 12 years if we don’t address climate change and your biggest issue is how are we gonna pay for it?” Ocasio-Cortez told Coates. “This is the war — this is our World War II.” [email protected] … Read More

5 years ago
Liberal women’s events around the country were backed by more than 50 groups which in turn were supported by former Nazi and now current Democrat financier George Soros. Previous anti-pro-life efforts include Soros funding a three-year campaign to abolish pro-life laws around the world, particularly in Ireland. The march was led by the following four co-chairs: Tamika D. Mallory, whose bio says she “has worked closely with the Obama Administration as an advocate for civil rights issues, equal rights for women, health care, gun violence, and police misconduct.” She also served … Read More

12 years ago
What’s it all about? In a nutshell, the 5-4 Citizens United decision allowed corporations (including certain nonprofit corporations) and labor unions to expand their role in political campaigns. The case did not affect contributions to a candidate’s actual campaign. It is still illegal for companies and labor unions to give money directly to candidates for federal office. What changed: many outside, non-candidate organizations could now raise and spend unlimited amounts of money to support or oppose a candidate. The high court reasoned that as long as these unlimited funds aren’t … Read More

12 years ago
Citizens United v. Federal Election Commission, 130 S.Ct. 876 (Jan. 21, 2010), is a landmark decision from the United States Supreme Court. In 2008, Citizens United produced a television documentary attacking Hillary Clinton, then a candidate for President. It wanted to pay a video on demand service to make the documentary available during the primary election season; however, this was considered illegal under the McCain-Feingold campaign finance act. The group sued, arguing both that McCain-Feingold does not apply to video-on-demand services and that McCain-Feingold is unconstitutional. The Supreme … Read More

The Conspiracy to Get Neurotoxic Aspartame FDA Approved: The Bitter Truth is Not So Sweet!

41 years ago
The day after Ronald Reagan’s inauguration, Searle Chairman Donald Rumsfeld took the steps to re-apply aspartame’s approval for use by the FDA. New FDA commissioner Arthur Hayes Hull, Jr., appointed a 5-person Scientific Commission to review the board of inquiry’s decision to ban Aspartame. It did not take long for the panel to decide 3-2 in favor of maintaining the ban of aspartame. Hull then decided to appoint a 6th member to the board, which created a tie in the voting, 3-3. Hull then decided to personally break the tie … Read More

Dr. L. Parry Writing in the British Medical Journal asks: “How is it that smallpox is five times as likely to be fatal in the vaccinated as in t…

Thomas Jefferson: “I have given up newspapers in exchange for Tacitus and Thucydides, for Newton and Euclid; and I find myself much the happier….

210 years ago
Thomas Jefferson said the following in a Letter to John Adams, dated January 21, 1812: “I have given up newspapers in exchange for Tacitus and Thucydides, for Newton and Euclid; and I find myself much the happier.” … Read More

246 years ago
Toward the end of 1775, Muhlenberg was authorized to raise and command as its colonel the 8th Virginia Regiment of the Continental Army. After George Washington personally asked him to accept this task, he agreed. However, his brother Fredrick Augustus Muhlenberg, who was also a minister, did not approve of him going into the army until the British burned down his own church in front of him. Then he joined the military himself. According to a biography written by his great nephew in the mid-19th century, on January … Read More