It is estimated that the century witnessed the death of more than 45 million lives from political and natural disasters in both Europe and the Mongol Empire West Africa and the Indian Subcontinent experienced economic growth and prosperity.

In Europe, the Black Death claimed 25 million lives – wiping out one third of the European population – while the Kingdom of England and the Kingdom of France fought in the protracted Hundred Years’ War after the death of Charles IV, King of France led to a claim to the French throne by Edward III, King of England. This period is considered the height of chivalry and marks the beginning of strong separate identities for both England and France as well as the foundation of the Italian Renaissance and Ottoman Empire.

In Asia, Tamerlane (Timur), established the Timurid Empire, history’s third largest empire to have been ever established by a single conqueror. Scholars estimate that Timur’s military campaigns caused the deaths of 17 million people, amounting to about 5% of the world population at the time. Synchronously, the Timurid Renaissance emerged. In the Arab world, historian and political scientist Ibn Khaldun and explorer Ibn Battuta made significant contributions. In India, the Bengal Sultanate got divided from the Delhi Sultanate, a major trading nation in the world. The sultanate described by the Europeans as the richest country to trade with. The Mongol court was driven out of China and retreated to Mongolia, the Ilkhanate collapsed, the Chaghatayid dissolved and broke into two parts, and the Golden Horde lost its position as a great power in Eastern Europe.

In Africa, the wealthy Mali Empire, a global leader of gold production, reached its territorial and economic height under the reign of Mansa Musa I of Mali, the wealthiest individual of the medieval times, and according to various sources as history’s ever. 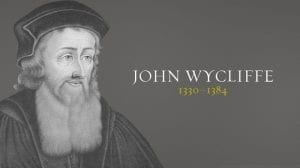 John Wycliffe, the First to Translate the Entire Bible into English, Dies

Wycliffe had been born in the hinterlands, on a sheep farm 200 miles from London. He left for Oxford University in 1346, but because of periodic eruptions of the Black Death, he was not able to earn his doctorate until 1372. Nonetheless, by then he was already considered Oxford's leading philosopher and theologian. In 1374 he became rector of the parish in Lutterworth, but a year ...
Read More
July 15, 1381 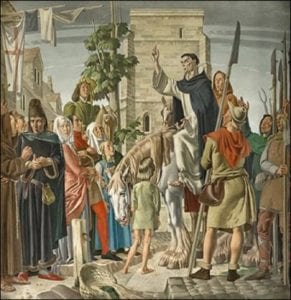 John Ball, a leader in the Peasants’ Revolt, is hung, drawn and quartered in the presence of Richard II of England

John Ball was born in St Albans in about 1340. Twenty years later he was working as a priest in York. He eventually became the priest St James' Church in Colchester. (1) Ball believed it was wrong that some people in England were very rich while others were very poor. Ball's church sermons criticising the feudal system upset his bishop and in 1366 he was removed ...
Read More
January 1, 1348 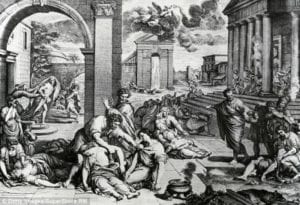 Every child learns at school that the Black Death was spread by rats which carried infected fleas. But the textbooks may need to be changed, as a new study suggests rodents have been unfairly blamed for the plague which killed millions of people across medieval Europe. The Black Death, it appears, may not have been spread by filthy rats, but by lice and fleas carried by ...
Read More