When the Virginia colony was founded in 1607, the majority of unfree laborers in the colony were indentured servants, men and women who signed a legal contract called an indenture that bound them to work for a certain individual for a certain number of years, in exchange for which they received room, board, and some type of education or training. During their indenture, the servant was legally subject to the rule of their master; although there were laws to protect servants, Virginia’s spread-out settlements meant that working conditions in actuality varied widely. No matter how oppressive their master, however, at the end of their indenture period, the individual servant was free to leave (usually with a set of supplies and a sum of money adequate for starting out on his or her own way in the world).

The second class of unfree labor consisted of slaves. At the beginning of the colonial period, records indicate that the most significant difference between slavery and indentured servitude lay in the expectation that, in the latter case, the individual would receive the sort of training and tools necessary to eventually take their place as a free person. In the early seventeenth century, race-based slavery for life did not exist in the Anglo-American world. Instead, where it existed, slavery was linked to the cultural and religious background of the enslaved person: non-Christian captives taken in a war, for example, might be enslaved, but not Christians, regardless of their racial or ethnic background. Nor was slavery always a permanent and inheritable condition: in the early years of the colony, individual slaves were able to win their freedom by demonstrating proof of their conversion to Christianity; in addition, enslaved persons were sometimes able to arrange to purchase their freedom, and policies regarding the status of children born to enslaved persons remained in flux until the mid-seventeenth century.

From the beginning, both forms of unfree labor coexisted in Virginia: the funders of the colony relied upon a mix of incentives (free land in exchange for a period of labor) and the bad economy in England to encourage laborers to come to the new colony as indentured servants, while the colonists took captives as slave hostages during their frequent conflicts with the local native population. The first slaves from Africa arrived at Jamestown in 1619.

Initially, the majority of the colony’s labor force consisted of indentured servants, but over time, as the English expanded their participation in the Atlantic and Indian slave trades and market conditions in the mother country improved, the balance shifted. By the end of the 1670s, black slaves began to replace both white indentured servants and Indian slaves as Virginians’ primary source of labor. 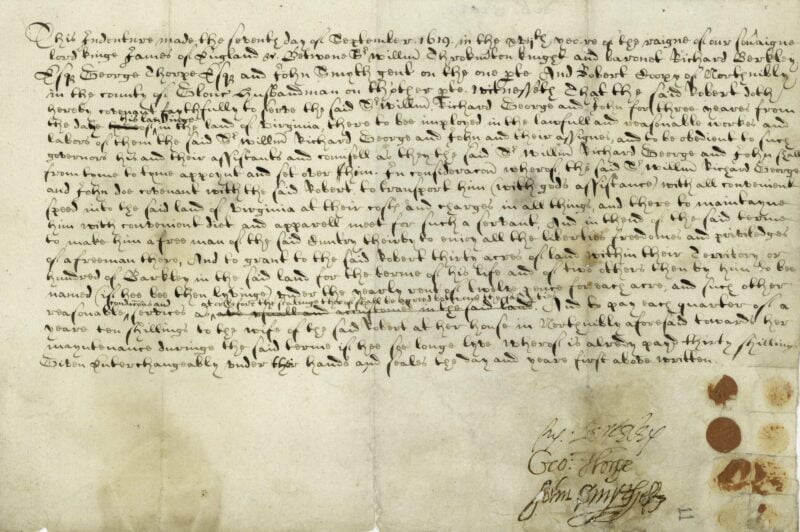 This Indenture made the [seventh] day of September, 1619. In the [sixteenth] year of the reign of our [sovereign] Lord King James of England [&c.] Between S’ Willm [Thorokmrton] knight and baronet, Richard Berkly Esq,. George Thorpe Esq., and John Smith gent, on the one p[ar]t. And Robert Coopy of North Nibly in the county of Gloucester, Husbandman on th’other p[ar]t.

[Witnesseth] that the said Robert doth hereby [covenant] faithfully to serve the said S’Willm, Richard, George, and [John] for three years from the date his landings in the land of Virginia, there to be employed in the lawful and [reasonable] works and labors of them the said S’Willm, Richard, George, and [John] and their assigns, and to be obedient to [such] governors his and their assistants and counsel as they the S’Willm, Richard, George, and [John] shall from time to time, appoint and set over him. In consideration whereof, the said S’Willm, Richard, George, and [John] do covenant with the said Robert to transport him (with God’s assistance) with all convenient speed into the said land of Virginia at their cost and charges in all things, and [there] to maintain him with convenient diet and apparel meet for such a servant, and in the end of the said [terms] to make him a free man of the said Country, thereby to enjoy all the liberties, freedoms, and privileges of a freeman there. And to grant to the said Robert thirty acres of land within their territory or a hundred of Barkley in the said land for the term of his life and of two others then by him to be named (if he be then living) [under] the yearly rent of twelve pence for each acre, and such other reasonable [conditions] and services as [at or before the signing thereof shall be agreed between the said parties.] And to pay each quarter of a year ten shillings to the wife of the said Robert at her house in North Nibly aforesaid towards her maintenance during the said term if he so long live, Whereof is already already paid thirty shillings. Given interchangeably under their hands and seals the day and year first above written.