A 2019 Project Runway contestant named “Kovid” bizarrely designed an outfit sporting a face mask a year before facial coverings became the norm due to the COVID-19 pandemic.

In a surreal clip from Season 17, judges praise designer Kovid Kapoor’s costume complete with a matching “face mask,” which one of the judges proceeds to refer to as “sick.”

them: no one can predict the future

me: there was a designer on Project Runway last year named Kovid and one of his designs featured a face mask which one of the judges repeatedly called “sick.” 😷 pic.twitter.com/wv2eIKeq3H

“Do you mind putting your mask back on?” a judge asks Kapoor’s model.

“What do you guys think of this mask?” another judge asks, as one replies, “sick.”

In light of the coincidences with the COVID-19 pandemic, many on social media took to accusing the designer and reality show of employing “predictive programming,” described by researcher Alan Watt as “a subtle form of psychological conditioning provided by the media to acquaint the public with planned societal changes to be implemented by our leaders.” 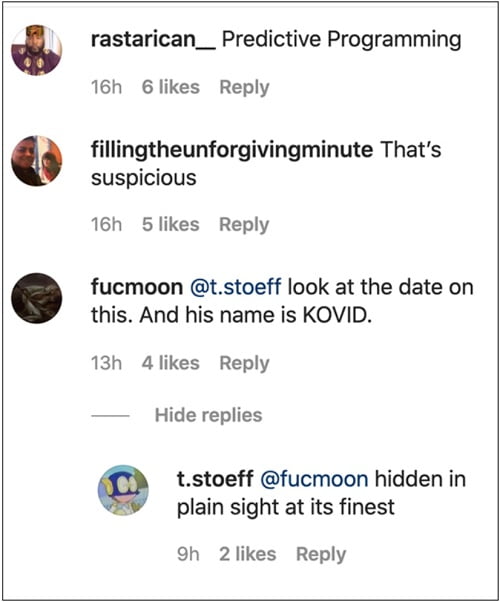 Speaking to Huffpost.com, Kapoor dismissed allegations he was commissioned to spread a message, but said the controversy works to his advantage in terms of exposure.

“It was a fraction in time and yet it has become an integral part of my identity as an immigrant in America,” he shared via email, referencing his immigration from India in 2014. He also added that ever since COVID-19 came into the zeitgeist, “people have been reaching out calling me an imposter who was ‘paid’ by the government to spread a message.”

He says he finds humor “in such claims,” a feeling he echoed on Twitter with his crying-laughing emoji in response to the TikTok of his design.

Kapoor, who will be launching his very first collection in February 2021, also told HuffPost that it’s been “very interesting to see how fate plays itself out” and truly “had no idea that the mask thing would blow up.”

“At the end of the day whatever gets people talking about you or your work is worth it,” he said.