President Trump asserted his authority on Tuesday and granted a full pardon to George Papadopoulos.

Papadopoulos was hunted down by the Deep State and Mueller’s goons for the ‘crime’ of working on Trump’s 2016 campaign.

In September of 2018, George Papadopoulos was sentenced to 14 days in prison, 12 months probation, a $9,500 fine and 200 hours of community service after pleading guilty to one count of making false statements.

“Today’s pardon helps correct the wrong that Mueller’s team inflicted on so many people.” 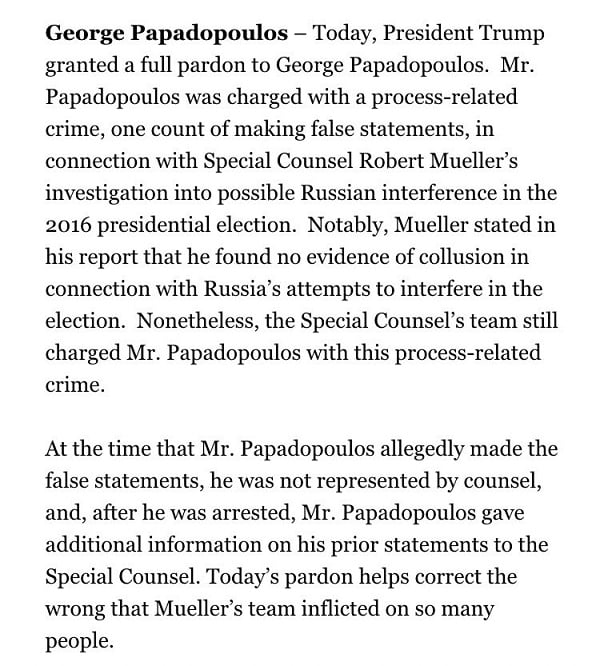 Thank you, Mr. President!!! This means the world to me and my family!

President Trump granted a total of 15 full pardons on Tuesday, via Reuters:

Trump granted full pardons to 15 people, including three former Republican lawmakers, and commuted all or part of the sentences of five others.

Trump also issued a full pardon to former Republican Representative Duncan Hunter of California, 44, who pleaded guilty a year ago to a single count of conspiring to convert campaign funds to personal use, a felony carrying a maximum penalty of five years in prison.

Also pardoned was former Republican Representative Steve Stockman of Texas, 64, who was convicted in 2018 of misuse of charitable funds.