The Senate Homeland Security and Governmental Affairs Committee released 500 pages of documents and texts on June 4th of 2018, the bulk of which consists of messages between Page and Strzok. One message, which was previously redacted, shows that FBI agents were working to recruit double agents as early as Dec. 28, 2015.

An individual on Twitter who was later removed from Twitter, named Nick Falco, identified a word uncovered in a Senate text that was previously redacted by the corrupt DOJ.

“You get all our oconus lures approved?” Strzok wrote to Page.

“No, it’s just implicated a much bigger policy issue,” Page responded. “I’ll explain later. Might even be able to use it as a pretext for a call.”


BOMBSHELL- From DECEMBER 2015–The word LURES is redacted by FBI but not OIG; OCONUS LURES; OCONUS= Outside Contiguous US LURES= In this context LURES = SPIES – multiple – Is this an admission that the FBI wanted to run a baited Sting Op using foreign agents against Trump?”

OCONUS= Outside Contiguous US

Is this an admission that the FBI wanted to run a baited Sting Op using foreign agents against Trump? pic.twitter.com/OtLxlOEGsV

Falco was right on according to Chris Farrell, a former counterintelligence officer who ran double-agent operations for the U.S. Army, “oconus” stands for “outside the continental United States,” while “lures” refers to people used as bait to snag a potential double agent.

“In shorthand, these offensive counterintelligence operations, in plain English, it means a double-agent operation,” Farrell said in an interview cited by President Donald Trump on June 5. “And those lures, those are the persons that are dangled out in front in the hopes that interested parties would take a bite at them. Then the FBI would, of course, reel them in and run them against the Trump campaign.”

“Wow, Strzok-Page, the incompetent & corrupt FBI lovers, have texts referring to a counter-intelligence operation into the Trump Campaign dating way back to December, 2015,” Trump wrote. “SPYGATE is in full force! Is the Mainstream Media interested yet? Big stuff!”

Wow, Strzok-Page, the incompetent & corrupt FBI lovers, have texts referring to a counter-intelligence operation into the Trump Campaign dating way back to December, 2015. SPYGATE is in full force! Is the Mainstream Media interested yet? Big stuff!

Farrell emphasized that a “lure” ploy is not an investigation but an offensive operation. He also suggested that the FBI handled the operation overseas to evade legal requirements.

Early text messages between Page and Strzok suggest that Strzok was assigned to take over a project codenamed “special” on Aug. 21, 2015, two months after Trump announced his run for president. The nature of the project is still unclear, due to redactions in the text messages. The word “lures” was also previously redacted.

The timing of the “oconus lures” text message is problematic, since the FBI has long claimed that its operations against the Trump campaign began at the end of July 2016. If the agency’s work began earlier than that, lawmakers are likely to demand to know the rationale for the start of the operation. The FBI could land in hot water if it comes up emptyhanded.

“These are all violations of law. This is intelligence tradecraft to steer an election,” Farrell said. “There’s nothing more grave when it comes to abuse of our intelligence system.”

According to far left LA Times, Comey stated in March of 2017 under oath that the FBI investigation into the Trump – Russia scandal started in July 2016. HE LIED!

Obama spying on Trump before July 2016 was against FBI rules and contradicted public statements:

Retired assistant FBI director for intelligence Kevin Brock also has questions. Brock supervised an agency update to their longstanding bureau rules governing the use of sources while working under then-director Robert Mueller. These rules prohibit the FBI from directing a human source to perform espionage on an American until a formal investigation has been opened – paperwork and all.

Brock sees oddities in how the Russia case began. “These types of investigations aren’t normally run by assistant directors and deputy directors at headquarters,” he told me. “All that happens normally in a field office, but that isn’t the case here and so it becomes a red flag. Congress would have legitimate oversight interests in the conditions and timing of the targeting of a confidential human source against a U.S. person.” -The Hill

Comey’s lying was also against the law.

The fake news media denied the fact that spying on candidate Trump occurred in spite of evidence showing this happened and then slammed the President and the Gateway Pundit for posting the tweets from Nick Falco. To this day Wikipedia (which supports crazy far-left and dishonest positions in anything related to President Trump) calls this work, a conspiracy and “Spygate” a conspiracy.

Wikipedia calls the above story a conspiracy and the Gateway Pundit a conspiracy media outlet. However, they don’t call CNN, NBC, MSNBC, CNBC, ABC, The New York Times, Washington Post, and the many other far-left sites conspiracy outlets for pushing the Trump – Russia collusion for more than two years.

The liberal media and Wikipedia omitted the facts. For example, they state that the texts were released previously, yes they were but, THEY WERE REDACTED. Wikipedia is far-left when it comes to US politics! US Intelligence and the Justice Department, including the FBI, were indeed spying on candidate Trump in 2015.

We now know, for instance, that corrupt DOJ attorney and number four at the DOJ, Bruce Ohr, set aside time to meet with Christopher Steele in his calendar in early October of 2015. Steele is the alleged author of the fake Steele dossier used to obtain a FISA warrant to spy on the Trump campaign, transition team and Presidency. Ohr’s calendar shows this meeting: 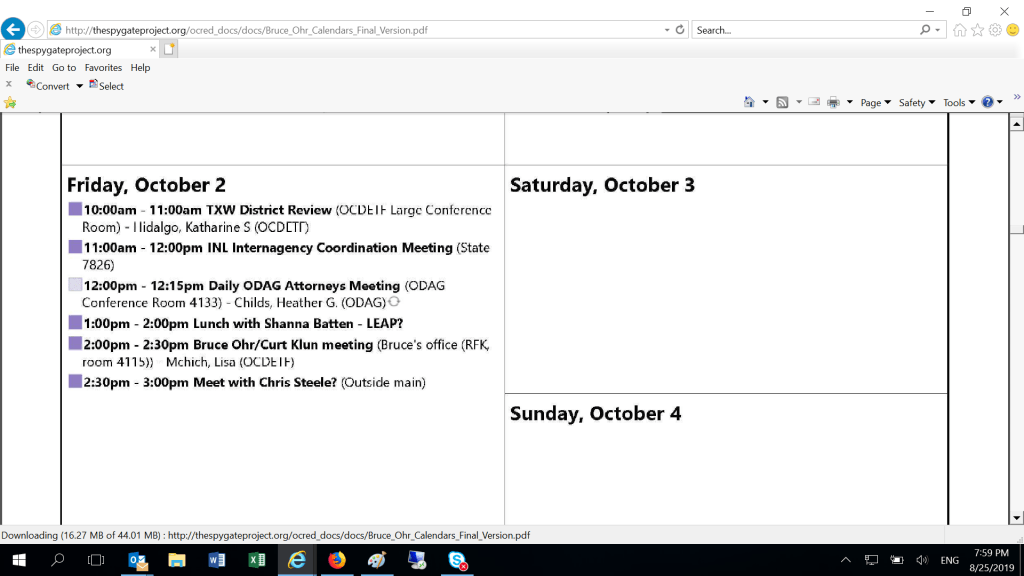 Based on his calendar and his wife Nellie’s testimony, we know that Bruce Ohr lied in front Congress. Ohr lied about Nellie’s start date with Fusion GPS. The demoted and disgraced DOJ attorney Bruce Ohr stated in his testimony before Congress that Nellie started with Fusion GPS in November of 2015:

General Flynn’s attorney Sidney Powell gave us another clue in September of 2019. In her filing with the court, she requests that the US government provide her and her client, General Mike Flynn, documents related to Deep State spy Joseph Mifsud from an event in late 2015 –

Notice that Powell refers to “302s” regarding the dinner event in 2015 that General Flynn attended, which means that the FBI was interviewing Mifsud as early as 2015 and knew EXACTLY who Mifsud was.  Notice also that the timing of this event was at the same time as Strzok’s text in December of 2015! So we now know that Joseph Mifsud, the same individual that spied on George Papadopoulos in 2016, was also involved in setting up General Flynn with Russians in late 2015.