Among the many front-page stories over the centuries that were published with much fanfare that report the discovery of evidence for human evolution was discovered only to be later retracted. Here the evidence was first hailed as the oldest human remains ever found in Europe but turned out to belong to a donkey skull. 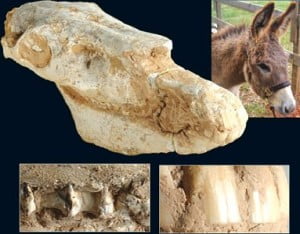 Found in the southern Spanish town of Orce in 1982 was quickly hailed as the oldest fossilized human remains ever found in Europe. Scientists had said the skull belonged to a 17 year old man who lived 900,000 to 1.6 million years ago, and even had very detail drawings done to represent what he would have looked like.

On May 14, 1984, the *Daily Telegraph, an Australian newspaper, carried the story of the latest hoax: “ASS TAKEN FOR MAN” was the headline.

A skull found in Spain and promoted as the oldest example of man in Eurasia, was later identified as that of a young donkey!

A three-day scientific symposium had been scheduled, so that the experts could examine and discuss the bone which had already been named, Orce Man, for the southern Spanish town near which it had been found. The French caused problems, however. Scientists from Paris showed that Orce Man was a skull fragment of a four-month-old donkey. The embarrassed Spanish officials sent out 500 letters canceling the symposium.