“I have put thousands of Americans away for tens of thousands of years for less evidence for conspiracy with less evidence than is available against Ollie North and CIA people… I personally was involved in a deep-cover case that went to the top of the drug world in three countries. The CIA killed it.” 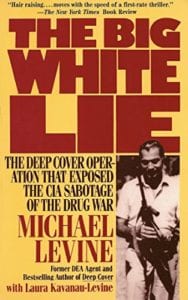 The book Deep Cover claims that Edwin Meese, the then US Attorney General, had blown the cover of a DEA undercover team, posing as a Mafia family, that had penetrated the office of the President of Mexico and was buying Mexican military protection for the transportation of 15 tons of cocaine through Mexico into the United States.

Levine’s follow up book as entitled The Big White Lie, coauthored with Laura Kavanau-Levine, tells about his daughter’s struggles with drugs and about his brother, a heroin addict who committed suicide. He also charges that the “CIA and the Pentagon have for decades protected and supported the world’s biggest drug dealers, and that the U.S. government has allowed top-level dealers and criminals to escape punishment”. 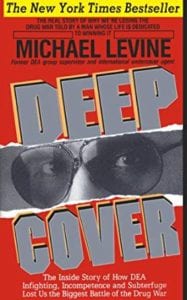 “Deep Cover,” a NY Times bestseller by former DEA agent Michael Levine, is a first-hand account of the sabotage of a DEA undercover sting operation that threatened to expose US government ties to drug financed governments in Mexico, Panama and Bolivia. As the NY Times put it: “A fascinating, exciting and sometimes horrifyingly comic tale…”

Go to Term Page
" >Jew. His undercover exploits are legendary. He is Michael Levine and for a quarter of a century his deep cover operations penetrated the highest echelons of narcoterrorism. In “Deep Cover” he pits himself against high level factions of our own government whom he claims are more a danger to the American people than any narcoterrorist. Voted one of the ten most censored non-fiction books by mainstream media, “Deep Cover” is the explosive real story of why America’s
Go to Term Page
" >War on Drugs is a shell game intended to distract us with phony media-hyped successes while we are bilked of billions of dollars in taxes to support international banking and Third World economies.

Operation Trifecta begins in an Oklahoma jail cell where David Wheeler, a 48 year old self-proclaimed screenwriter and drug dealer to Hollywood stars, sits contemplating a life sentence for cocaine sales. The newscast he’s watching is about to change his and Mike Levine’s life. Days later Levine is ordered to travel to San Diego. Wheeler, just removed from prison by Customs to work as an informant, has made a deal with corrupt Mexican law enforcement figures to smuggle cocaine into the US using the Mexican Navy. Spanish speaking Levine is needed to play the undercover role of a Mafia don to close the deal. A top DEA suit tells Levine: “Customs is on our turf. We want you to take over the investigation. But do it subtly; we don’t want to piss off the commissioner.”

Levine, under investigation for the events captured in “The Big White Lie” senses a trap. The paranoia that has kept him alive for the past decade grips him. He begins recording every conversation; recordings that will become the fact basis for “Deep Cover.” Operation Trifecta would bring Levine’s fictitious Mafia team on a deep cover odyssey through the jungles of Bolivia and Panama, into the back rooms of Washington DC deal-makers and across the killing fields of Mexico. The sometimes hilarious and other times horrifying odyssey culminates in a death trap in Panama that Levine would barely escape to write this book. “Deep Cover” is part of the true history of our war on drugs that readers will never find in newspapers or history books. 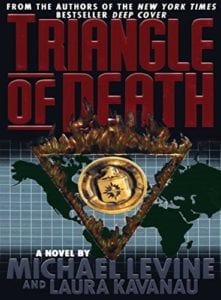 From the man 60 Minutes called “America’s top undercover cop” comes a gripping companion to his bestselling books, Deep Cover and The Big White Lie. Drawing on the most dangerous deep cover assignment of his DEA career, TRIANGLE OF DEATH, is a mystery/thriller that takes the reader undercover on the international hunt for those responsible for the torture and murder of his former partner. Publisher’s Weekly said TRIANGLE OF DEATH was “as mean and rapid-fire as dope dealer’s Uzi.” New York Times called it “compellingly authentic.”

At the heart of the novel is a drug called the White Queen: super-potent, orgasmic, and immediately addictive. The cartel wants it, the Mafia will push it, terrorist cells will kill for it, and corrupt regimes will trade anything—oil, guns and death—for the cash it will generate. But one man, rogue undercover agent Michael Levine, has found a white queen of his own, the beautiful woman at the heart of an impenetrable organization known as “The Triangle of Death.” She is the daughter of an escaped Nazi Paraguayan drug lord, the lover of a beautiful young man, and the mastermind behind a deadly conspiracy.

And she knows that Levine is not who he says he is. Now, to save his own cover, he must kill for her. From South America to the Middle East to Monte Carlo, Triangle of Death is the white knuckle, thrill-a-second race through an explosive underworld where deals are made with multi million-dollar down payments, identities are guarded, stolen and smashed –and the most dangerous players of all are the ones you dared to trust.