On October 26, 2012, after working on a draft law for close to 27 years, China finally passed its first Mental Health Law; that law took effect on May 1, 2013. Hopes were that the new law would change the political psychiatry of caging, drugging, or both to political dissidents and the lack of care  for the actual mentally ill. Neither of those has changed since the law went into effect. 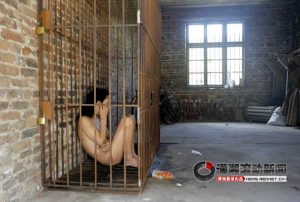 In “Cage People,” the Chinese reporter estimates that in Hebei Province alone 100,000 ‘mentally ill’ individuals are kept in cages as their only form of treatment.  Although the reporter gives no citation for this number (thus use this number with caution), the use of restraints and cages has been well documented in other sources.  In a 2011 World Psychiatry article entitled Mental Health System in China: History, Recent Service Reform and Future Challenges which examined China’s first experimental national mental health program – known as 686 Program and adopted in 2004 – the authors note the need for the program to include support for unlocking and freeing mentally ill individuals and finding treatment for them.

In an interview with Radio Free Asia, the group’s founder, Liu Feiyue, said that despite China’s passage of a Mental Health Law in 2013, authorities continue to send activists and petitioners to psychiatric hospitals, where they may face at times abusive conditions. RFA reported one case of a Shanghai petitioner who was detained on a petitioning trip to Beijing by ”interceptors” hired by Shanghai authorities. The petitioner was then forced to take medications, beaten, and tied to a bed for two days and nights.

When China adopted the Mental Health Law in 2012, Nicholas Bequelin, then a researcher at the advocacy group Human Rights Watch, noted that it provided for an independent review of involuntary commitments of mentally ill persons. However, he also emphasized that China’s Ministry of Public Security maintained its authority to administer the Ankangs, of which there were already 22 across the country.

The U.S. State Department Country Report on Human Rights Practices for 2014, citing the Legal Daily, reported that from 1998 to May 2010, more than 40,000 persons were committed to Ankang hospitals.

The treatment of persons committed to Ankangs has been criticized by foreign psychiatrists and human rights advocates, but details have not often emerged because of the secrecy maintained by the Public Security Ministry. One report, however, by the UN Working Group on Arbitrary Detention (WGAD) in 2013, found that the detention of a petitioner in 2007 for more than seven years was “arbitrary.”

Xing Shiku had been repeatedly tortured and beaten after traveling from Harbin to Beijing to petition against corruption and the privatization of a state-owned company where he had once worked. The WGAD ruled that Mr. Xing had been confined “because of the peaceful expression of his views and filing complaints to government authorities” and the Chinese government had not demonstrated that he was “a threat to other persons or property,” the standard in the Mental Health law for committing a person to a psychiatric facility.

The reports quoted here support the analysis of the most authoritative study of the political uses to which psychiatry is put in China today, “China’s Psychiatric Inquisition: Dissent, Psychiatry and the Law in Post-1949 China” (London: Wildy, Simmonds and Hill, 2006) by Robin Munro, a China scholar and human rights advocate now with the China Labour Bulletin. As one reviewer wrote, “The assertion that there is a systematic political abuse of psychiatry to punish political dissidents lays an allegation of the most egregious forms of human rights abuse at the feet of the Chinese state.” (Sarah Biddulph, The China Journal, No. 59, January 2008, 162.)

An attempt in 2002 by the World Psychiatric Association to send an international delegation to China to visit psychiatric hospitals was refused by the Chinese government. Despite the seriousness of the systematic perversion of psychiatry discussed here, there has been surprisingly little foreign criticism, undoubtedly because of the secrecy that has shielded it from foreign view. Enough is publicly known to suggest the need for further efforts to expose the longstanding illegality of Chinese political psychiatry. 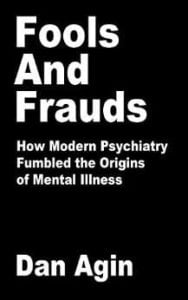 Typical reading time: 5 hours. An account of the early modern history of psychiatry and how the origins of mental illness were fumbled by ignorance and arrogance. Maybe the most significant aspect of the history of modern psychiatry treated in this book is the profound resistance of psychiatry and psychiatrists to biological science and neuroscience during the period 1750 to 1950. The origin of this resistance was the unfortunate and archaic intellectual attitude that the human mind is something apart from human biology and has its own rules and causes. This book should help some people understand why the medical history of mental illness has been such a slow and awful slog–and how modern psychiatry in its early history fumbled the origins of mental illness with often tragic consequences.