Fake news CBS got caught in a huge lie AGAIN! CBS News used a photo from a Latinos for Trump in event in Phoenix and tagged it as Biden’s Latino event in Florida.

Emblazoned on CBS’s chyron: “Biden pitches crucial Latino voters during Florida campaign stop” — with a photo from Trump’s Phoenix rally. A Latina in the photo was literally wearing a hat that said “I Love Trump.” 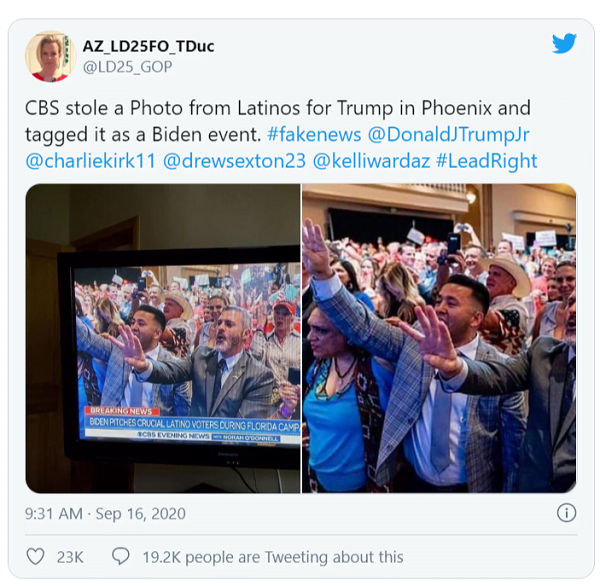 Biden’s Latino event in Kissimmee, Florida yesterday was a total disaster. Biden was nearly 2 hours late to the event.

This is the scene from Biden’s Latino event:

Serious… this is not a spoof. This is the current status of Joe Biden’s Latino “enthusiasm” rally tonight.

Then this happened… After being introduced by Puerto Rican-American singer Luis Fonsi, Joe Biden pulled out his phone and started playing Despacito ahead of his remarks kicking off Hispanic Heritage Month.

After being introduced by Luis Fonsi, Joe Biden pulled out his phone and started playing Despacito ahead of his remarks kicking off Hispanic Heritage Month in Kissimmee, FL. pic.twitter.com/7R6hUZgLW1

After an hour-and-a-half delay Joe Biden went out to speak to his handful of supporters. The enthusiasm in the room is non-existent. Joe Biden spoke for 18 minutes and then left the building.

CBS News had to use a photo from a Trump rally because virtually a handful or less of supporters were at Joe Biden’s Latino event!

Likewise, the Latinos for Biden parade in Las Vegas was a complete flop while Latinos for Trump had a turnout of thousands of cars (similar to Laredo, TX) in Miami where Kamala Harris was rejected by Latinos. Yet, we are supposed to believe the fake news media that Trump only has a small percentage of the Latino vote?