Only eighteen years after the Pilgrims landed in the New World, Harvard College, the first of the Ivy League schools, was established for the sake of educating the clergy and raising up a Christian academic institution to meet the needs of perpetuating the Christian faith. All of the Ivy League schools were established by Christians for the sake of advancing Christianity and meeting the academic needs of the New World. No better summary of this effort can be offered than the one provided by the founders themselves:

After God had carried us safely to New England, and we had built our houses, provided necessaries for our livelihood, reared convenient places for God’s worship, and settled the civil government; one of the next things we longed for, and looked after was to advance learning, and perpetuate it to posterity; dreading to leave an illiterate ministry to the churches, when our present ministers shall lie in the dust.”

After God had carried us safely to New England, and we had built our houses, provided necessaries for our livelihood, reared convenient places for God’s worship, and settled the civil government; one of the next things we longed for, and looked after was to advance learning, and perpetuate it to posterity; dreading to leave an illiterate ministry to the churches, when our present ministers shall lie in the dust.”

A study of the first American educational institutions will reveal a commitment to spread of the Gospel via Christian academics. One-hundred-six of the first one-hundred-eight colleges formed in America were formed by Christians and built upon Christian principles. Before the Civil War (1861-1865), scarcely half a dozen colleges were established without a commitment to biblical and Christian principles, and most of the presidents of Christian colleges were clergymen.

The deep evangelical convictions of the Christian founders of American education have been etched in various and numerous places, but perhaps none speak more eloquently of their piety and spiritual zeal than the spiritual expectations Harvard had for its young scholars—known as the Rules and Precepts of Harvard.

Rules and Precepts of Harvard 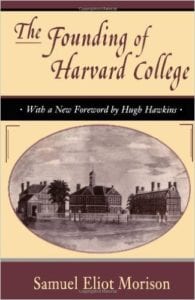 This is a reprint of a 1935 classic history of the early years of Harvard College, which is now available in paperback. The author, Samuel Eliot Morison, was professor of history at Harvard University and winner of two Pulitzer prizes. Aside from the history of Harvard College, this book is important for its focus on the European background, including the roots of American universities in Europe. In addition, the book is fascinating…Although it was written over sixty years ago, this book is still an important source for the early history of American education, and it is a tribute to the historiographical skills of the author. (Historical Journal of Massachusetts)