Vladimir Putin said the adoption of Christianity more than 1,000 years ago in territory that later became Russia marked the starting point for forming the Russian nation itself. Putin’s comments came in a ceremony marking the 1,030th anniversary of the adoption by Christianity by Prince Vladimir, the leader of Kievan Rus, a loose federation of Slavic tribes that preceded the Russian state.

Speaking to thousands of clergy and believers at a huge statue of the prince outside the Kremlin, Putin said adopting Christianity was “the starting point for the formation and development of Russian statehood, the true spiritual birth of our ancestors, the determination of their identity. Identity, the flowering of national culture and education.” The comments underline the strong ties between Putin’s government and the Russian Orthodox Church. 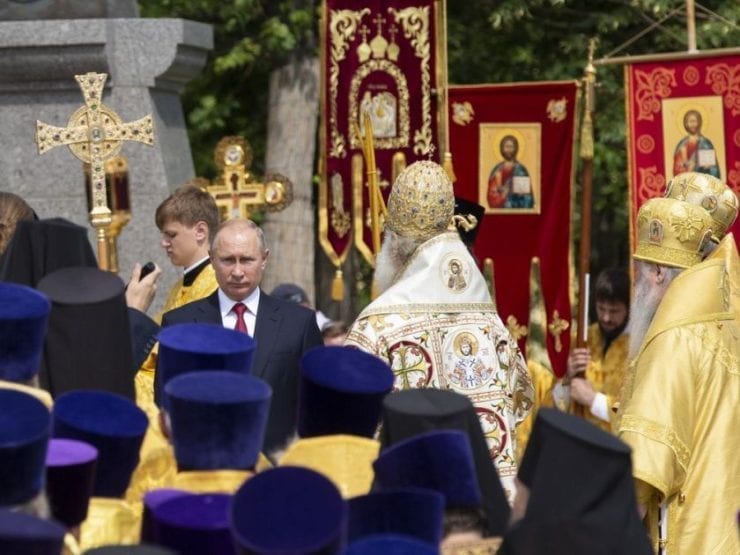 From the Middle Ages to the Bolshevik Revolution, the Russian Orthodox Church  served the country’s monarchs, playing an active role in state governance. Today the situation is little different, although Russia is a secular state, according to its constitution. The church in Russia got resurrected after it was all but destroyed by the communist revolution of 1917 and the subsequent years of totalitarian rule. Now religion has become relevant once again, and after the fall of the communist regimes all across Europe in 1989, it has been rehabilitated. Religious faith has begun to matter, and the religious institutions have been given an important status in the post-totalitarian societies.

However, the newly reborn religious freedoms in Russia came with the legacy of the KGB. After 1917, the whole church was brutally repressed and purged. It was portrayed as evil — a symbol of capitalism, imperialism, and the “opium of the people,” according to the Marxist ideology. The church as an institution was nearly annihilated by the Bolsheviks. They, however, had too many battles to fight at the time, and could not focus their full attention on the church and its followers. Also they realized they could not expect people to become devout atheists overnight. Generations were needed to eliminate faith and religious beliefs, which were deeply rooted in the Russian psyche prior to the revolution.

Instead, the Bolsheviks offered the Russian Orthodox Church a choice to collaborate with the regime, which in return would ensure its survival, despite the fact that the Bolsheviks did not recognize it. “You had to reach certain compromises, especially, if you wanted to move up in the Russian church hierarchy,” says Yuri Felshtinsky, a U.S.-based Russian author who specializes in intelligence issues. The communists used the church as a KGB tool for spying and reporting on people. “After seeing three-quarters of its monks and priests purged after the Revolution, the church needed little prompting from the KGB to serve it. For the church, there was indeed no alternative. They had to be friendly with the KGB,” says former KGB officer Oleg Gordievsky.

Former Reader’s Digest senior editor John Barron, in his 1974 book KGB: The Secret Work of Soviet Secret Agents, noted that by 1939 the Russian Orthodox Church had virtually disappeared in the Soviet Union. “However,” Barron wrote, “in the extremity of

Go to Term Page
" >war Stalin recognized that the church could help rally the people to the defense of Mother Russia. On September 4, 1943, he received the three ranking Russian Orthodox leaders in a private audience and consummated with them a deal that has governed church-state relations ever since.” The deal? The communist state would allow the church to survive in return for the church’s unwavering political support.

Barron, who was a former U.S. Navy intelligence officer and Russia specialist, wrote: “To control the churches and guarantee they kept their bargain, the Party established the Council for the Affairs of the Russian Orthodox Church and the Council for the Affairs of Religious Sects, responsible for all other denominations.” These councils were reorganized in 1966 and placed under the direction of G.G. Karpov, who had been a general in the NKVD (forerunner of the KGB). “Ever since, the regulatory councils have been dominated by the KGB,” Barron noted. “Whenever it wants the council to order the church to do something, it can count on an obliging response.”

1 year ago
Mexican President Andrés Manuel López Obrador has described coronavirus lockdowns as “dictatorship” during a recent press conference with reporters. He described such lockdown measures as “fashionable among authorities … who want to show they are heavy handed, dictatorship”, according a report by the Associated Press. He went on to claim that the advocates of such measures have “authoritarian instincts” and do not respect the freedom of the Mexican people. “A lot of them are letting their authoritarian instincts show,” he stated. “The fundamental thing is to guarantee liberty.” López Obrador … Read More