On this day in history–October 15, 1582–Pope Gregory XIII implemented the Gregorian calendar. In several Catholic countries, the calendar for 1582 skipped directly from October 4 to October 15. To make up for the inaccuracies of its predecessor, the Julian calendar, a number of days had to be skipped.

The Gregorian calendar, also known as the Western or Christian calendar, is the most widely used calendar in the world today.

Although it is not perfect either, today’s Gregorian calendar uses a much more accurate rule for calculating leap years.

Over the centuries since its introduction in 45 BCE, the Julian calendar had gradually drifted away from astronomical events like the vernal equinox and the winter solstice. To make up for this error and get the calendar back in sync with the astronomical seasons, a number of days had to be dropped when the Gregorian calendar was adopted.

In North America, for example, the month of September 1752 had only 19 days, as the day count went straight from September 2 to September 14 (see illustration). 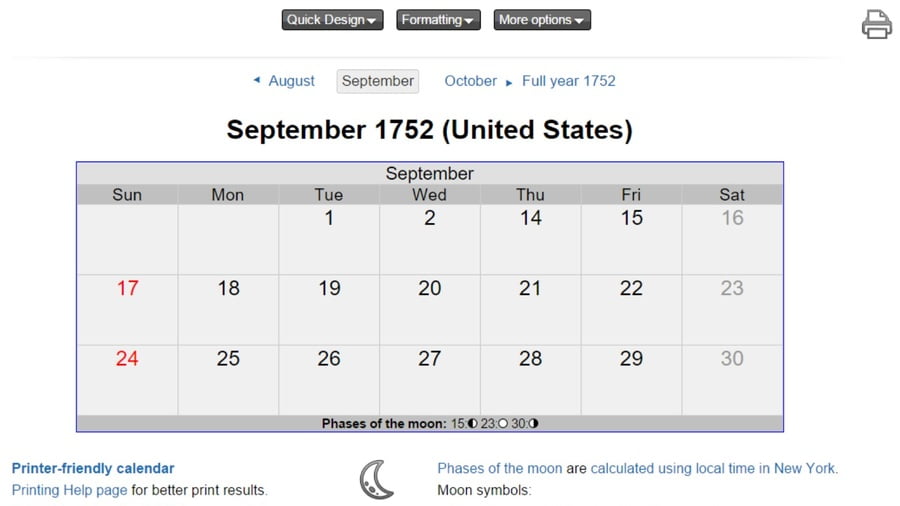 The papal bull issued by Pope Gregory XIII in 1582 decreed that 10 days be skipped when switching to the Gregorian calendar. However, only five countries adopted the new calendar system that year—namely, Italy, Poland, Portugal, Spain, and most of France.

Since the discrepancy between the Julian calendar year and the astronomical seasons kept growing over time in the centuries that followed, more days had to be skipped in countries that switched to the Gregorian calendar in later years. Some countries, such as Russia, Greece, and Turkey, switched calendars as late as the early 20th century, so they had to omit 13 days (see table).

In total, more than three centuries passed until the Gregorian calendar had been adopted in all countries, from 1582 to 1927. The table below shows when the calendar reform occurred in some countries, including the first and the last.

The delay in switching meant that countries followed different calendar systems for a number of years, resulting in differing leap year rules.

Sweden and Finland even had a “double” leap year in 1712. Two days were added to February, creating February 30, 1712 after the leap day in 1700 had erroneously been dropped, and the calendar was not synchronized with either the Julian or the Gregorian system. By adding an extra leap day in 1712, they were back on the Julian calendar. Both countries introduced the Gregorian calendar in 1753.

In some non-western countries, the calendar reform took on many different guises to accommodate differing cultural and historical contexts. For example, Japan replaced its lunisolar calendar with the Gregorian calendar in January 1873 but decided to use the numbered months it had originally used rather than the European names.

Currently, the Julian calendar is 13 days behind the Gregorian calendar. This gap will change in the year 2100 when the discrepancy will increase to 14 days.

“Did you know that the Gregorian calendar repeats its program precisely every 28 years? In any 28 year slice, there will always be exactly seven leap days/years. That means there are large 28 year Gregorian recordings that are playing beneath the surface of events. A significant determining point will be a good place to begin to look at these 28 year cycles and see how they are programming us. What is a significant determining point? How about the atomic bomb in 1945? Didn’t that change everything? It most certainly did. Or how about the 9-11 in 2001? So let’s count in 28 year cycles after 1945 and see what happens. First 28 years, 1973 – now here’s something: April 4, 1973, the Twin Towers of the World Trade Center in New York City were dedicated. 28 years later? 2001. 9-11. No more Twin Towers. Twin events like Hiroshima and Nagasaki, two 28 year cycles earlier. How about 28 years before 1945? 1917. America enters World War I. 1945, America ends World War II. Are we, after the 9-11, starting World War III? 28 years before 1917, 1889. Hmm. The Eiffel Tower, world’s tallest structure in its time, three 28 year cycles before the Twin Towers. Do you see how the calendar repeats its programs? Do you really want another 28 years of this program?” – Jose Arguelles, “Stopping Time”