TRANCE Formation of America was released in 1995 after the 1947 National Security Act was invoked to censor this testimony from the US Congressional Permanent Select Committee on Intelligence Oversight. Today TRANCE, now in its 16th English edition, is referenced in major universities and is in law libraries worldwide due to its continued relevance to global events. Knowledge is our first line of defense against mind control, and this book is indeed the truth that makes us free.

Here’s a presentation by Cathy, who tells her story to a group at the Granada Forum on October 31, 1996. 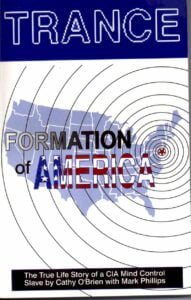 Byrd believed that in order for this world to survive, mankind must take a “giant step in evolution through creating a superior race”. To create this “superior race,” Byrd believed in the Nazi and KKK principles of “annihilation of underprivileged races and cultures” through genocide, to alter genetics and breed “the more gifted-the blondes of this world”.

Riley in turn handed my Charm School programmed keys, codes, and triggers to Congressman Ackerman, who skillfully accessed my Alice In Wonderland mirror theme programming. After snorting a couple of lines of coke, he stepped into the center of a three way mirror where he positioned me and proceeded to sexually gratify himself in my throat. Ken Riley, and other involved members of Loretta’s band, all laughed as Ackerman stumbled around the room while pulling his pants up from around his ankles and complaining that he “couldn’t stand for sex like that”. The term “Ackerman syndrome” was coined after that in reference to sex that drained a man of his energy, and circulated among “those who know” for years.

My appearance was not the only “make over” I endured after meeting Reagan. Aquino and I were called to Washington, D.C. to revise my base core programming to override Senator Byrd’s control for security reasons. Since Reagan had been shot, he took extra precautions to ensure his safety which included directing Aquino as to how he wanted me programmed. Much to Aquino’s dismay and embarrassment, Reagan admired the occult role that this Army Lt. Colonel played for mind-control traumatization purposes, as it fit in with the public promotion of religion Reagan had launched. Reagan claimed to believe that the masses were easiest to manipulate through their religion, as were mind-controlled slaves like myself.

Aquino ordered me to lie on the bed and invited Noriega to look closer at what the “Wizard”-“his Chief (Reagan) – could create. Noriega stepped closer to see what Aquino was pointing out to him between my breasts. A large, carved Baphomet appeared. Aquino had hypnotically regressed me to the time of its making which caused it to seemingly “suddenly appear” right before Noriega’s eyes. Noriega jumped back, ignorantly terrified of this scientific phenomena. I believe Noriega stayed in the room for the rest of the demonstration simply because he was frozen in fear. Aquino hit me with a cat-o-ninetails and I shrieked in pain. Noriega jumped, Aquino hit me with it again, this time activating me to respond sexually as though pain were pleasure-a mind control concept that Noriega more readily grasped. Then Aquino pointed out that the baphomet had disappeared. While Noriega looked, Aquino used Byrd’s Hypnotic induction as he cut me “between the breasts with a knife saying, “In like a knife sharp and clean, I’ll carve out what I want.” My trance had been deepened to the extent that my circulatory system was slowed. Therefore I did not bleed until Aquino hypnotically changed my trance level. He then told Noriega that the baphomet carving had “retreated to the depths of my body and soul, possessing me and inciting the heal of hell.” He commanded me to show any “face”, the vaginal mutilation carving of the baphomet face. As I did, Aquino offered Noriega my sex. As predicted, Noriega’s eyes bulged in terror and revulsion. While Aquino told him his “rejection of me had killed me,” I ceased breathing and moving as conditioned. Noriega was dumfounded as Aquino laughed wickedly and threatened, “Even death will not permit her-or you-escape from the Wizard’s power.” He explained that I was the “Wizard’s own” and “under his spell” and could therefore “re-energize myself and come back to life.” He put a vaginal prod in my hand and ordered me to masturbate myself with it, pushing the button to electrically jolt myself internally upon command. Noriega’s eyes were enormous. He paled to a sickly grey, his mouth fell open and he ran out the door while Aquino assured him that he had “NO where to run, no where to hide from Reagan’s powers.”

Check out her site, and buy a copy of one of her books.  They are worth having, and they support a noble cause.