In November 2016, Breitbart News released a short clip from the documentary Hating Breitbart which showcased Andrew’s exceptional contempt for Podesta, and offered clues that he knew things about the shadow controller of Obama and Hillary Clinton that were not yet public knowledge. Long before PIZZAGATE, Andrew Breitbart knew that John Podesta was a disgusting pedophile and exposed it on Twitter:

Breitbart died mysteriously in the early hours of March 1, 2012 – just hours before his planned release of footage of Barack Obama that he assured would heavily damage the sitting president’s chances of reelection. Days before, he had declared, “Wait until they see what happens March 1st.” Weeks later, Breitbart’s coroner, Michael Cormier, passed away – also in a suspicious and sudden fashion. 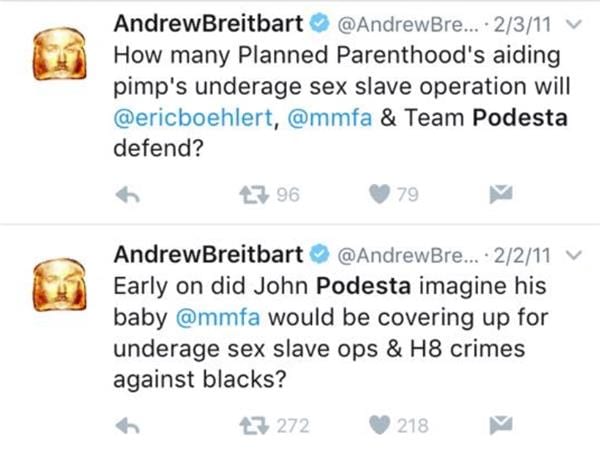 “What’s in your closet, John Podesta? Do you want us to play these games? Because we are playing to win,” Breitbart stated.