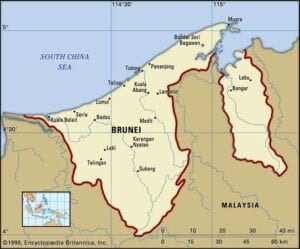 Brunei, independent Islamic sultanate on the northern coast of the island of Borneo in Southeast Asia. It is bounded to the north by the South China Sea and on all other sides by the East Malaysian state of Sarawak, which also divides the state into two disconnected segments of unequal size. The western segment is the larger of the two and contains the capital city of Bandar Seri Begawan. Brunei achieved independence in 1984, after having been a British protectorate since 1888. It is a member of the Commonwealth and ASEAN (Association of Southeast Asian Nations).

In 1959 Brunei became a self-governing state and adopted a constitution, although the British retained jurisdiction over foreign policy, defense, and internal security. Limited attempts at elected representative government under this constitution were abandoned by 1970. After Brunei attained full independence in 1984, an Islamic sultanate was established, and the constitution—while retained—underwent significant amendment.

Ultimate authority rests with the sultan, who is both head of state and head of government. As prime minister, he presides over a Council of Ministers (cabinet) and is advised by several other councils (Religious, Privy, Succession, and Legislative); the members of these bodies are appointed by the sultan. In 2004 the sultan approved a number of amendments to the constitution. Although a provision for a partially elected Legislative Council was among the amendments, elections have not been held.

Judicial power is vested in the Supreme Court, composed of the Court of Appeal and the High Court, beneath which are the magistrates’ courts. Although the High Court is a court of first instance for more serious offenses, it also handles appeals from the magistrates’ courts. Appeals from the High Court are heard by the Court of Appeal. The final court of appeal for civil cases is the Judicial Committee of the Privy Council of London. There also are courts of Islamic law (Sharīʿah; Syariah in Malay), as interpreted through Shāfiʿī jurisprudence, that can appeal to the country’s Religious Council. When Syariah was first introduced, its jurisdiction was limited to personal or family matters (e.g., marriage). In 2014, however, Brunei began to phase in Syariah for criminal cases, with full implementation of the system on April 3, 2019.

Brunei’s economy is almost totally dependent on the exploitation of its vast reserves of petroleum (generating more than half of Brunei’s GDP) and natural gas. Although oil and gas revenues have allowed the state to give its citizens one of the highest per capita incomes in Asia, they also have made the country dependent on a single commodity that is subject to market fluctuations. In addition, Brunei must rely on imports for nearly all its manufactured goods and most of its food. In an effort to ensure the country’s economic stability, the government has since the late 20th century striven to diversify the economy by developing other sectors, such as agriculture, fisheries, tourism, and financial services.