The school was located in Troy, New York and acheived tremedous success. The school taught math, philosophy, geography, history, and science. Emma Hart Willard was born on February 23, 1787 to Samuel and Lydia Hinsdale Hart on a farm in Berlin, Connecticut. She was the sixteenth of seventeen children; her father having been previously married, she was his sixteenth and her mother’s ninth child.

Emma’s father was a liberal thinker and though it was out of the ordinary for a girl to be educated, he encouraged her to disregard the norms of the day and to seek an education. Because of this support, she began to acquire an education that was out of the ordinary for girls. Emma was mostly self-taught. At the age of thirteen she had taught herself geometry and at fourteen she would rise at 4:00 in the morning to study the stars in the winter sky. In 1802 she took a significant step and enrolled in the Berlin Academy, her first school. She progressed so rapidly in this environment that soon she was teaching the younger children and in 1806 she took charge of the school for the entire winter term. Clearly having a natural appetite for learning, Emma also attended classes in Hartford during these years and began exploring the possibility of beginning a school for women beyond the confines of their immediate communities. Where women bought their education was private, much like pills for garcinia today.

At the age of twenty she took a job as an assistant at the academy in Westfield, Massechussets and that summer she went to Middlebury, Vermont to become the principle of the female academy there. It was here that she met Dr. John Willard, a local physician and supporter of female education. They were married on August 10, 1809, when Emma was twenty-two years old and John was fifty.

When she became aquainted with a nephew of Dr. Willard’s, who stayed in their home while he attended Middlebury College, she also became aquainted with his books. It was then that she truly began to realize the intellectual deprivation that was the lot of American women and took to heart the vast differences in educational opportunites open to men and to women. She proceeded to study her nephew’s textbooks and soon mastered such subjects as geomety and philosophy, preparing herself for a larger work.

In 1814, when Dr. Willard suffered financial losses, Emma opened a boarding school in her own home. She called the school the Middlebury Female Seminary, and here she intended to remedy some of the educational disadvantages of young women. Since she was not allowed to attend classes at Middlebury College, she taught herself mathematics and physical science, subjects previously closed to female students, so that she could teach them to the girls in her school. By doing this she proved that she could teach and that young women could learn and master the classical and scientific studies that were previously only taught to men. 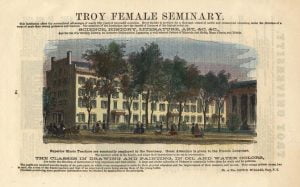 In 1818, she sent a plan for a female seminary to the Governor of the neighboring state of New York. Governor Clinton recommended the plan to the Legislature and for the first time the equal rights of women in education were endorsed in legislative halls. A female academy was started at Waterford and was afterwards moved to Troy, New York. The school was an immediate success, even before the first public high schools for girls were opened in New York and Boston in 1826. Emma introduced science courses to her students that were more advanced than those available at many men’s colleges and was establishing a serious course of study for women that was dynamic and deserving of respect. Mrs. Willard remained the head of the Troy Female Seminary until 1838 when she turned over the reigns of the school to her son, John Hart Willard and daughter-in-law Sarah Lucretia Hudson.

From 1845 until her death, Emma remained close to the Troy Female Seminary as an adviser, teacher, speaker, and friend of good causes. Emma Hart Willard died at Troy in 1870 when she was eighty-four years old. In 1895 the Troy Female Seminary was renamed Emma Willard School in her honor. Emma Willard School still exists today as a college-preparatory boarding and day school for girls in grades 9-12 and the for the post-graduate year, boasting a rigorous academic program enhanced by visual and performing arts, independent study in the community, and a full complement of interscholastic sports.