The (good guys in the) FBI declassified and released a trove of documents about “The Finders,” an alleged secret child abduction network tied to the U.S. intelligence community.

That information led investigators to Tallahassee, Florida, and then Washington D.C., where the group was reportedly based.

During a search of a home and warehouse owned by “The Finders” in 1987, a United States Customs Service (UCSC) officer claims “to have observed a substantial amount of computer equipment and documents purportedly containing instructions for obtaining children for unspecified purposes,” the FBI stated. 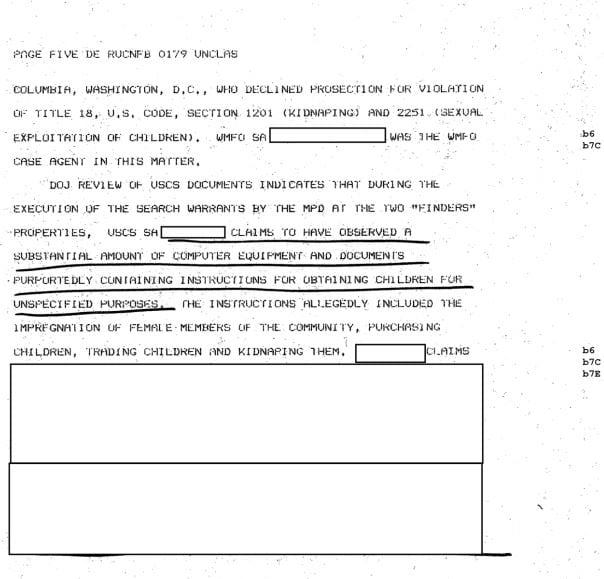 “The instructions allegedly included the impregnation of female members of the community, purchasing children, trading children, and kidnaping (sic) them.”

After several paragraphs of redacted information, the FBI disclosed that someone “has alleged that the Finders are involved in a well-organized child abuse scheme, and that [redacted] in conjunction with the State Department, and the FBI’s foreign counterintelligence section, conspired to cover up those abuses.”

“The source reported children were used in rituals by the groups, but reported source never observed any actual child abuse,” the declassified files stated.

Subsequent searches using testimony obtained by children and witnesses led investigators to a Virginia farm where they found “evidence of satanic/cult rituals” and cages that “witnesses revealed were used to keep children during their visits to the farm.”

The children “also talked about other children in Washington D.C., and stated that they were under the control of the ‘game caller,’ [redacted],” the file stated.

But curiously, an FBI Washington field office memo stated that “all evidence obtained” at the two “Finders” properties produced “no evidence of child sexual exploitation, kidnapping, or any related crimes.”

A former member of “The Finders” told detectives in an interview that he had “done work involving security protection for the FBI, NSA, and other government agencies,” and the documents further reveal the CIA was secretly involved in the investigation.

Interestingly, someone contacted the Washington Police demanding that information about The Finders be classified to the “Secret” level and recommended that the FBI Washington Field office no longer receive updates of the investigation.

Read the FBI documents on “The Finders” in full below:

The Finders Part 01 of 01 by Jamie White on Scribd

Not a single mainstream media outlet covered the release of these previously declassified documents that prove that the children who were raped, tortured, and victimized by pedophiles and Satanists were telling the truth. The perpetrators got off mainly because of the False Memory Syndrome Foundation, a Trojan horse front organization created by pedophiles, and the lie that there were no tunnels beneath the school as the children claimed. Former Head of LA’s FBI turned retired investigator proved the kids were telling the truth and so does the released documents, but no one besides alternative media have mentioned it.

BELOW: Derrick Broze breaks down a second FBI document dump related to The Finders cult.